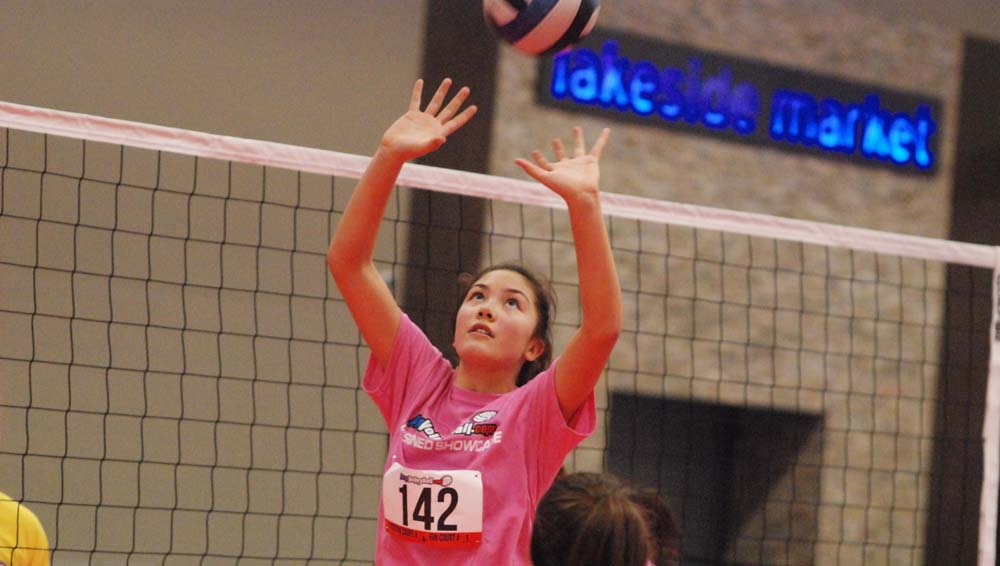 An arctic blast covered Cleveland in snow and ice on Friday evening. Perhaps that explains why so many Canadians shined at the PrepVolleyball.com Unsigned Showcase run for the third year in conjunction with the JVA Rock ‘N Rumble.

About 50 college coaches braved the conditions to watch 160 college hopefuls (a 1:3 ratio!) get put through the paces by an experienced coaching staff headed by Munciana’s Mike Lingenfelter. The event, in two sessions, was high energy and included a few new wrinkles. For the first time, serves were measured using a radar gun and recorded as part of the testing. Video was taken of every participant and free for their use. And jump was measured not by Vertec but by use of VERT jump monitors.

Sydney Morris, a 5-9 junior RS from Oshawa, one hour east of Toronto, first caught my eye in the serving line, as she was sending rockets toward the radar guns. Moments later, a coach shared that “Number 22 jumped 33 inches.” Turns out it was Morris, whose father played volleyball in Canada and was known for his leaping ability. Morris, a former dancer and current track long jumper and basketball player, also showed off an impressive hit set from either pin. She became an easy choice for Session I MVP. 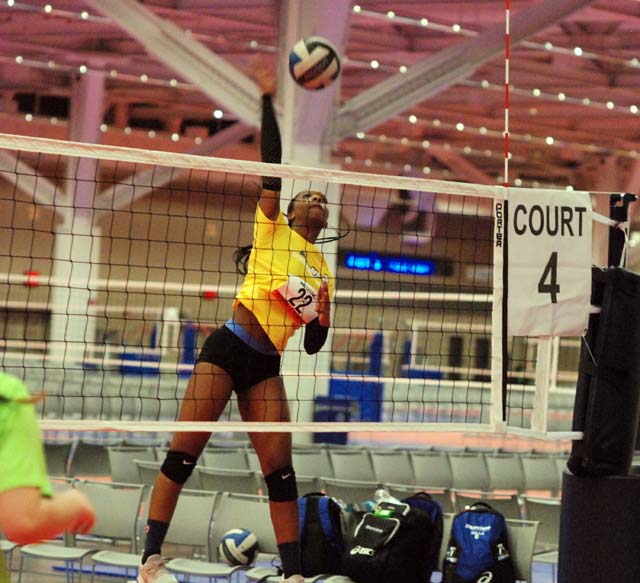 Morris said she’s like to come to the States to play collegiately and one day play for Team Canada and internationally. She got off to a good start towards those goals with a strong Showcase performance. College coaches wanting to watch Morris in game action can check her out playing for Leaside17.

Morris was hardly the only Canadian to shine in Cleveland. For the second straight year, Halton Hurricane16U Black setter Phoenix Lee, a 5-8 sophomore, stood out. Coaches on the setting court noted her good feet and fast jump sets. Lingenfelter commented that she might make a high-level libero someday.

Lee’s 16U Black teammates Sasha Van Der Merwe, a 6-0 sophomore RS with a heavy arm; Emily Foest, a 5-11 freshman outside who “hits the crap out of the ball” and athletic, speedy 5-11 sophomore MB Eden Punch, also caught the attention of our staff.

In Session II, our favorite setter was Chayse Victoria, a 5-10 freshman from Halton Hurricane 15 Black. Strong and athletic with efficient movement skills, Victoria’s high contact point had everyone excited. The other setter who stood out, 5-9 sophomore Carly Anderson, exhibited fast hands and a good release. She just so happens to be Victoria’s club teammate!

Another Canuck, 6-2 junior middle Ashley Ditchfield, from Sky Volley U18, was one of our two Session II finalists for MVP. She hit a heavy ball at a high contact point and showed a knack for finding corners. Ultimately, we went Stateside and honored Michigander Rachel Speck, a 6-1 junior middle.

Speck was called the “best we saw” by the coaches on the middles court. “Hits a fast ball,” “great angles,” “all three tempos” and “blocking elbows above the tape” were some of the comments we heard about Speck, whose vertical was measured at 26 inches.  When we sat down to talk with Speck, who plays for Michigan Elite East U17, we discovered that our coaches had a discerning eye collectively. It turns out that Speck not only broke her high school team’s single-season blocks record this past fall, but she also led the entire state of Michigan in hitting percentage! Her high school team reached a regional final in Class C.

Speck told me that she started to play volleyball in eighth grade after playing all of the sports – basketball, track, swimming to name a few – while growing up. She has narrowed her focus to volleyball and running track in high school (the 200 and high jump (pr is 5-0)) and hopes to find a DI or DII volleyball school she fancies within nine hours of her Whitmore Lake home. Her current plan is a major in political science or physical therapy/exercise science. 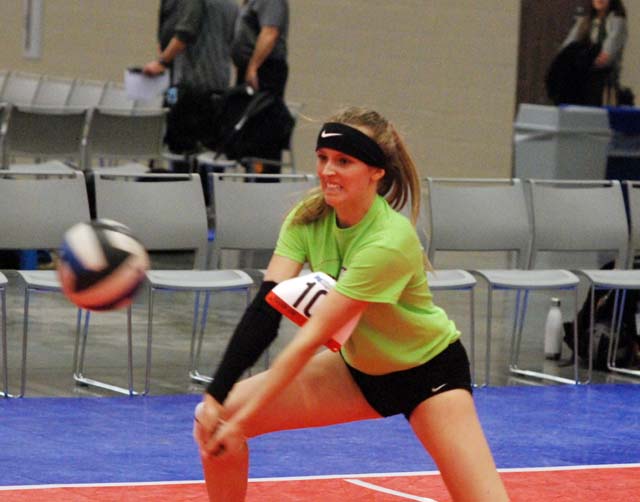 Below are some other “Showcasers” who grabbed our attention on Friday, with comments if we have them. It is by no means an exclusive list of the impressive athletes who spent time with us in Cleveland. Every year we find that we see better-conditioned and better-trained athletes. Finding collegiate homes for most or all of them should be a snap! 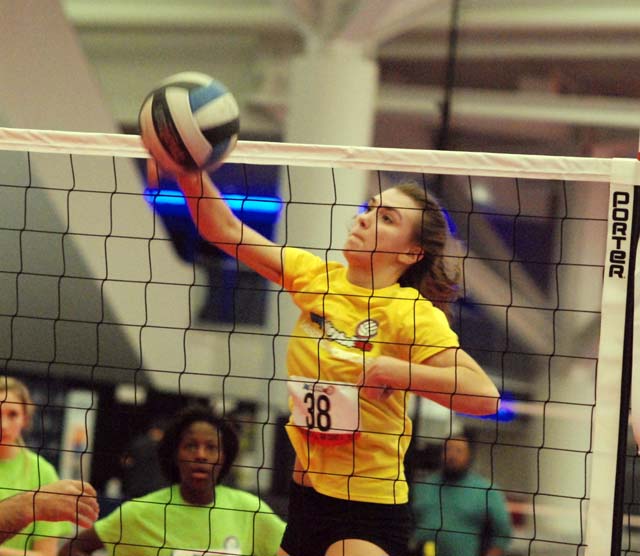 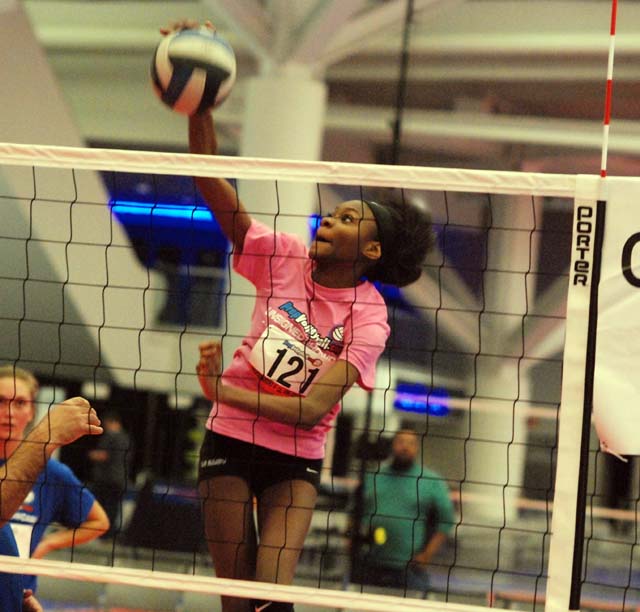 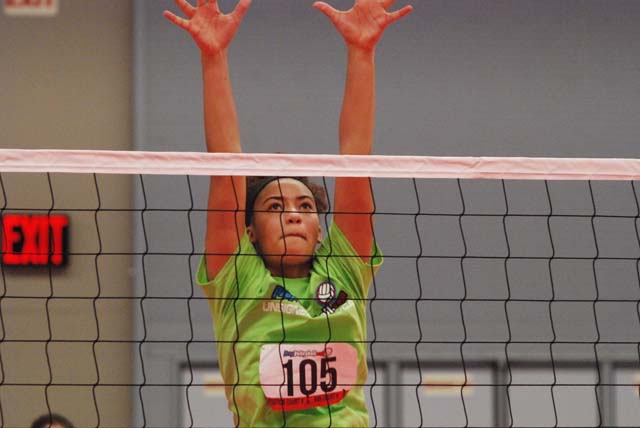