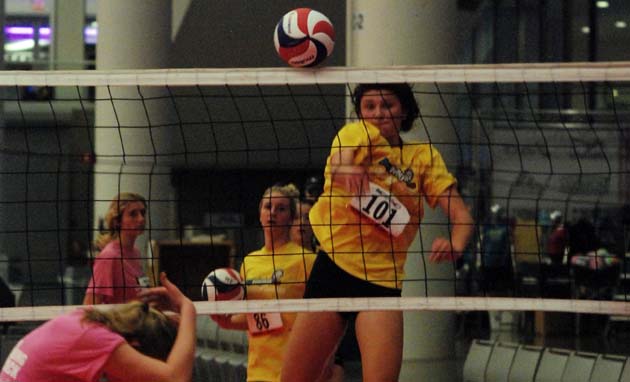 Unified Oh Paige Briggs was one of many impressive arms in Cleveland. The sophomore also showed off a 9-11 jump!

Let’s start with our session MVPs: Dick, who played for Team Ontario last summer, is a strong-framed 9-11 toucher with a plus arm.

Said Beth Schulz, her coach with Niagara Rapids Volleyball: “Sadie is the most well-rounded player I’ve coached in 25 years. She’s physical, obviously, but is the ultimate team player.”

Catch Dick this weekend in Cleveland and upon her return to the States over President’s Day Weekend at the Capitol Hill Classic in d.C. Almodovar, the daughter of two collegiate vballers, led her varsity HS team in kills as a freshman and jumped 9-9 ½. She’s hard to miss, because she’s the one always hustling, always shouting encouragement, always pushing herself to do every skill better. She’ll grow and be more physical, which is great, but the stuff that makes her stand out now will always be there.

“I work really hard and talk a lot,” she said. “If you want to be on the court you should do whatever it takes to be the best player you can be.” With only 180 or so participants, to have five jump touch 10-0 or higher and have several others at 9-11 was most impressive. These kids came in ready to show off their best selves! Here were our five who own the rim:

The 180 participants represented a 90 percent increase in attendance from last year’s inaugural event. Over two sessions, coaches from Munciana put the players through a spirited workout in front of at least 60 appreciative college coaches across all enrollment divisions while parents took in the free recruiting seminar, which included college coaches from Harvard, Minnesota, West Virginia, The Ohio State University, Auburn, Urbana, Northwestern and Miami of Ohio.

After warming up, the kids started with jumps, including a broad jump to test explosiveness. A 5-3 freshman libero, Lauren Vrban of Utopia VBC, didn’t jump the farthest but her 8-1 jump certainly was most impressive. Once positional drills started, most impressive was the number of quality arms came to show off their stuff. In addition to Dick, Hunt and Kabengele, these other hitters also distinguished themselves with their power display:

LIBEROS don’t get much love at showcases, as colleges always seem to be looking for bashers first, setters second and, oh by the way, “who’s that passing and talking and constantly in motion?”

Walz, our libero MVP, had coaches waiting to talk to her afterwards because of her strong passing, big swings from the back row and nonstop encouragement.

“Your team should be your second family so you have to communicate with them on and off the court,” she said.

Other libero standouts included the following: Freshman Aiva Smith getting her dig on

There weren’t that many MIDDLES participating but some made their mark. Our MVP, Hogan, drew praise for her very high contact point.  The staff also liked senior Karina Pressoir of Lake Nona in Florida for how athletic she was, Ivy’s ability to put her hand on the ball and the frame of junior Abbigail Gillson of NOVA.

Finally, there were several SETTERS who made coaches take notice. In addition to our MVP, Duffy, who was praised for her court sense and jump setting, coaches really liked the spunk of Maverick sophomore Megan Brzozowski and the overall athleticism of Halton Hurricanes freshman Phoenix Lee.

Other setters who stood out:

When each session was complete, master trainer Mike Lingenfelter brought the sweaty groups together and praised them for having the courage to show off their best selves.

“I’m here just to get experience and try something new,” said Ott. She and her fellow participants got much more than that: they got the opportunity to shine!