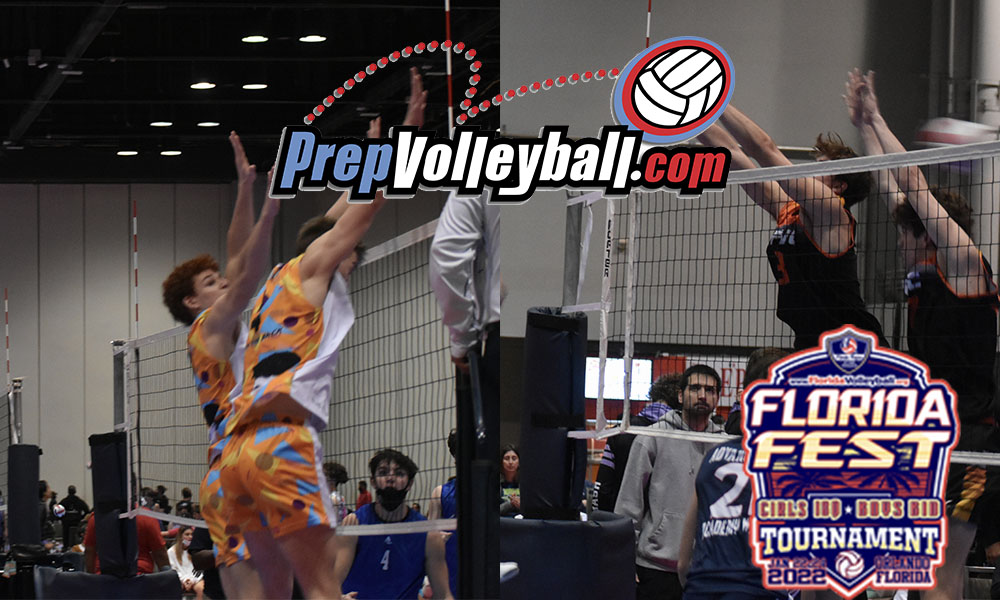 Today we’re serving up another 10 To Watch, but this time is ten boys teams that impressed at the Florida Fest Qualifier and Bid Event. So without further ado, let’s address who impressed at Florida Fest.

The 18 Open champs showed out over the weekend, going 7-1, hoisting the hardware, and double-qualifying as they claimed a big at the Boys Winter Volleyball Championships in Chicago. The feat shouldn’t surprise when you look at just some of the talent on the roster for 352. Libero Chris Connelly is headed to Long Beach State, as is setter/RS Ryan Peluso. Middle blocker Cameron Thorne appeared on our stars list over the weekend and is headed to Grand Canyon for his collegiate career. Lewis will get a solid, fundamentally sound outside hitter in Nico Paula, and LIU has got Logan Whitaker coming it’s way.

Ocean’s Bay’s top 18’s team finished third overall with a 5-3 record at the Fest and snagged a bid in the process. After finishing just outside the top ten in Chicago at the Winter VB Championships, it was a quick turnaround for a team with some fantastic athletes. Penn State commit Caden Day is one of those athletes who can take over a match, while setter Brayden Green, a Wentworth commit, can run a highly efficient offense. Then there’s Belmont Abbey commit Zach Puentes and fellow middle blocker Jibriel Elhaddad, who are both quick, athletic blockers that offer a dangerous attack on the offensive side. Lithuanian national beach player Saulius Vilkelis may be new to the American club scene, but this junior is already hanging with the big boys.

This vanguard team plays a very well-rounded game, and you can’t help but watch them and just say ‘wow.’ Whether it’s libero and UCLA commit Coleman McDonough, menacing 6-6 middle blocker Nick Bennison, or smooth-moving setter Josh Culpepper. Vanguard is dangerous from any position and was extremely fun to watch, specifically because they play such a clean and efficient type of ball with a great pace to the offense.

Ocean Bay took home gold in 17 Open, finishing undefeated at 8-0, earning a bid to USAV Boys Nationals in Las Vegas. UCLA commit Thiago Zamprogno has been tearing it up in the middle for OB, while outside hitter Quinn Bishop has created a lot of buzz and collegiate interest with his play at the left pin, as has setter Logan Taylor who was also an AVP Junior National champ in 2021.

This A5 team plays with a chip on it shoulder, and we’re here for it. Setter Rishi Krishnan is a battler, willing to throw his body on the line to get to a ball. He’s not afraid to step in and get take a big swing or hit the floor to keep a play alive. Outside hitter Theo Hackett has a cannon for an arm. Callen Furgeson is another outside that can be dangerous and passes a great ball in serve receive. They finished fifth in 18 USA at the fest and second in the 18 Boys AAU Southern Power Super Regional.

Vanguard played phenomenally this weekend, winning five straight matches in pool play before suffering a pair of losses before playoffs. Still, the talent on this team is undeniable. After a thirteenth place finish at the Winter Volleyball Championship, they bounced back well at Florida Fest thanks to solid performances from setter Parker Grantt, right-side hitter Daniel Latham, and libero Adrian Kolb. A third-place finish probably wasn’t what they wished for, but it was enough to earn them a bid to nationals and a chance to continue getting better at each tournament.

Miami United took home first place in 16 Open after defeating fellow Floridians Orlando Gold 16 Black in the gold bracket. This team played some high-level ball over the weekend, especially setter Tyler Johnson and libero Andrew Ovalle. The duo showcased some serious skillsets and kept the team in system and scoring points on both sides of the ball. The pair helped facilitate the team’s victory over the weekend and a top ten finish in Chicago last weekend.

Excel’s third-place finish was enough to earn them a bid for 16 Open, a team anchored by solid performances from setter Kaden Jenkins whose fiery passion for the game elevates him as a strong leader on the court. It also helps that he can dish the rock with incredible accuracy and can get his feet under difficult passes and digs. But that’s something he didn’t have to deal with too often, as libero Mason Grubbs was all over the court picking up the ball and keeping the team in system. This team plays with attitude and heart, and on their best day, they can play with anyone.

15 Lime Edwin silver medaled in 15 Open, going 7-1 throughout the tournament. Setter Logan Rogers is a fast setter that can get his hands around just about any ball. He’s got a pair of outside hitters in Alexander Pollan and Kevin Cornieles that can stack up points. So far, Florida Fest marked their highest finish of the season, and things are only looking up for this team.