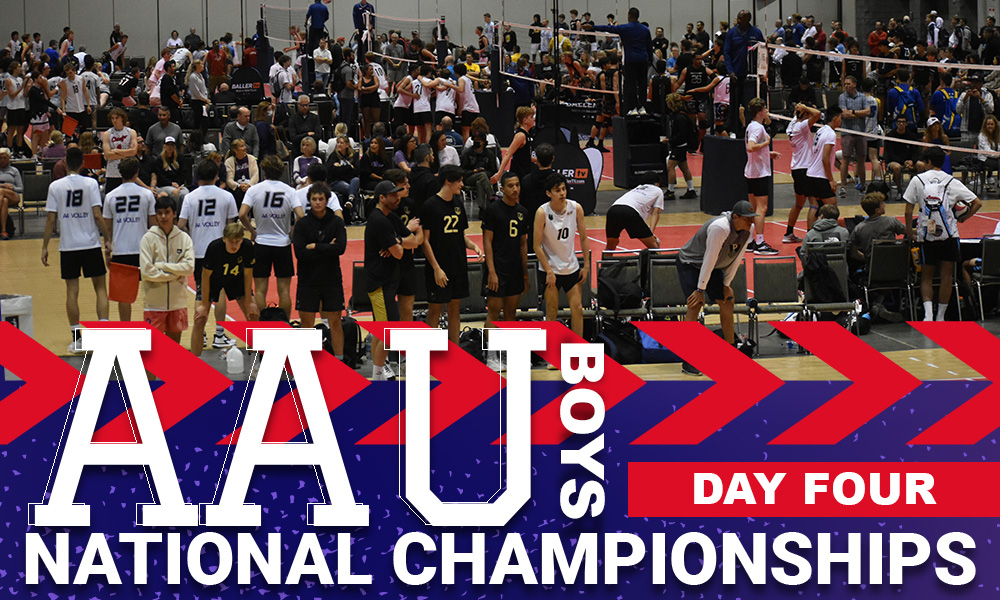 Cali was King on Championship Friday at AAU Boys Nationals!

Welcome to our quick recap of the AAU Boys National Championships. It was an exciting day filled with uplifting victories and upset loses. California was the big winner on the day as every champion from 15-18 Open hailed from the Golden State. Let’s take a look!

In an all-California final, MB Surf 15’s-1 Asics and Bay To Bay 15-1 battled it out in a duel of the fates to see which Golden State squadron would take the hardware back to their respective clubs. MB Surf was eventually crowned champions after dispatching both HPSTL B15 Royal and Team Rockstar 17Rockstar in two-set sweeps, holding both opponents to 20 points or less in all four sets. On the other side of the bracket, Bay To Bay had its hands full with an upstart Ultimate B15 Gold team out of Illinois that pushed the California club to three sets in the opening round before sweeping fellow Californians MVVC 15 Red 25-21, 25-19 to earn a place in the finals.

Once there, it was a high-entertainment back and forth battle with alternating long rallies and emphatic kills, arguably one of the best matches of the entire competition. Set one ended in favor of MB Surf with a somewhat lop-sided score of 25-12, but the play in between the score lines didn’t accurately portray how close this set was in between the court lines. It was followed by a neck and neck set two with the crowd on pins and needles. Tied at 20-20, MB Surf put on a blocking clinic, shutting down the previously successful setter-hitter combo of Alexander Lee and Sindhunandan Udhayakumar that found success throughout the weekend for The Bay. Middle blocker Kyle Boger and right-side hitter Grayson Bradford were a brick wall at the left pin, which came in clutch for MB Surf, who took set two, the match, and the championship by a score of 25-23.

It was a battle of the bays in 16 Open, as Bay To Bay 16-1 and Balboa Bay 16 Blue went toe to toe in the championship match, with Bay To Bay claiming victory. But, they first had to eliminate one of two non-Cali competitors when they faced off with MVC 16-Joe out of Wisconsin in the first round of play. The Club out of the Badger State kept things close, but not close enough as the Bay walked away with a two-set sweep 25-22, 25-21, one step closer to hoisting the hardware. Their next opponent would prove just as difficult, but this time it was another West Coast wonder team, 949 B16 Black, that tried to show Bay To Bay the way back to San Jose. However, they once again busted out the broom and swept 949 25-18, 25-22 to solidify a place in the finals.

Balboa Bay earned its finals spot the hard way, clashing with Team Rockstar 16Rockstar in the opening round. It was technically a sweep, but it did take a few extra points to close the curtains on Rockstar 25-18, 28-26. Pinnacle was on deck next as PAC 16-MS wanted its chance to prove its prowess on the national stage, and they got mighty close. After dropping the first set 25-18, Pinnacle pushed back and snagged set two 25-19, but in the third, deciding set, Balboa Bay broke away late in the match, taking the victory and taking its place in the championship match 15-11.

In the final, the championship was decided in two sets, but only two and three points, respectively 25-23, 25-22. Bay To Bay 16-1 edged past Balboa Bay 16 Blue thanks in part to the setting skills of Kali Duvvuri in lock-step with right-side Kai Rodriguez. The two were a force to be reckoned with in both sets. Balboa Bay’s blonde bombers Caleb Sapp and Benjamin Winokur were big for the squad, but unfortunately, their efforts, combined with their teammates, came up just shy.

In yet another three-setter, Balboa Bay right-side hitter George Bruening was lights-out phenomenal, clicking with setter Cole Schobel as a go-to hitter. The two were highly impressive throughout the weekend and finished off the team’s Nationals run on the highest note. MB Surf’s dynamic duo was outside hitter Victor Loiola and setter Jason Walmer, who kept the team in it the entire match.

Finally, in 18 Open, it was one final California standoff, as OCVC 18-1 and Bay To Bay 18-1 squared off on the sport-court in pursuit of the crown and title of AAU National Champions. OCVC entered the finals after back-to-back sweeps over Adversity 18 Adidas and AZ Fear 18 JB, giving up 20 or more points in just a single set on the day, and exited champions. They also held opponents to 15 points or less in the other three, a testament to the team’s defensive prowess and endurance over four days of competition. In the first round, Bay To Bay dispatched MB Surf 18’s-1 Asics in two straight sets (25-20, 25-18), then repeated that feat against Pulse 18-1.

In the final, OCVC ran away with set one 25-13, thanks to some ridiculous bounce and offensive ability of middle blocker Emmanuel Wandji and right-side hitter Jake Olson. They’re a pair of top-tier athletes that can bury a ball and put up a big ole block. Behind them, libero Charles Jeffs was phenomenal on the floor. He was consistent in serve receive and covered a done of court on defense. For Bay To Bay, setter Theoren Brouillette‘s dogs must be barking because he got his feet under some difficult balls and put up some absolute gem sets. They handled the pressure of being behind well, specifically at the net, where outside hitter Cos Masters and middle blocker Christopher Hersh were high-impact. They shut down the right pin well enough to take set two and force the third, deciding set.

That concludes our in-person coverage of Boys AAU Nationals. But stay tuned, as we have All-Tournament Selections and more articles looking back at all the exciting matches and teams in the coming week.