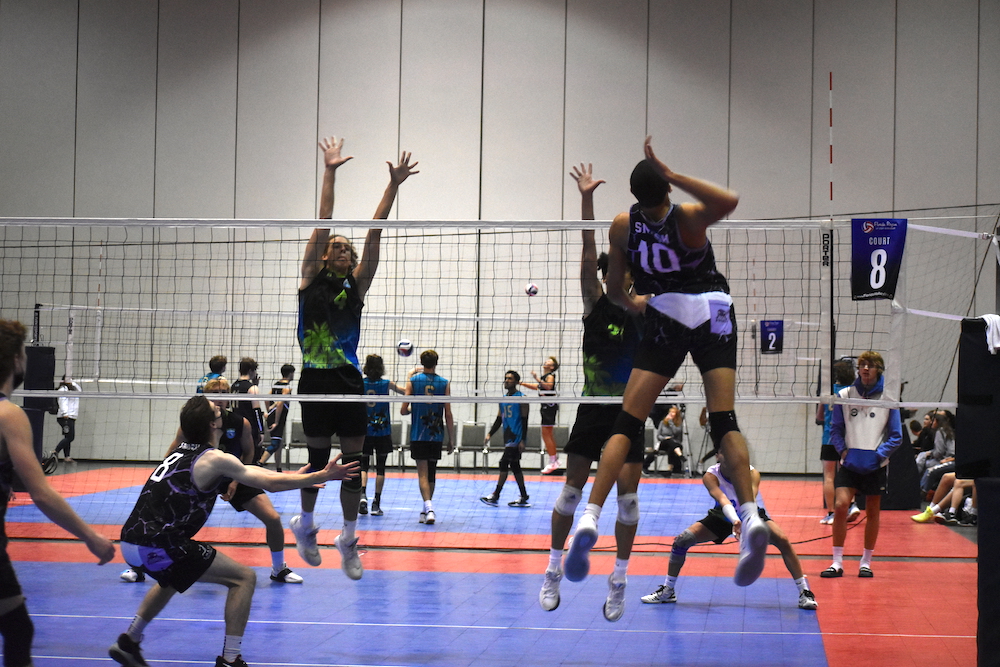 We’re still getting our bearings with the boys, so we’ll keep our recap short, focusing only on the 18 Open Division. However, our stars will range from the 15’s through the 18’s. On that notes, let’s get started and see who’s got a shot at the pair of bids up for grabs at the end of play on Championship Monday.

We hate to take the wind out of the sails of our first boys coverage, but as WPVC 18 Boys Armour Black and 352 Elite 18 Lime Roger have both already earned previous bids, Vanguard 18 Gold Webb and Ocean Bay 18 Quiksilver South are about as locked in as they can get. However, that doesn’t stop up from talking about the newsworthy play of all four teams.

WPVC and Vanguard lived up to the expectation of a knockdown dragout brawl and then some. Separated by just four points in the first set and two in the second, this match had the fans on the edges of their seats, trading big swings, big blocks, and high-speed top-spin serves that’ll have your head spinning like a laundry machine. Winter Park’s resident high flyer, Isaiah Fedd did his thing, touched the clouds and brought the ball back down to earth. Vanguard middle Nick Bennison was menacing, a black hole in the center of the court, where balls just couldn’t get through, and those that did went straight to libero Coleman McDonough, a sound defender that picked balls like he was vacuuming a floor. We’ll have the rematch on Monday at high noon for a place in the finals.

On the other side of the bracket, Ocean Bay 18 Quicksilver South will take on 352 Elite 18 Lime Roger, a rematch of today’s match, in which 352 Elite swept Ocean Bay 25-22, 25-15. Now that these two teams have a feel for each other’s play, this one will be a barn burner. Luis Perez Concepcion dawned the libero jersey on day two for 352 and he did not disappoint. He’s a lockdown defender who reads attackers like a book, and can dish the ball out as well. Christopher Connelly is another 352 hitter to watch out for, though listed at libero, he went to town at the left pin today, and was specifically strong in the team’s match against Smash Boys 18-1 utilizing his defensive prowess to keep plays alive, and finishing them in the front row.

Luis Perez Concepcion, Libero, 352 18 Lime Roger – A great reader of the game, Perez Concepcion covered a lot of court on day two, and was great at dishing the rock in a pinch.

Jaidin Russell, Right-Side Hitter, Smash Boys 18-1 – Russell has a gorgeous approach and is dangerous from the front and back row, he also knows when to swing away and when to place a ball and give his team another shot at scoring.

Owen Holowecky, Setter, Ocean Bay 16 Quicksilver – Holowecky operates with the patience of a zen master, waiting for the right moment to choose his hitter, giving them maximum potential for success.

Kaden Jenkins, Setter, Excel 16 Red National – Jenkins plays with a fire inside, and amps his team up in high pressure situations. He played some inspiring volleyball on day two.

Mason Grubbs, Libero, Excel 16 National Red – Grubbs has great court awareness and can cover a large amount of space with ease. He played some big brain volleyball on day two, helping his team earn a spot in the gold bracket.

Reed Bonkovsky, Right-Side Hitter, ODVA 17 National – At some points was the shortest player front row. on both sides, but never played like it. He plays with the spirit of a giant.

Brenten Glass, Libero, 352 Elite 17 Lime Thiago – Glass definitely isn’t made of glass, putting his body on the line to make some ridiculous saves. At one point he saved a ball, got his foot stuck in the net that divides the courts, and then took the whole thing down with him. But, he got up and just kept playing.

Aidan Kolb, Libero, Vanguard 17 Gold Kelso – Kolbys wasn’t afraid to get his jersey a little dirty on day two, dusting the floor and making some pancakes.

Callan Fry, Libero, Ocean Bay 15 Quiksilver – A steady serve-receiver, Fry kept the team in system more often than not on day two. His mechanics are sound, and he makes passing look too easy.

Logan Rogers, Setter, 352 Elite 15 Lime Edwin – Rogers has the ability to walk a tight rode to get his hands on a ball, and somehow stay out of the net. He put up some absolutely buttery sets on day two.

Theo Hackett, Outside Hitter, A5 Boys 18-Carlos – Hackett is a head hunter with an explosive cross shot. He plays an aggressive game that is highly entertaining to watch.

Rishi Krishnan, Setter, A5 Boys 18-Carlos – Krishnan is super strong on the ball and uses some great footwork to get to it and stop on a dime. He can chuck up a very hittable set in the tightest of situations.

Chris Connelly, Libero/OH, 352 Elite 18 Lime Roger – Connelly is slightly undersized but plays far above his height. He can blast a ball off the block, and put up one of his own. He also passes dimes in serve receive.