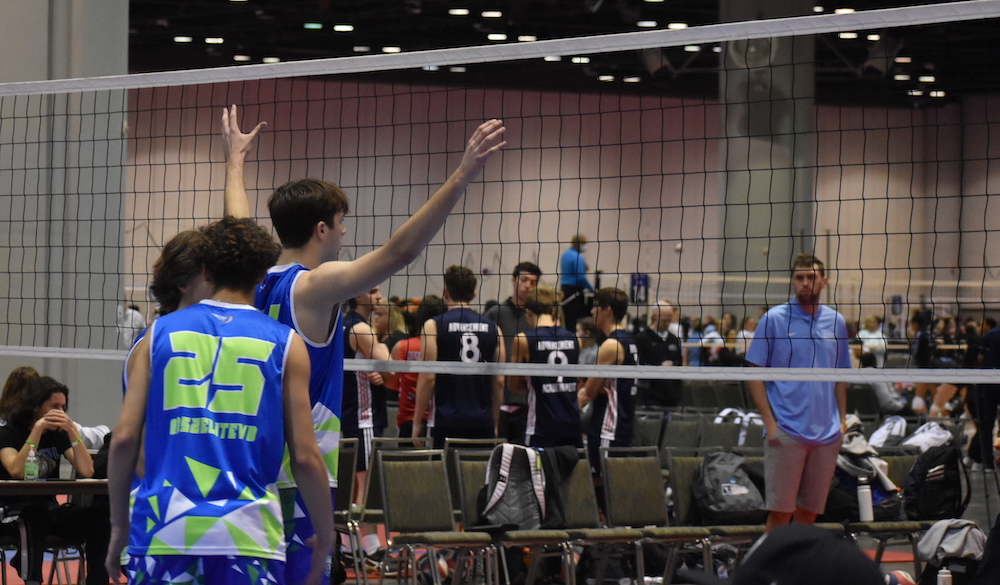 With another boys qualifier in the books, here is an update on those who have already punched their tickets and qualified for the 1Boys 8s Open Division for the USAV Boys Junior National Championships in Las Vegas. Something interesting to note: There seems to have been a paradigm shift in AAU vs. USAV Nationals competition and attendance, which is why you’ll see more teams declining bids for USAV Boys Nationals. We’ll have more on this in the coming weeks.

With just two bids up for grabs in the six-team competition, Bay to Bay 18-1 punched its ticket, winning gold in the process when they defeated MVVC 18 Red in the finals. MVVC declined a bid to nationals, which then passed the bid onto third place PRVA U18, who finished third. Bay To Bay went wire to wire without dropping any of the team’s six matches and lost one lone set in the finals against MVVC. PRVA won three of five matches, which was enough to take home a bid to Nationals, along with the third-place finish.

In what might be the ultimate trickledown ‘bidonomics’ feat, the four bid winners from the 18 USA division at No Dinx finished tied for third and fifth place. Both Aspire 18 Gladiators and Academy 18 HP Boys Zach finished with 5-1 records and tied for third, while Slainte 18 Platinum finished tied for fifth with a 4-1 record, and BAVC 18 Black Sebastian finished at 3-2 in fifth as well.

The field at the Boys Winter Volleyball Championships was 39 deep, allowing for five fortunate teams to qualify for USAV Nationals, starting with 352 Elite 18 Lime Roger, who finished first overall with a 9-1 record. After that, the bids were dished out to WPVC 18 Boys Armour Black, who finished tied for fifth with a 4-3 record, 13th place co-finisher ACAD Boys 18 Red (4-4), and StepUp 18 Elite, who finished tied for 15th at 2-5.

In 18 USA, High Flyers 18 Red took home silver and one of whopping eight bids. High Flyers notched nine wins in ten matches, including a win over ODVA 18 National, who also took home a bid. ODVA finished tied for third with eight wins and just one loss. Fifth place AJAX VB 18-1 Gold took a bid as well as a 5-3 finish in Chicago. Tied for 13th, A2 18 Navy, Core Boys 18 Elite, and Uno Boys18 Elite all took home bids, along with Drive 18 Boys Blue.

GSL 18 Elect Shane/Ben won silver at the SCVA Junior Boys Invitational, finishing with a 6-3 record and taking home one of two bids for the seven-team division. Bronze medal finisher Pulse 18-1 also took home a bid and lost just one of seven matches in the process. The gold medalist Pacific Rim had previously qualified at No Dinx, so the second bid went home with Pulse.

Smash Boys 18-1 and MVP FL 18 Black finished fifth and sixth respectively, but as four teams that finished higher each previously qualified or declined a bid, they went home with their tickets punched to Nationals in Las Vegas.

Team Colorado 18 Black snagged a silver medal and a bid to USAV Nationals with the team’s 7-2 performance in Orlando, as did fifth-place EXCEL 18 National, who notched six wins in eight matches.

Bids and results from the Boys Southwest Classic will be updated later this week!