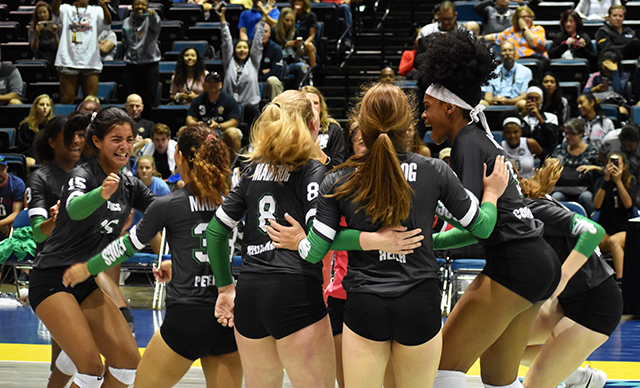 MADFROG 16 Green returns nine and adds two from last year’ 15 USA National Division Champions. Who else is looking to reinforce their rosters?

Welcome to a Cyber Monday Club Dish. Today we’re taking a look at over 20 teams in the 16’s age group that are returning some key players and reinforcing their rosters with some new faces.

MVVC‘s 16-Red roster has returned four, including 5-4 setter Kendell Erpenback and 5-10 OH Carolyn Dormary. Without giving too much away, coach Chris Cader said, “the team should be a touch better; we picked up a couple of new players that will hopefully make us a bit stronger.” The team finished 20th overall in Northern California’s Power League standing.

According to Florida Gulfside Academy‘s Gulfside 16 Navy coach Stephanie Martin, “We have added some great players gaining height and power at the net. The team will need to learn each other and develop the chemistry. Look for Gulfside to be a contender in the top five again for Florida.” Helping out at the libero/ds position will be new additions Gracie Lane and Ella Seiber, both players offer a surplus of energy and quickness. Southpaw Samantha Mora offers some improved blocking on the pins, and 5-11 MB Emma Tuchbaum brings a wealth of experience in the middle position. Dominant attacker Breneah Rives and setter/floor general  Brayden Hipp also return.

1st Alliance of Illinois return every member of last year’s fifth-place 16 Silver team and add 6-3 pin hitter Chelsea Thorpe and 6-2 pin hitter Ari Joubert. Head coach Beth Baetzel said the team is looking to medal this year, and they’ve got the potential to do so.

In Indiana, Circle City is looking to avenge last year’s middle of the pack finish in the open division. Scott McQueen‘s 16 Purple squad should be much stronger this year, according to him. The addition of 6-0 OH Tori Woods, a versatile player that can play either pin and back row, should add plenty of depth. 5-6 defensive specialist Emma O’Connor should also bolster the back row. Returning OH Chloe Chicoine, a freshman all-stater should also help 16 Purple finish higher this season.

Epic United achieved a third-place finish in the 15 National division last season, and this year’s 16 Elite Rox team brings back all key members and add 6-2 RS Caroline Krueger as well as 6-0 OH Meghan Gaffigan. 5-9 setter Rachel Rossman should be drooling over the opportunity to set these two hitters as well as returning hitters Kendall Schara and middle blocker Lexi Broyles.

Team Indiana added four to their 16-1 Heat roster, including 6-4 MB Gabby Dean, 6-1 OH Molly Mungle, 5-10 RS Kyla Kante, and 6-0 MB Ariel Helm. According to coach Rich Coleman, they should be a “Solid, hard-working defensive-minded team that has added height and offensive firepower. Emma Halter will continue to lead the back row while Naija Gadis will have a lot of tall, fast offensive options from which to choose. The hope is that the team can come together quickly with all of the new additions, it will be a fun group to work with this season!”

In Kansas, PVA’s 16 Elite roster returns seven from last season’s fifth-place USA division finish. Skyler Weaver and Valencia Zamora are two defensive additions that should add some depth and variety on defense. 5-8 S/RS Jasmine Dulan and 6-2 MB/RS Ava McDonald will also add some interchangeability and variety on the offensive side. Dulan was a member of the Kansas Class 6A all-state tournament team and won the state title with Blue Valley. 6-0 OH Ava Martin was an All-State Honorable mention and class 5A state champion with Aquinas.

Metro Volleyball Club of DC returns 11 of 12 from last year’s group, including 6-0 Laila Ivey, who is a high flying outside hitter that touches 10-4. 6-1 Heavy-hitting MB Hannah Sherman and 5-11 setter/RS Sarah Jordan from Loudon County round out the returners. Newbie Zaria Ragler a 6-0 MB, touching 10-2, is coming off of a Maryland State High School title at Arundel High School. 5-9 libero/DS Penelope Hiepler is a Chicago transplant and should provide a massive amount of technical ability to the group.

16-Black also reinforced their roster, returning just two players from last season. A pair of 6-0 setters, Keya Hunt and Emma Berran, will display their buttery hands and lead the offense. The defensive duo of Courtney Haugen and Maria Chapman should provide some newfound quickness and defensive instinct in the backcourt. On the outside, 6-1 Katelyn Bodnar, 6-0 Alex Lloyd, and 5-11 Allison Elliot will all play a significant role.

In Nevada, Vegas United has bulked up their 16-Navy roster beginning with a new head coach, 2000 Olympic setter Charlene Johnson. Also, newbies include 6-0 MB/RS Jocelyn Sanders, a physical presence, good jumper, and high hitter, 5-4 libero/DS Lali Makaiwi, who will be playing up, a very talented passer that spent the fall season as a varsity libero at Shadow Ridge, and 5-10 OH Fia Tagaloa, a wide-ranged player that has played every position in high school.

Ohio’s Cleveland Volleyball Company has also improved their squad that finished 19th in the 15-Open division at Junior Nationals. 16 Black head coach Jessica Cibroek said, “This upcoming season we are returning eight players from last year’s team. Our strengths will include our dynamic offense and discipline. Our weaknesses are the fact that we may still be a little undersized. We are very excited to start training for 2020. We know the expectations and level of effort/commitment it will take to be a strong force in 16 Open, and we are ready to get started!” New faces include 5-10 OH/MB Emmaleigh Allen, a dynamic player who can play any front-row position, 6-0 MB/RS Keegan Trainor, a significant presence at the net, and 5-8 OH Aly Radalovic, a dynamic hitter with elite court awareness.

Elite Volleyball Training Center has returned seven to this year’s Elite 16 Black roster and adds four new players. 6-5 MB Sasha Stotler should use her strong vertical and net presence to take away tons of space at the net and add some offensive threat. Jaci Carpenter, a club member since the age of eleven, will play OH, providing stability and consistency at the left pin. Right side hitter Anna Boezi should be able to use her 6-2 frame and jumping ability on both sides of the ball and utilize her speed at both the right side and middle position. Guilia Vigilietta, a 6-0 OH, should increase the team’s depth and challenge every player in practice, according to coach Randy Cline.

Oregon Juniors had replaced all but one player on the OJVA 16 Gold roster, 6-3 MB Tess Masingale, who made first-team all-tournament at the 6A classification and won the state title with Jesuit. Moving up from the 15’s team last year are 6-1 OH Tyra Schaub, who was named player of the year in her high school league, 6-3 MB Sophie Scott, 6-2 RS Mackenzie Berger, libero Hanna Nguyen, also a state champion, 5-6 setter Sydney Moltrum, 5-11 MB/RS Reyna Reynolds, 5-5 setter Shaylyn Cecil, and 5-3 libero/DS Emily Paul of 2A state champion Ridgefield.

Tennesee Performance has combined three returners from last year’s 16 Alpha and three returners of the previous year’s 14 Zulu to form this season’s new 16 Alpha squad. According to head coach Dan Dierking, “This is an interesting mix of talent that was split up in many different places last season. The team is comprised of a few returners from the 16 Alpha team last season, along with players who played for TPV 14 Zulu last year. TPV 16 Alpha had a strong run throughout the year, and the players returning have a great understanding of the level of play and the consistency required to play with the nation’s best. The players from TPV 14 Zulu lost in the National Championship last year and brought big match experience with them!” Newcomers 6-1 OH/RS Anna Hartman, 6-1 MB Lanie Bozarth, and 5-9 hitter Alexandra Knueven should bring terminating power and explosiveness to this newly founded team.

Houston Skyline returns seven to this season’s 16-Royal roster. Three new faces should impress this season, according to coach Todd Kolkhorst, ” 6-1 RS Logan Lednicky had a breakout year on our 15-2 team last year and was moved to our 16-1 team for 16 Open nationals last year. Gabi Mansfield, Ava Underwood, and Alexis Dacosta will make up the strongest backcourt in the country. 6-4 MB Kierstyn McFall brings an impressive arm that will add offensive depth.”

MADFROG 16 Green returns nine and adds 6-2 MB Ifenna Cos-okpalla and 5-10 RS/S Ana Heath. According to coach Matt Sipes, “Ifenna should have been on our top team last year. She is a physically dominating player. She will be recruited big time from power five schools. She gives us power, height, and larger block.Ana is one of the best right-side hitters in the nation. She was on our top team the year before and dropped down to work on her setting. She will add strength, hitting power, and athleticism to our lineup. She is a six rotation player. Ifeena and Ana were part of our Black team that won 15 USA Nationals.”

Keep an eye out in the coming weeks for more Club Dishes as we get closer and closer to the true beginning of club season.