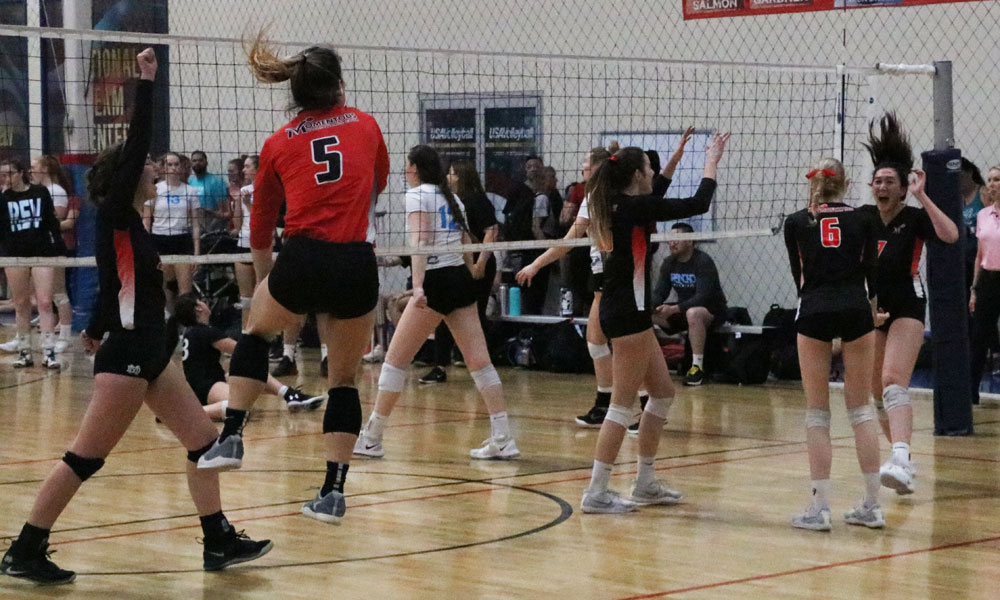 Led by Mater Dei coach Dan O’Dell, Momentous VBC is just one of the clubs in a major rebuilding year at the 17’s age group. See which other teams are starting back at square one this season..

In part one of this special two-part Club Dish, we’ll be taking a look at the 17’s age group. Today we’re focusing on teams that have very few or no returners from last year’s roster, basically starting from square one. Friday, we’ll be taking a look at those 17’s teams that have added a few new key pieces from last season’s well-established rosters. Let’s dig into this dish!

We start in California with the Momentous 17’s squad. The team returns just four to last year’s roster, bringing up a handful of new players from last year’s 16’s group that bounced between Division one and two in SCVA last season. The returning to the roster will be 6-2 MB Emily McDaniel, 5-10 OH Maddy Leitman, 6-0 pin hitter Victoria Holmes, and 5-9 OH/DS Elena Torres. Coach Dan O’Dell is keeping is expectations realistic and humble with this team, stating, “We are hoping for an Open bid… We have the potential to be a good serve and pass team with a mix and good talent across the board…I would think we are in the 50-60 range for national rankings with room to move up if we maximize our abilities.”

With two new setters, Mater Dei‘s Cadence Gronski, and Allie Livingston from Los Alamitos High, there is a ton of ability to maximize. Add in Orange Lutheran‘s Mia Jerue at OH, who adds some great athleticism and blocking, and 6-1 lefty Alexa Niko, and the pins look relatively stable. New libero Katie Day may also add some stability on defense as well.

Colorado Momentum has a brand new roster for their 17-Rachel team, touting two big hitters, 6-3 MB Brooke Copley, and 6-1 MB Whitney Hollins, this team has some strong net presence to build off in the Club Division. Setter Samantha Wilmoth (5-5) should provide some great athleticism quarterbacking the squad, a part of the this season’s Class 3A state runner-up Lutheran High team. Outside hitter Madlyn Cooley (5-10) should play a vital role after finishing this HS season with a conference and regional championship at Cherokee Trail. 5-7 libero Alaina Bakken will anchor the defense.

No Name Volleyball Club will have a whole new look for their 17-Erin team, bringing up three players from last year’s 16’s team and snagging two from last year’s 18-1 team. Club director Doug Chinchar said about the 17-Erin roster, “Headlining the Team is 6-2 OH Audrey Koenig, a Florida State 2021 commit. Last year she was the only sophomore selected to the Florida All-State team by PrepVolleyball. This year her stats were even better. A couple of other contributors on the pins are Kylie Strohlein (OTVA transfer) and Brenna Reinard. Middles Kylie Ciani and Rebecca Bach are expected to make an impact. Defensively, All-county Adriana Lopez and Jenessa Bailey will compete for the libero spot.” With so much talent, chemistry will be their biggest challenge, but if they can iron out the wrinkles, they should look very competitive in the Open Division.

According to Team Indiana 17’s coach Nate Torvik, “This is a new team from top to bottom, so I believe one of the biggest strengths of this team will just be all the newness. New opportunities, new relationships, new chemistry, and the chance to be completely unburdened by any old team baggage. We have enough depth and versatility for these athletes to take the reins of any position. Our back row depth could be a challenge, but we have players that are ready to work hard, learn, and hit the ground running in January.” Some key players to watch will be the OH duo of Sydney Aguirre (5-10) and Sydney Murray (5-9), along with 6-0 MB Regann Jessee and defensive specialist Sophie Weber.

Mizuno M1 also has a new roster for their 17-1 squad. Five players from within the club will be OH Emma Grimm, setter Olivia Koeppen, MB Rachel Schneider, OH Riley Walsh, and DS/libero Ella Wheatcraft. Newbies include 6-4 OH and state champion (Wayzata) Sophie Jesewitz (MN Select), OH Rachel Wieber (Northern Lights), DS/libero Madison Ellman, setter Jasmin Weidemann (MN Select), and the MB duo of Hanna Thompson (Chaska Juniors), and Carissa Richie (MN Select). According to coach and club director Doug Bergman, this team should be “Strong Open Level 17’s. We will be very strong defensively and have many options on offense as we are big outside and very quick in the middle.”

Triangle’s 17 Black team returns just three from last year’s roster, and have a new head coach in Jeff Wismer. Some key players to keep an eye out for will be 5-10 OH Emily Chrysogelos, a Delaware commit, 6-1 MB Carlee Brookes, and 6-3 pin hitter Ryleigh Whitekettle. 6-1 Setter Grace Hammond should command the court with her drive and leadership.

With just three returners as well, Tennessee’s Alliance VBC will have a new look to their 17 Ren squad. According to head coach Jessica Enderle, “Olivia Jones (6-0 MB) brings us some power and consistency in the middle that this team did not have previously. Emma Grace Rossen (5-10 MB) is undersized, but another all-district athlete. She’s quick and gives this team some speed that we did not have last year. Brooke Gilleland (Class of 2022 5-11 OH) is young but comes with ALOT OF power and will replace Lucy Greene, who moved up to 18 REN.” They’ll be joined by the likes of returners 6-2 OH/RS and Butler commit Destiny Cherry, 5-9 setter Kendall Arnold, and 5-6 libero/DS June Padilla.

Summit Volleyball will build off of two returners from last season’s 17’s Nike Blue roster. They’ll look to speed, defense, and setting to get them through the season. 5-6 setter Regan Willms, and 5-8 setter Joy Liu will quarterback the offense, while libero Paige Hartsburg will command the backcourt. 5-11 MB Audey Baergen who garnered second-team All-District with Pearce High, and 5-9 MB Haley Stephens will defend the net.

Virginia Elite added nine new players to their 17’s roster that returned four players. According to head coach Lexi Patton, “The newly added DS/L personnel has provided much-needed ball control. They are very quick and read the game well, which has solidified our passing and defense quite a bit. The pins have provided much needed attacking options giving us the opportunity to run more diverse offensive schemes and systems. The setters have increased the location and tempo accuracy allowing our attackers more range and set options. The middles move very well and are faster in transition, further deepening our offensive options.”

5-11 setter Victoria Blaylock will be dishing the rock to some big hitters at the pins, including 6-0 OH/RS Chloe Maciejewski, 6-0 OH/RS Jackie Mitchell, and 5-10 OH/RS Itxaso Ezcurra-Taiganides, a 4A regional champion and all-conference honorable mention with Wootton High (MD). 6-2 MB Lauren Koelsch and 6-0 MB Emily Mance will look to be a dominant force in the front row. Caroline Poley and Brianna Moss will lead the defensive charge in the back row.

Tune in Friday for part two of our 17’s Club Dish, in which we will be breaking down those clubs that have bolstered their pre-existing rosters with some shiny new additions.