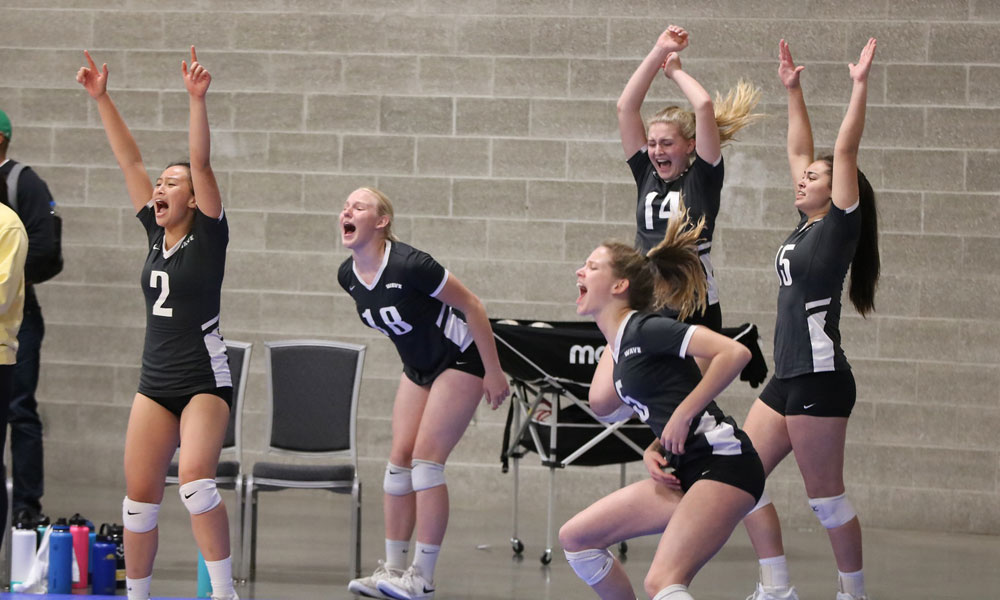 With so much excitement about the beginning of the Club Season, take a look at some 17’s Teams that have added some shiny new additions to their returning rosters…

Welcome to the final installment of our two-part 17’s Club Dish. Today we’re examining those teams with rock-solid returning rosters who have added some new weapons to their arsenals. Let’s get started.

Staying in Arizona, East Valley Juniors will have eight returners and a trio of new faces in their 17N1 Tempe team. Christina Kuras returns to the club and will provide some strong jumping ability paired with a powerful arm and a non-stop motor, always ready to play her best ball. Although newbie Carissa Hayes is still somewhat new to the game, she provides some dominant height and athleticism, and a natural affinity for the game. Samia Bhakta has moved up from the regional team and offers speed, and an aggressively fast arm swing out of the middle. She was a vital part of this season’s Highland High squad that finished in the Arizona Class 6A semifinals. This team finished in the bottom half of the Open Division in last year’s USAV nationals but will look to climb the latter in a significant way.

California’s Rage Westside has bolstered their 17 Gabe roster that finished in the top 20 at last season’s AAU’s in the Open Division. Three new players should improve this team, including Cal Poly commit and 6-2 pin hitter Olivia Keller. She provides a massive arm and some high-level experience to the table, similar to new libero Rein Bocage who has played up an age group for the last three seasons. 6-0 utility player Matalasi Danielson also adds the flexibility to play any front-row position. These additions should pair well with some key returners, Sahitya Krishnamurthy, a 6-0 Northeastern commit and pin hitter, 6-1 attacker Abby Miller, 6-2 MB Maddie Gleason, and libero Grace Xu. Competition within this team should push them to be much more competitive at the Open level this season, as well as providing depth at nearly every position.

After a 47th place finish in last year’s AAU Open Division, Forza1 North has upgraded a couple of positions for this year’s 17 UA squad. New additions, Nicole Briggs, a 6-2 MB and Arizona commit that adds a 10-3 vertical touch and a plethora of athleticism, and 5-10 Hailee Watts, a LAVA transplant and six rotation outside that touches 10-2 and has a rocket for an arm, should compliment returning setter Bia Silva (5-9) very well. The returning of the duo of 6-1 OH Lauren Grover and 6-2 RS and Fresno State commit Preslee Lillard only adds more height and power at SIlva’s disposal. This group is looking to qualify in the Open Division of USAV Nationals.

WAVE Volleyball Club returns 10 of 12 from last year’s team that finished in fifth place at USAV Nationals last season in the 16 Open division. New Libero/DS Meadow Cooper brings a solid defensive skillset and high volleyball IQ to the 17-Rachel squad, as well as a ton of ball control. 5-9 setter Alana Embry will offer some high energy and awareness to the team from her experience on the beach, as well as depth to the position. 6-3 OH/RS Amirah Ali adds some much -needed size to the roster, a robust net defender with a knack for offense as well.

San Gabriel Elite returns nine to the team that qualified for 16 Open last season, including 6-0 OH Peyton Dejardin, 6-1 MB Amiree Henricks-Walker, and 5-11 RS Lola Foord. Coach Hannah Tedrow has brought in 5-3 setter Ali Perez to add the potential of utilizing a 6-2 offense and Maya White, a libero/DS that should solidify the team’s serve receive.

Colorado Juniors returns nine players to the team that finished ninth in the 16-Open Division last year at Junior Nationals. Leadership and experience will drive this team in the form of 6-1 Duke commit and MB Rylie Kadel, 6-2 Penn State commit and newcomer OH/setter Anjelina Starck, 5-11 setter, and Oklahoma commit Peyton Dunn. Fellow Oklahoma commit and libero Sam Anthony will lead the defense. Carter Booth, a 6-7 MB, Minnesota commit and member of the Youth National Team, will no doubt be a huge presence at the net, as well as 6-4 OH/RS Riley Simpson, a Baylor commit, and 6-2 OH Maddie Kinney, a Central Florida commit. Kinley Gomez, a 6-2 uncommitted OH, adds even more depth to this star-studded CJ-17 Kevin squad that shows a lot of potential for a big finish this season.

OTVA returns six to their roster that finished in 11th place in last year’s 16 USA Division and added another six. Newbies for 17 O. TJ include 6-0 Nicole Swindle, a OH/RS that has the potential to be solid six rotation OH, Riley Cullen, a Top Select transfer and 5-10 OH/RS with a hammerlike arm swing, Danielle Dupuis, a 5-11 RS/MB with a big wingspan and even bigger presence at the net, and the defensive duo of Caroline Davis and Emma Claire Cross, two absolute grinders in the backcourt with well rounded passing and defense.