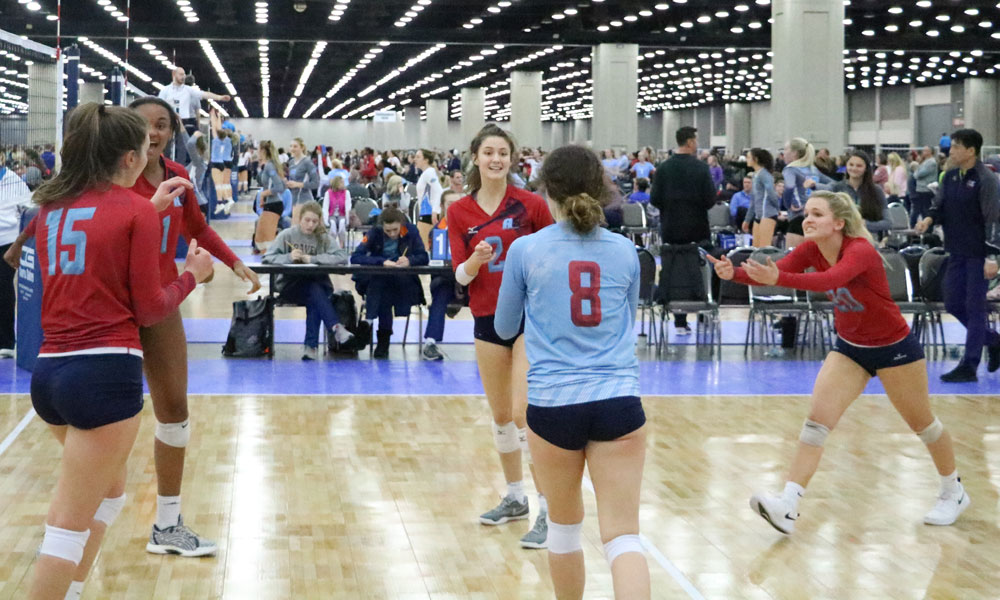 A5 18-Elite is just one of this year’s 18’s teams looking to finish on a high note for their seniors. How will this season’s senior class look to finish out their club careers?

Welcome to a fantastic Friday Club Dish. Today, it is all about the 18’s age group. For many, this will be their last ride on the club volleyball highway, so let’s take a look at what’s under the hood of some of the teams looking to cross the ultimate finish line in their club careers.

Arizona Storm Elite’s 18-Thunder qualified for nationals last year and finished third in the Red Rock Rave. Touting ten returners, coach Jami Rolfes said, “We should be a fun team to watch as long as we can stay healthy. We are a little on the small side, but I’m planning on speeding up the offense a little to take advantage of our athletic ability. I think all the returners have gotten stronger and smarter. Taylor Raiola and Bri McKnight had great high school seasons. We’ve added more depth on the pins with Kaylie Ray and Nyjha Marcelin. Kate Hatch is a phenomenal setter. She’s smart on who she sets and is also capable of attacking herself. She really makes the defense think. Jenn Soto is a workhorse in the middle, and Jaz Knight is undersized but unbelievably athletic. Both defensive players Abby Converse and Maddie Felker are coming off of great high school seasons as well. Our practice environment will be very competitive, and I’m really looking forward to seeing what this group can do.”

California’s Coast Volleyball Club has returned every player from last year’s third-place finishing team in the open division at Junior Nationals. The 18-1’s also brought in three very strong additions in libero Alex Lougeay, setter Molly Wilson, and utility hitter Sophia Callahan. Lougeay, a Stanford commit, will look to lead the offense on the first contact and allow the team to impose their will on opponents. Wilson, a Washington commit, will quarterback the offense with versatility, and Callahan will be the catalyst, adding charisma and competitiveness.

California’s Rage Westside Volleyball Club returns five to the 18-Jen roster. 6-1 RS Natalie Grover and 6- MB Lolo Fatialo will add some size and power to the offense. Add 5-2 setter Hillary Chung and 5-7 DS Ashley Chacon, and according to coach Jen Agresti, “all these additions are key pieces into my puzzle. They are great teammates talented hard workers everything you need for that chemistry element.” After finishing in the lower half of the 17 Open division last year, they’ll raise the bar this year.

This season’s SynergyForce 18 National roster will return a core group from Delta Valley 17 Blue, which finished with an honorable mention in our National Club Rankings last season. This group looks to compete at the Open Level and try to secure an open bid. This team, like years past at Delta Valley, will bring a defensive mindset and run a fast tempo offense. One thing they lack is a big presence on the pins like most at the open level have. Middle blocker Ella Jimenez (6-2), OH Emma Miller (5-11), setter Jesiree Moral (5-7), and libero Aubrey Miller will look to bolster the squad as key players.

Georgia’s A5 18-Scott will return a dozen from last year’s 17th place finished from the 17-Open division. Coach Scott Shelley said, “This team’s biggest strength will be our experience, chemistry, and depth. The development of our pin hitters and setters will help to clear some more room for big-time middles Sasha Ratliff, Mackenzie Norris, and (a newcomer to the team) Claire Parsons. In addition, I think this group will be stronger in the backcourt this season as Ava Vlkovic, Madison Morey, and Cat Cheney have continued to develop this off-season. The question mark with this group will be filling the void created by Phoebe Awoleye’s early graduation, which we will do by becoming more diverse offensively and calling upon some of our second-team players from previous years to step up to the Open level.”

Fight Club of Kansas has returned just five to the roster, but newbies 5-9 OH/DS Erica Fava, 5-9 setter Jadyn Jackson, 6-0 MB Abby Rose, and 5-5 L/DS Ryen Wilkens should do well to fill the gaps left from last season. Fava should add some polished play and an array of smart shots to score points. Jackson will allow the 18-1’s to run a 6-2, Rose will bring not only a massive amount of athleticism, but also excellent reading ability, and dynamic transition out of the middle. Rose should add some much-needed ball control, as well.

In North Carolina, Triangle 18 Black returns only two players from last season. According to coach Logan Barber, “This group was extremely successful and finished in the top 25 last season; however, over half of those players have graduated early are not playing club this season. This 18 Black team will look different than last year’s team but is hungry for the challenge and opportunity to compete at the highest level.” Key Players include uncommitted senior OH Allie Grant Avery (6-0), Coastal Carolina commit and DS/libero Taylor Thomason, 6-2 RS and Barry commit Courtney Zwikker, and 5-11 setter and University of North Carolina Wilmington commit Bella Schall.

Houston Skyline 18 Royal has returned 11 players from the group that finished fifth at Nationals in 17 Open last year. Newcomer Trinity Watts, a 6-0 OH/RS, should add ball control and depth on the pins. She should be a great counterpart to 6-2 Senior Ace and Kentucky commit Madisen Skinner and fellow Senior Ace Dylan Maberry, a 6-1 LSU commit.

Summit Volleyball’s 18 Nike Blue returns seven and added six new faces. Newbies 6-0 OH Natalie Nieman, a monumental side out threat with a heavy arm, and 6-0 MB Lena Cates, a fast attacker, should bolster the offense. The defensive dup of Katy Durkee and Parker Newton should improve both serve receive and defense and allow for the utilization of a three middle offense.

Virginia’s VA Elite 18 coach Joseph Ziegler is excited about this season’s prospects. He said in his outlook, “This was a very strong, athletic team in 2018-2019 and they only got better in the off-season with the addition of three new athletes to the roster and a whole lot of success throughout their high school seasons.” The addition of Lauren Connolly, as well as All-Region Second Team Meghan Dunnigan, should improve serve receive and defensive firepower.