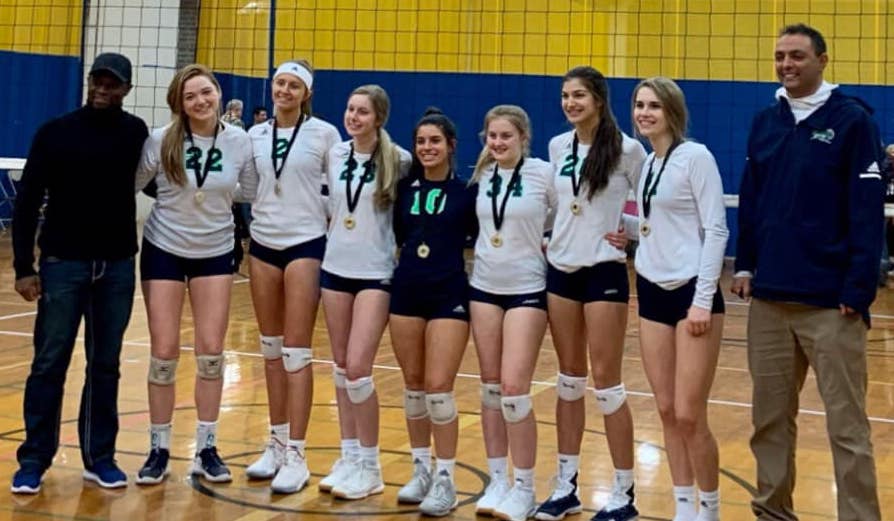 Over the weekend, Delaware United Volleyball Club rang in the new year by celebrating two first-place finishes at the New Years Revolution Tournament. West Chester University in Pennsylvania was the center of attention as Delaware United swept the competition in all three divisions of play.

Coach Ludovic Nkamji and club director Marouane Jafir led the 17 Navy team to an undefeated weekend and taking first in the 17’s and 18’s division. The two former international players came into the tournament with a dominant roster, including Katie Sonchen, Kyla Dow, and Madison Znacko, all from the state runner-up St. Mark’s squad. Ursuline Academy‘s Avery Brown also joined the club after playing for Premier Volleyball of Delaware.

17 Navy dropped four sets on the day, including one in their first match of the tournament against USANY Patience. After a massive blowout win in the first set (25-10), 17 Navy dropped set two by the most narrow of margins (23-25) before finishing off the match in the third set by a winning score of 15-12. Dynamic Volleyball Academy‘s 18N Blue team was the next to steal a set from the eventual tournament champions, Both the first and second sets came down to the wire, set one in favor of DVA 25-23, and the second in Delaware United’s favor 25-23. Set three earned 17 Navy the victory with a score of 15-11. Both the semifinal over USANY Fortitude and the final over AVA 18N-Black ended in three sets in favor of Delaware United 17 Navy.

The club’s 16 Navy team also finished on top in their respective division. Along with coach Nkamji, Coach Shayne Sullivan, a Neuman College graduate and four-year player, led the team to an undefeated weekend without dropping a set. It was not until the semifinal match against their own club’s 15 Sapphi team that they allowed more than18 points in a set. Wilmington Charter middle blocker Ava MacMurray and Emma Staib, an all-conference selection from Concord High, led the charge, defeating their younger clubmates 25-12, 26-24 to earn a place in the finals. They then defeated Dynamic Volleyball Academy’s 15N White team handily 25-11, 25-13 to finish their undefeated campaign with gold.

Normally we don’t cover the younger age groups. However, there is something to be said about one club winning gold in all three age groups. Delaware United’s 17 Navy, 16 Navy, and 13 Cobalt all won gold on the weekend. 14 Navy finished second behind 13 Cobalt, who they played in the finals. 18 Navy finished third behind 17 Navy, and 15 Cobalt and 15 Sapphi finished third and fourth respectively, after the first place 16 Navy team. It was a positive, confident start for Delaware United, and they’ll look to continue that success into the heart of the club season.