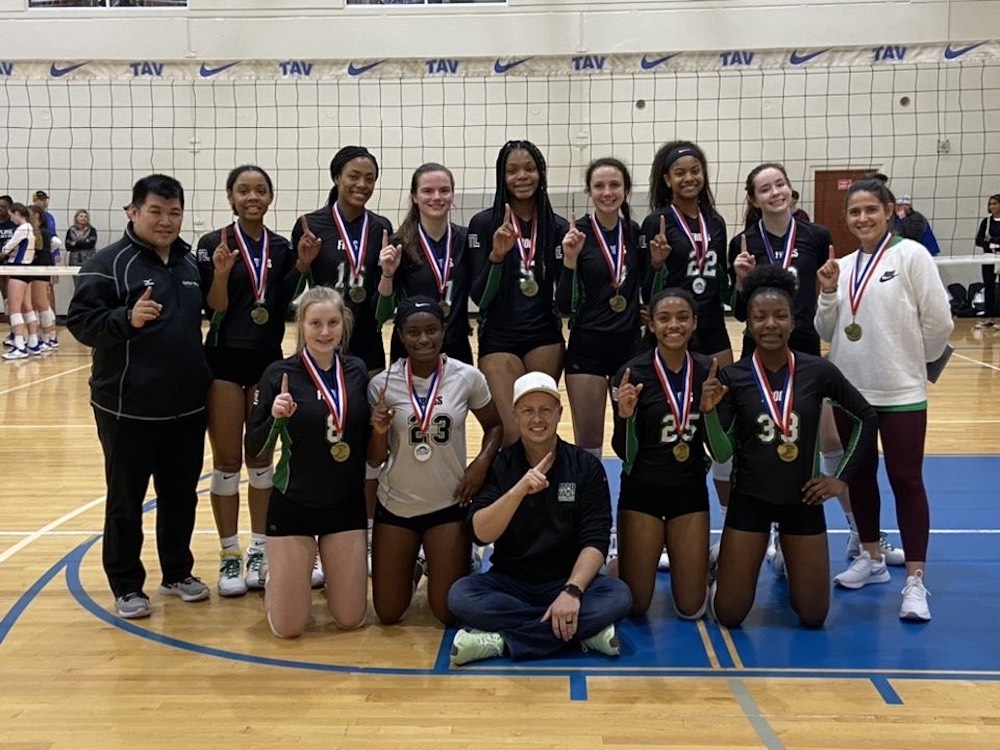 Over the weekend, the 16’s division of the North Texas Region MLK Tournament was jumping, but none jumped higher than MADFROG’s 16 National Green. Before the two-day tournament, coach Matt Sipes and his team had yet to play a match, their only scrimmage being the Thursday before the competition, but you would never guess it after their first match, defeating Victory 16 Elite Green, 25-8 and 25-15. It was in their second match of day one that they found their first real test in the form of a new club.

Muscle Volleyball has just one team, the 16 Elite. Coach Sipes described them as “a mix of Texas Pistols best players from the year before, TAV, and MADFROG 2’s.” He went on to say, “They were a tough little cookie. That team went on to beat Lonestar 16’s (finished third at nationals last year) in the first round of gold play.” Halle Sherlock, an All-district setter/RS from Timber Creek High, Makenna Miller, an all-state OH from Northwest High, and Zoe Hall, district 8-4A co-MVP and middle hitter from Bridgeport High are just a handful on this intriguing new team’s key pieces.

After finishing defeating Muscle Volleyball and finishing first in their pool, MADFROG went on to play some high-level ball on day two, but serving, as it does all teams, vexed the 16 Green squad. “Day two was just working through serving problems,” Coach Sipes lamented. “We missed a lot of serves and had a lot of hitting errors. But we were not challenged at any point until TAV.”

In the semifinal, TAV 16 Black went toe to toe with MADFROG, and MADFROG prevailed. According to Sipes, “Mia Moore,Avery Calame, Maya Duckworth, and Ana Heath were amazing. Ifenna Cos-okpalla and Kayla Davis (our middles) got a lot of blocks on them. The second set was tight, a two-point margin of victory for MADFROG 25-23. Mia and Ana had double-digit kills on the right side. TAV had no answer for them.” The all-star cast met their final and most significant challenge of the day, Skyline Juniors.

According to Sipes, “We started out hitting straight into the block and missed serves. Lost 21-25.” The 16 Royal roster includes some big guns including 6-0 OH/RS Lexi Guinn (Texas A&M), 5-10, OH Hannah Billeter, an all-district first team member with McKenney Boyd, and all-state honorable mention, and Megan Hodges, 5-8 District Setter of the Year with Celina, a TGCA All-State selection. But who stood out the most in Sipes’ eyes was 6-1 OH Emily Hellmuth of Highland Park, a former Victory Volleyball Club member, who he described as a ‘tough hitter with power.’

MADFROG took over in sets two and three. Sipes said, “It took us about half a set to figure out how to attack them and serve them. Ifenna, Ana and Mia started slowing the ball down on the right side and getting blocks. Maya Duckworth was sensational in attacking from the outside. Avery Calame got a ton of tools. Ifenna blocked Skyline about five times, and Mia with Ana on the right side finished them off.” He continued explaining, “We flipped Liberos in Set two (25-14) & three (15-8) with Zoria Heard really getting us some key digs that turned the pressure up on Skyline. Zoria really showed her athleticism after a great school year.”

Though it is early, coach Matt Sipes expects great things of his MADFROG’s 16 Green team that earned themselves a bid to the North Texas Region Bid Tournament. Reflecting on the tournament, he said, “It is a great start to the season. I expect this team to be competing for many gold balls at qualifiers and for a national title in late June. Hopefully, the hometown crowd comes out with it being in Dallas.”