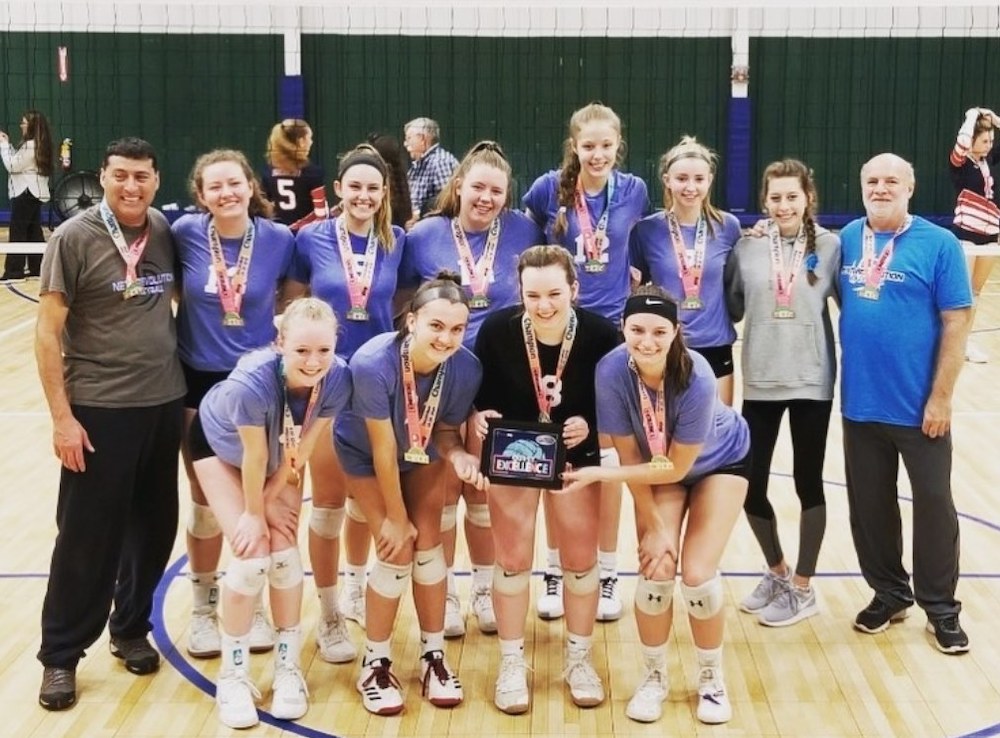 Next Revolution Volleyball (pictured) and Twin City Volleyball Academy went toe to toe at the Quest for Excellence Tournament in a fantastic bout.

Greensboro, North Carolina, was the place to be over the weekend as 25 teams in the 17’s and 18’s divisions competed for the top spots at the Quest for Excellence New Year’s Tournament. All 25 Teams competed in mixed-age pool play on Saturday, then split into their respective age divisions on Sunday, each age group crowning a champion. But it was one mixed-age matchup stood out the most, an epic battle between Twin City Volleyball Academy of North Carolina and Next Revolution Volleyball of Virginia.

Twin City Volleyball Academy 17 HKH was led by Junior Ceci Carter, Randleman High’s Player of the Year, and a North Carolina A&T commit. Alongside her were Kaylin Dowling, junior captain of the 3A state runner-up West Rowan team that went 28-1 on the season, and Meredith College commit, libero Emily Emerson, part of the West Stokes High team that finished their season as North Carolina 2A runner up.

Coaches Amber Brandon, who brought her Davies High team as far as a second-round finish of the NCHSAA 4A State Championship tournament, and assistant coach Caleb Gilley, who brought his East Surry team to the finals of North Carolina 1A State championships, were at the helm when their TCVA team faced their biggest challenge of the day, and maybe even the tournament and it wasn’t even in the finals!

Next Revolution Volleyball‘s NRV18 Ellis team came to play, and coach Pierre Ellis, who has been coaching youth volleyball for over 30 years (including 12 at NRV), brought a roster that was fierce. Kenleigh Gunter, an All-State selection and Virginia 3A state champion with Lord Botetourt led the defensive effort throughout the weekend, while Hailee Blankenship, who helped her Jefferson Forest team to the Virginia 4A State Quarter-Final, played outside hitter opposite her counterpart, 2A State Champion Radford’s Charli Dietz.

TCVA took the first set 25-18, but NRV took set two by a ten-point margin, 25-15. Set three would come down to the wire, a tight-knit match until TCVA pulled away and finished off the game 15-12. A match of this magnitude should have been the epicenter of the tournament final, but alas it was somewhat buried in the obscurity of crossover pool play.

Both teams went on to finish first in their respective age divisions, NRV brought home the gold over American Volleyball Club‘s 18’s team in two sets (25-22, 25-15), while TCVA took down Sand Rulz 17’s in two sets as well (25-22, 25-15), a strong start to the 2019-20 club season for both programs. But, what everyone should be talking about was the epic three-set showdown between these two teams. Matches like this help quell the knee bouncing and toe-tapping that comes along with waiting impatiently for the club season to really get rolling at full speed. it will be interesting to see how these two teams will fare down the road of the club volleyball highway.