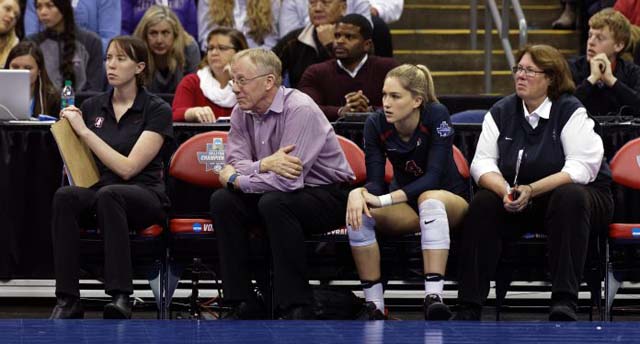 To be an effective communicator on the volleyball court, it is your job to be what your teammates need. Only then can you play beautiful volleyball 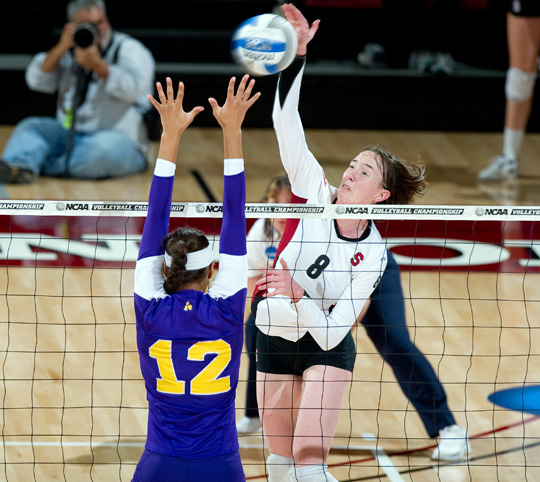 [Editor’s  note: Cassidy Lichtman was a first-year assistant coach in 2016 when she won a national championship with Stanford University, her alma mater. Lichtman, a two-time First Team All-American during her playing days, wrote thoughtful articles for PrepVolleyball.com during her high school days at Francis Parker, where she was a two-time California state champion; and after she graduated from college. This piece was written in 2013 while she was a professional playing overseas].

We were stretching at the end of practice one day, a few weeks after I had started with my new team in Poland, and my coach came over to tell me that he thought my middle and I communicated very well.  My middle speaks maybe five words of English.  I laughed.  But he was also right. We do communicate well.  Words are really only a small fraction of what makes up effective communication.  What is said is framed by how it is said and how it is received.  And all of those factors define the interactions and the relationships that you will have with your teammates or coaches.  I think that it is easy to look out onto a court and spot a team that communicates really well.  It doesn’t have to be the loudest team in the gym or the one with the most girls and parents yelling “TALK!” from the sidelines.  You can tell the teams that communicate effectively because they work seamlessly with each other.  I want to delve deeper into what makes communication work within a team.

As I have said before, how you say something is just as important as what you say.  For example, let’s say you miss a dig and your teammate says, “You can get that.”  Now, if her tone is condescending and annoyed you’re probably going to react to it differently than if she uses an encouraging tone.  Tone is something that we all have control over and yet it constantly falls victim to our emotions in the moment.  If you’re a competitive person then losing is probably very frustrating for you.  Therefore it is difficult not to sound frustrated with your teammates when you are behind.  But that frustrated, whiny tone that often comes out doesn’t end up helping anyone, except probably the other team.  So if you really consider yourself a competitive person then you should care enough to figure out how to communicate in a way that will actually help your team win.

There is no correct tone to use when communicating with teammates or coaches.  Part of learning how to communicate effectively is understanding the different personalities on your team and what they will each respond to best.  Some people need to be coddled more, some need you to get in their face a little bit and some need you to crack a joke and make them smile.  It is your job as their teammate to be what they need.  Two hints for you though: everyone deserves respect and nobody ever needs condescension.  Never talk down to your teammates.  Each one of us, from middle school to the national team, is still learning.  As long as you are on that court together, you are a teammate not a coach.  As soon as you adopt a tone that implies that you somehow know more than they do it’s going to make your teammate feel bad and make them pretty bitter towards you.  Not to mention you’re probably going to screw up on the next point.  That’s just how the volleyball gods seem to operate.  So instead of contributing to the breakdown, learn what it is that your teammates need from you to build them up.

Much of our communication comes not from our mouths but from our body language.  My current team converses mainly in Polish.  Consequently, I miss ninety percent of what is being said.  After any given practice, though, I can tell you which of my teammates is having a bad day, who had fun and who is frustrated with the coach.  How you walk around the court or the expressions you show on your face can tell your teammates exactly how you feel.  Poor body language is one of the quickest ways to suck the energy out of a team.  I said it was easy to spot a team that communicates effectively.  One of the reasons is that as soon as you see someone rolling her eyes or avoiding slapping hands or generally moping around the court you can just cross that team off the list.  Body language, like tone, is easily controlled as long as you remain conscious of it.

Talking is obviously crucial to communication but talking is completely irrelevant in and of itself.  It is only communication if someone is listening.  This is why I said that the best communicators are not necessarily the ones on the loudest team.  If everyone is talking but nobody is listening then there is no actual information being passed between people.  The teams that have people talking and listening at all times are the ones that work well together.  In a game, communication needs to be quick and to the point.  There is little time for debate or explanation.  The point of listening, then, is simply to understand what your teammate is saying and let them know that you understand so that you’re both on the same page.  When you’re off the court, listening gets a bit more complicated.

Communication on the court is important because it helps you figure out the game plan and execute it.  Communication off the court is important because it defines how your team interacts.  Listening to your teammates, coaches or players off the court is more complicated because there is time to actually discuss what is being said.  It is easy to hear something without really listening.  Listening requires you to actually absorb what you’ve heard and think about it, preferably with an open mind.  Differing opinions can be one of the best things for a team because they can make you think about what your own opinion is and why you think that way.  That only works, though, if you approach discussions with an open mind and try to see the subject from the other person’s perspective.  In most matters concerning teams there is no right or wrong answer.  If somebody has a different opinion than I do, my first thought cannot be to find where she went wrong, but rather to figure out what it is about her perspective that differs from mine and how it led her to that opinion.  I don’t have to necessarily like her opinion to agree that it has its merits.

When people ignore the possibility of there being another perspective they often make assumptions instead.  This is the cardinal rule of communication: don’t make assumptions.  First, making an assumption is a great way to avoid communication completely and second, you’re probably wrong anyway.  Wrong assumptions can kill teams.  But they are so easily avoided if you just talk to each other.  If you don’t agree with what someone else does, don’t assume you know her reasoning.  Ask her.

Maybe you aren’t comfortable asking for her reasoning.  If that’s the case then you need to examine your relationships with the people on your team.  Truly effective communication can only exist if you can develop a solid relationship built on trust.  You have to be honest and sincere with each other.  That doesn’t mean sharing all of your life’s secrets or saying anything that’s on your mind.  It means telling people what they need to know even if it’s not necessarily what they want to hear.  And it means listening to what you don’t want to hear because you need to know.  It means discussing instead of arguing because you can accept that they have something valuable to say.  It means understanding that you all have one goal and that the best way to get there is to do it together.

If you’re talking to a teammate then the only way this kind of relationship works is if you both know that whatever happens, when you step onto the court you have each other’s backs.  If you’re talking to a coach then it only works if you have absolute respect for his or her authority.  No matter what is discussed, the coach has the final say.  If you’re a coach talking to a player then it’s best if you understand that you’re still learning too, and that sometimes explaining your reasoning helps you and your players be better.  Real trust takes a while to build and is incredibly easy to break.  But if you can build those relationships on your team then communication comes naturally.

That’s what I think you’re really seeing out on the court when teams are able to communicate effectively and play seamlessly together.  You’re seeing the trust.  Trust that everyone knows their role, trust that they know how to play around each other, trust that someone’s listening when you need to make an adjustment in the moment.  What’s funny is that you don’t hear it in the words being used.  You hear it in the tone of voice, you see it in the body language, the expressions, the eye contact and how the team flows together.  Half of the time when I’m with the teammates and coaches whom I communicate best with, words in general become unnecessary.  We’ve built the relationship up to the point that we just know how the other thinks.  And that current of trust is constantly running through every interaction.  Getting to that point where, at the most crucial time in a match, you can just look someone in the eye and know everything you need to know is worth every minute it takes to build that relationship.  And I think that the teams that foster those kinds of relationships are the ones that end up playing beautiful volleyball.