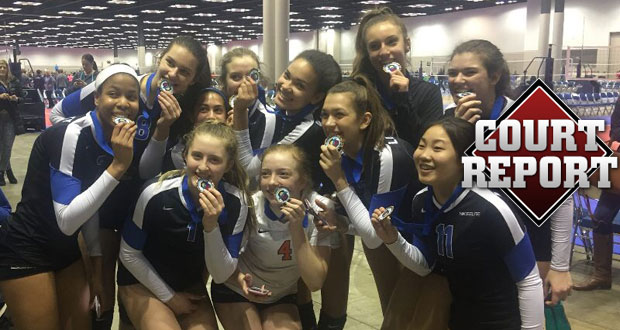 Court Report takes you inside the Central Zone Invitational, plus we continue checking in on the power leagues happening around the country.

Legacy 15 Elite got revenge in winning the 15 Open gold at Central Zone.

No doubt the Central Zone Invitational out of Indianapolis takes center stage in this week’s Court Report.

Top teams in all age groups made the trek to Indy. For Elevation out of Ohio, it turned out to be a terrific weekend, while some of the usual suspects took home golds elsewhere in Open.

Looking at other parts of the country, the North Texas Region continued its rankings tournament while the Mid-Atlantic and Great Lakes power leagues are picking up, plus much more in this week’s edition.

As a 15 group in 2016, Elevation earned its Open bid by winning the Big South Qualifier, ultimately finishing the year in 11th place in 15 Open at Junior Nationals.

With a core group of eight players returning, Elevation 16 Balice looked to pick things up where it left off and the Central Zone Invitational was a great early-season proving grounds.