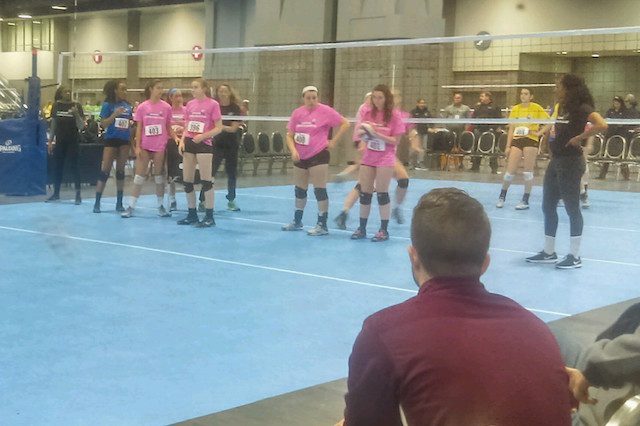 More than 450 uncommitted players attended the inaugural PrepVolleyball.com Unsigned Showcase in D.C., and we have a list of players who stood above the rest.

WASHINGTON, D.C. — When the first session of the inaugural PrepVolleyball.com Washington DC Unsigned Showcase ended Friday night, Nikiya Mitchell was one of the last players to leave the arena.

It wasn’t because she was slow to change. Instead, it had everything to do with the reason she attended the event in the first place — to get noticed.

The senior from Lackey (Indian Head, Maryland) had a fist-full of handouts from college coaches and a line of coaches waiting to talk to her.

“I came here because the D1 and D2 coaches could see me on the spot, in a small group,” said Mitchell, who was named MVP of the event. “I’m glad I came,” she added with a smile, glancing at the brochures from several college coaches who approached her after the event.

Friday marked the first time a PrepVolleyball.com Unsigned Players Showcase was held in D.C., and with more than 450 in attendance, it was a great success, according to Jason Uller, the lead coach of the event who is an assistant coach with Metro 17 Travel. “This is an amazing turnout for a first-year event,” he said. “I’ve been involved in several recruiting showcases and I’ve never seen so many kids at a first-year event. … I’ve heard a lot of positive comments from college coaches and that could increase the number of players and coaches (in the future).”

While the players were displaying their skills for college recruiters, parents were invited to a recruiting seminar with a keynote from Maryland coach Steve Aird.

Athletes from three countries — U.S., Canada and Puerto Rico — attended the Unsigned Showcase, which was held the night before the start of the 900-team Capitol Hill Volleyball Classic.

While the Unsigned Showcase featured mostly underclass players, it was one last chance for high school teammates and seniors Dasia Smith and Ruby Tamunokuro to get noticed.

“I didn’t get the [interest] I was looking for [during the high school season], so I wanted to come here,” said Tamunokuro, who attends Milford Mill Academy (Baltimore, Maryland). “I came in shy and I had to make myself known.”

Smith added, “I learned I get shy and nervous, so I just had to try to have fun and be myself.”

Both said they were please with their performance.

In an event of 450 players, all seeking to grab the attention of college scouts, there were quite a few that stood out above the rest.

The following is a list of players that caught the attention of the coaches running the drills:

Nikiya Mitchell, MB, CEVA 18s Black (Bryans Road, Maryland) — Coaches from four courts watched Mitchell and without hesitation said she stood out from the rest. Very high energy, very explosive to go along with being a very good teammate, encouraging others in her group.

Kiera Parker, Libero, YMCA Lady Elite (Middletown, New York) — She moved really well and was one of the better players in her group.

Marlee Dzergoski, RS, Baltimore Elite 17U Navy (Manchester, Maryland) — Another tall player who was capable of pounding the ball.

Rebecca Frye, S, Virginia Juniors (Washington, D.C.) — Could do a lot with the ball. A very strong performer in the group.

Alyx Steitz, MB, Shenandoah Valley Juniors/Vipers 17-1 (Staunton, Virginia) — An all-round solid player with great footwork. She had a good rhythm to her approach.

Nicolette Marino, Libero, SOSVBC 16-1 (Verona, New Jersey) — She was everywhere on the court.

Claudia Rivera, OH, Borinquen Coqui (Guaynabo, Puerto Rico) — Jumped well with a lot of power. She was one of the top underclassmen at the event.

Victoria Barrett, OH, FJVC 15 National (Stafford, Virginia) — One coach stated: “She can jump through the roof.” Also, she showed the ability to dig the ball, as well.