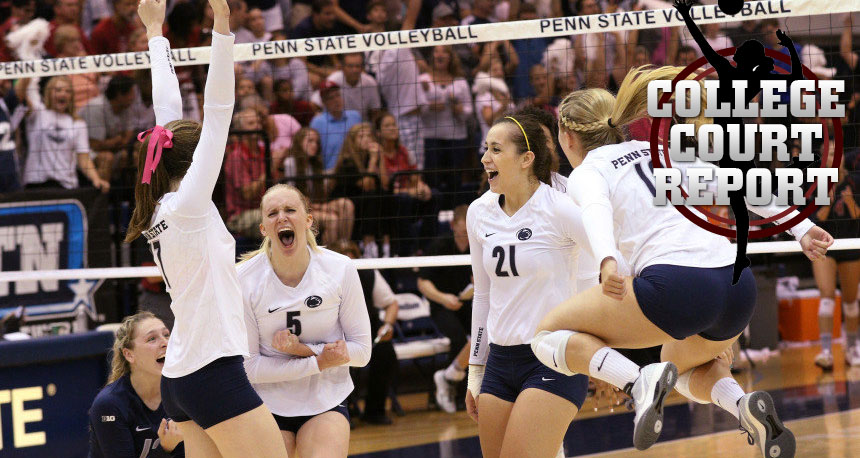 It’s going to be an abridged edition of College Court Report this week. Here’s looking in on some happenings from last week.

It was a good weekend for Minnesota, which pulled back to .500 at 2-2 after holding off Louisville in five games and sweeping North Carolina. With Daly Santana busting out for a career-high 39 kills, Minnesota topped the Cardinals, 23-25, 25-14, 25-20, 26-28, 15-13. It wasn’t so much last week’s loss to Stanford, but the Gophers falling to Texas A&M is what made this weekend one to watch for Minnesota. By going 2-0, it might be a sign the Gophers are figuring some things out after the first weekend.

Ohio State looks to be on track after downing Florida State twice over the weekend, first in five games and then in four. Outside Elizabeth Campbell and Taylor Sandbothe were the main reasons for the Seminoles demise. The combined for 31 kills in the four-set victory and 37 kills in the five-set one, when Campbell put away 20 balls. After losing to Wyoming to start the season, the Buckeyes earned plenty of redemption. Beating a team like Florida State back-to-back isn’t easy, so that should getting Ohio State moving in the right direction.

Wisconsin also rebounded from an opening-weekend loss to Western Kentucky and defeated both Louisville and North Carolina as well. Kelli Bates led the Badgers in kills in both victories.

BYU picked up a nice sweep over Purdue behind 14 kills from Alexa Gray.

Kentucky had a rough week, first following to Ohio. Then the Wildcats were beat by Creighton in three sets. Losing to USC is a quality loss, but one week after feeling good about beating Michigan State, Kentucky needs to regroup and get back at it.

Miami had a solid opening weekend, but hit a wall this past one. The Hurricanes went 0-3 with losses to Marquette, Oral Roberts and Missouri State.

What to make of UCLA going on the road and defeating Hawaii in four games? Hawaii had a good opening weekend and the Bruins did not. So is UCLA much better than the team that lost to LMU last weekend or are the Rainbow Wahine not as good as advertised this season? It’s something follow and see how it develops.

There are plenty of teams we are still waiting to find out more and we won’t until they face some stiffer competition. Washington and Arizona are two Pac-12 squads that fit that description. Michigan is in the same boat out of the Big Ten, while Kansas is a Big 12 team sitting at 6-0 but the Jayhawks haven’t played the toughest of schedules to date.

I’m not ready to hand Penn State the national championship just yet. While there’s no question the Nittany Lions made a statement with the sweep of Stanford, I think it stopped short of a national title declaration.

This much is for sure though, the list of teams that can contend with Penn State is a short one. But it’s volleyball and Penn State can have a bad passing or serving match like anyone else and can be beat. That’s why though I think Penn State established itself as the clear frontrunner, it hasn’t pulled so far ahead that it can’t be caught.

After that, I’m going crazy with everything else.

The list of national championship contenders might be a short one, but anything else can happen beyond that and making sense of the first two weeks can be tough.

There’s just not much separating teams and the difference between being a Top 20 team and a Top 75 team isn’t much. The results have shown as much. Marquette was looking good last weekend but was upset by Missouri State this past weekend.

Western Kentucky slipped up against Dayton after defeating Wisconsin to start the year. Iowa State lost to Virginia in five games, and at the same time, Virginia Tech is 6-0.

Pepperdine started off 4-0 but went down to Lipscomb, which lost to Florida Atlantic. North Texas downed Oklahoma in five games.

From that end, it makes things wildly unpredictable.