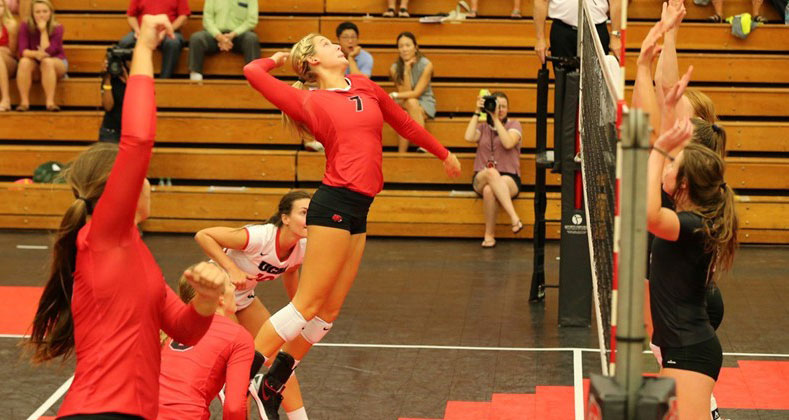 With Division 1 well underway and facing a loaded weekend, Divisions 2 and 3 ramp up with the start of the 2015 schedule.

A few teams have played already, but the large majority gets going Friday.

While a match like Penn State and Stanford will get a lot of the attention, our Nos. 1 and 2 teams are also squaring off in Division 3.

In Division 2, there are four matches featuring Top-10 teams. There’s one more Top-10 showdown in Division 3.

Below, we highlight the best matches of the weekend:

No. 9 Palm Beach Atlantic at No. 1 Concordia-St. Paul – One of four Top-10 encounters to kick off opening weekend, both sides will have the opportunity to earn early bragging rights. They each have lots of returning players and high expectations for the 2015 season. For Concordia, it features last season’s kill leader in Anna Schlaak, while last year’s block leader Sarah Ragland is back for Palm Beach.

No. 4 Minnesota-Duluth v No. 8 Wheeling Jesuit – Another Top-10 meeting of the day, this result will also help set the early pecking order in the fresh season. Working in Minnesota-Duluth’s favor is the return of the offensive duo in setter Ashley Hinsch and outside Mariah Scharf. Wheeling Jesuit counters with standout middle Haley Kindall, who led the team in kills and blocks a season ago.

No. 7 Nebraska-Kearney at No. 25 Alaska-Anchorage – Senior setter Erin Seele and senior outside Kelle Carver look to pace Nebraska-Kearney past the host Seawolves. They are turning to outside Katelynn Zanders, opposite Julia Mackey and setter Morgan Hooe to anchor the attack.

No. 19 Northwest Nazarene at No. 10 Colorado Mines – Taylor Roberts returns to hold down the Northwest Nazarene defense and looks to help the Crusaders to the early upset. It’s going to be a difficult task, as the Orediggers bring back a strong contingency from a season ago, including kill leader and opposite Alanna Winfield.

No. 18 Sonoma State at No. 12 BYU-Hawaii – The trio of Caylie Seitz, Kelsey Hull and Madelyn Densberger will need strong outings if Sonoma State is to deliver the upset on the road. BYU returns lots from 2014, including star setter Michelle Chen.

No. 24 Truman State at No. 15 Central Missouri – Central Missouri has key pieces back in setter Kourtney Thompson, libero Annie Reilly and outside Carly Sojka. That gives the Mules hope for a strong year and will make them tough to take down in this contest. Truman State does have last year’s kill leader back in Kayla Bastian to help carry the offensive load.

No. 16 Cal State San Bernardino v No. 19 Northwest Nazarene – The Crusaders continue a difficult start to the schedule with this meeting. San Bernardino has last year’s kill leader Aly Torline and setter Ciara Parker to work with.

Western Washington at No. 3 Tampa

Rockhurst at No. 25 Alaska-Anchorage

No. 2 Southwest Minnesota State v No. 21 Arkansas-Fort Smith – The Top-25 duels keep coming as the Mustangs will face their toughest test of the weekend. It’s exciting times as the Mustangs bring back kill leader Kenzie Beekman, block leader Sarah Parker and dig leader Whitney Burmeister. For the Lady Lions, who are building around setter Bailey Katzfey and libero Emily Tripp, it’s the perfect chance to start the season in style by pulling the upset.

No. 4 Minnesota-Duluth at No. 3 Tampa – One of the powerhouse showdowns of the weekend, it’s not likely to disappoint. We already mentioned all the returning talent Minnesota-Duluth brings back. The defending national champion Spartans bring back last season’s Player of the Year in senior outside Berkley Whaley.

No. 8 Wheeling Jesuit at No. 3 Tampa – A huge day only gets bigger for Tampa with another Top-10 fight against the Cardinals and setter Andrea Thobe.

No. 16 Cal State San Bernardino at No. 10 Colorado Mines – Depending on the circumstances, the winner of this contest could be looking at very good opening weekend. Either way, the winner is assured of a quality victory and could be moving up the rankings.

No. 23 Metro State at No. 17 Ferris State – The last of the Top-25 bashes of the weekend, they could be playing to stay in the rankings depending on how everything goes. Ferris State brings back last season’s kill leader in Megan Vander Meer and setter Stephanie Sikorski to help spark the attack. Metro State brings back its own combo in setter Brandi Torr and outside Kylie Haun, who led the team in kills last season.

No. 2 Emory at No. 1 Calvin – The top teams in our preseason rankings are set to face off. That should make for good times and an entertaining start to the season. Emory is helped along by senior setter Sydney Miles and the large role she plays. Back for the Knights is National Player of the Year and senior outside Maggie Kamp. This is the first meeting of the season between the teams but it might not be the last.

No. 23 St. Thomas at No. 4 Wittenberg – Wittenberg has plenty of pieces back and is poised for another strong season in 2015. One of the main attractions is opposite Kara Seidenstricker. St. Thomas graduated two key players from a season ago and could have a tough time in this one, considering the experience the Tigers are returning.

No. 19 Augsburg v No. 25 Coe – Brianna Smith and Ali Arns had strong performances in the season opener for Coe, but the Kohawks will need an even better showing to take down Augsburg. One part of the Auggies offense is opposite Ashley Peper.

No. 22 Pacific Lutheran at No. 1 Calvin – The Lutes can see how their new-looking lineup works against the best. Setter Alyssa Workman is back for the Lutes, while Kylai Cooley makes the move from outside to libero.

No. 9 Juanita at No. 4 Wittenberg – One of the two Top-10 matches this weekend, Juanita has a trio it’ll turn to in Nakita Gearhart, Kelly Reynolds and Mar-Jana Phillips.

No. 6 Hope at No. 20 Chicago – Senior setter Lauren Hazekamp and junior middle Courtney Van Houzen are out to keep Hope among the best teams in the country and they draw a solid test having to go to Chicago for the opening weekend. Among those back for Chicago is outside Maren Loe, who set a school record for kills a year ago.

No. 11 Carthage at No. 8 Claremont MS – The senior trio of Karen Chin, Emily Heuermann and Bria Hailey are among six of seven returning starters for Carthage. It could be a big season for the Lady Reds, but they drew a tough opponent here. CMS returns a nice amount from last season, including sophomore opposite Margaux Arntson and senior setter Tanner Hoke.

No. 9 Juanita v No. 23 St. Thomas – The teams both scheduled tough opening weekends and this is another example of why. We’ll see how it goes. It could be a great weekend for one and a rough one for the other after this result.

No. 10 Cal Lutheran v No. 11 Carthage – We talked about the players Carthage is returning, but Cal Lutheran has lots back as well and it should make for a great slugfest between the pair. Outsides Allie Eason and Michelle Lawrence plus libero Nicki Tetherow are all back for the Regals.