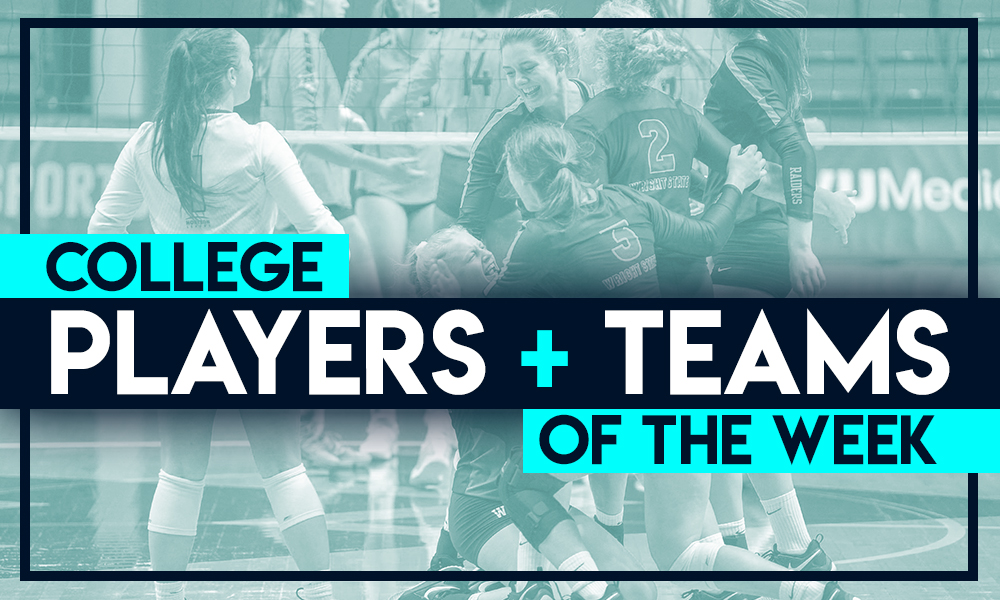 The results are in and we have seven players and four teams to recognize this week for national honors.

Payton Caffrey, OH, Florida State – Caffrey was named ACC Player of the Week after sparking the Seminoles to two crucial road wins. The transfer from West Virginia had 24 kills, hit .367 and added eight digs and an ace in FSU’s four-set win over Notre Dame on Friday, then came back two days later against nationally-ranked Louisville with 28 kills (.446 hitting), seven digs and three blocks in the four-set win over the Cardinals.

Cortney VanLiew, OH, Florida Gulf Coast – VanLiew helped the Eagles overcome ASUN rivals Lipscomb and Kennesaw State on the road to take command of the conference race. The sophomore from Indiana had 18 kills (.350 hitting), seven digs and a block in Friday’s sweep of Lipscomb. On Sunday, with first place in the conference on the line, VanLiew notched another 18 terminations and added five digs and two blocks in a four-set win over Kennesaw State. For good measure, although it came this week, VanLiew had 19 kills and 10 digs last night as FGCU stretched its winning streak to 12 in a row and captured at least a share of the ASUN regular-season title. VanLiew also is the sixth player in school history with 700 or more career kills.


Player of the Week, Non-Division I

Genesis Sheridan, MB, Iowa Western Community College – “[Sheridan] single-handedly led our team to a District J championship,” said coach Alicia Williams. Sheridan had six kills on eight swings against Lakeland in the first round of the regional tournament then posted 22 kills on 30 swings with just one error in the regional final, while adding three blocks. In eight sets, she took 38 swings and hit an astounding .710! 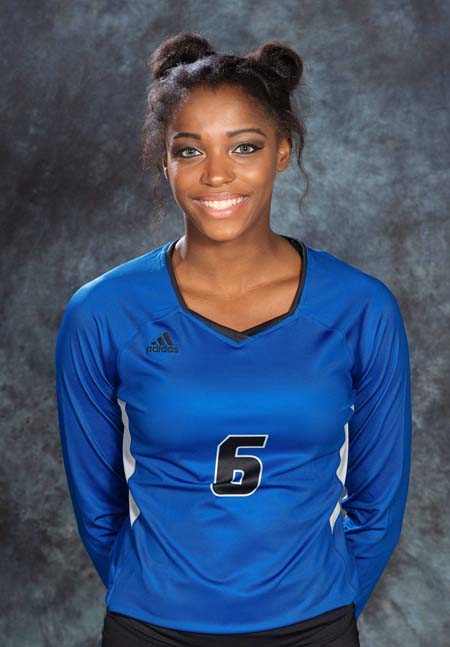 Claire Hoffman, OH, Washington – Hoffman saw the court for the first time in her career on Oct. 19. Two weeks later, she was named Pac-12 Offensive Player of the Week after sparking the Huskies to their first 2-0 week in the conference since the opening week of play. Against Arizona State on Friday, Hoffman contributed nine kills, seven digs and three aces in the four-set win. She was at her best against nationally-ranked Arizona two days later, delivering a match-high 21 kills on only 41 swings (.463 hitting) while adding eight digs, two blocks and an ace. The 21 kills were the most by a Washington freshman since 2011, when Krista Vansant, the 2010 Gatorade National HS Player of the Year, had 21 kills of her own as a first-year collegian.


Freshman of the Week, Non-Power 5

Anilee Sher, S, Rider – The native of Poughkeepsie, New York recorded a pair of impressive double-doubles as Rider went 2-0 at home this past week. Sher recorded 38 assists and 17 digs in a four-set win on Saturday over Manhattan, then turned things up a notch the next day against conference-leading Iona, contributing 51 assists, 18 digs, four blocks and three aces in the five-set win. Sher has amassed 16 double-doubles on the season.

Rachel Verdun, S, Parkland College – Recently named Region 24 Player of the Year, Verdun averaged 11.25 assists per set in six straight set wins over the final week of the regular season and regionals. She currently sits second nationally in the NJCAA Division 2 in both total assists (1,504) and assists per set (11.31).

Erica Cappellino, OH/DS, UMass Lowell – A senior, Cappellino has been a part-time player in each of her four years with the River Hawks, but her value to the team is unmatched, never more so than the past week. Head coach Resa Provanzano explains: “Erica is a senior and from Day 1 has been one of the hardest-working and motivated athletes that I have ever had the pleasure of coaching. Under normal circumstances I would nominate her for Unsung Hero every week, but last week was especially difficult for Erica and she continued to inspire us all throughout it. Erica lost her mom, Mary Cappellino, suddenly and unexpectedly on October 20th to heart complications. Mary was an amazing woman and much loved by our team and within the volleyball community. Erica went home to be with her family and attend the memorial the week after her mom passed. We weren’t sure if Erica would come back this season, but not only did she come back and join us on the court, she went into our match vs UMBC on Friday night (11/2) for the first time in the first set with the score tied 9-9 and served an ace and one more point before the side-out. This gave our team a huge boost and the motivation and momentum to win the 5th set 15-13. It was an amazing moment and one many of us will remember forever. Erica also played on Sunday in her final home game as a River Hawk and we battled hard against Binghamton but ultimately lost in 5 sets 15-12. It was an emotional day for her as her mother was not in the stands, but we all could tell that her spirit lives on with Erica.” 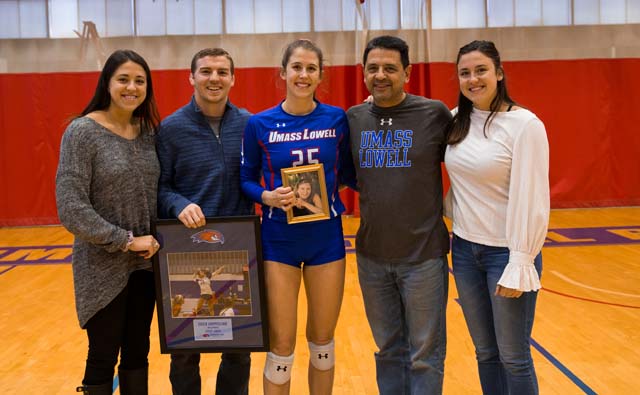 Cappellino with her family (including her mom) on Senior Night. Photo by Rich Gagnon

University of Idaho – Led by senior OH Sarah Sharp the Vandals extended their unbeaten streak to 10 with road wins at Portland State and Sacramento State to stay a half-game up on Northern Arizona for the lead in the Big Sky Conference. The victory over Sacramento State marked the first time the Hornets have lost a conference home match since November of 2014.

Marymount University – The Saints achieved two firsts this week. On Saturday, they won the Atlantic East Conference tournament title, defeating Cabrini University in four sets, the same Cabrini team they lost to in four on Oct. 20. Following the title, Marymount, which was the second seed, received its first-ever bid to the NCAA Division III tournament. Marymount (26-4) will open the tournament on Friday versus Mary Washington, a team it defeated in four sets earlier in the season.


Upset of the Week, Division I

IUPUI over Cleveland State in five on Wednesday.

There were plenty of upsets to choose from this week, with George Mason snapping A10 leader VCU’s long conference winning streak, Indiana shocking Michigan in the Big Ten, Arkansas State overcoming Texas State and Pacific taking down both LMU and Pepperdine to name a few. But we’re going back to the wacky Horizon League, where IUPUI knocked off league leader Cleveland State.

IUPUI came into the Wednesday home match with an overall record of 5-21 and just two wins in league play. The Jaguars then fell behind two sets to one versus Cleveland State, which had a 16-8 overall mark at the time and was eighth games ahead of IUPUI in the Horizon League standings with a league-leading 10-2 mark.

But behind the play of freshman Hannah Oehlberg, who had a career-high 21 kills; and Rhiannon Schuenemann, who had 29 of her team’s season-high 98 digs, IUPUI rallied to win the fourth and fifth sets to complete the stunner.

UT Permian Basin over Tarleton State in five on Saturday.

The Falcons, under .500 on the year, defeated the No. 10 team in the country in Division II, snapping the TexAnns’ 24-match winning streak. TSU was 19-0 in conference and had swept UT Permian Basin earlier in the season but the Falcons defended their home court on Senior Night with their first win over a Top 10 team in program history. UTPB won the decisive fifth set with 10 kills, zero errors and a .435 hitting percentage. Said head coach Timothy Loesch: “Our team motto all year has been ‘Believe’ and that’s exactly what our players did. They believed in the game plan, the coaches, their teammates, and themselves. I could not be more proud of the effort and fighting spirit they have shown this year.” 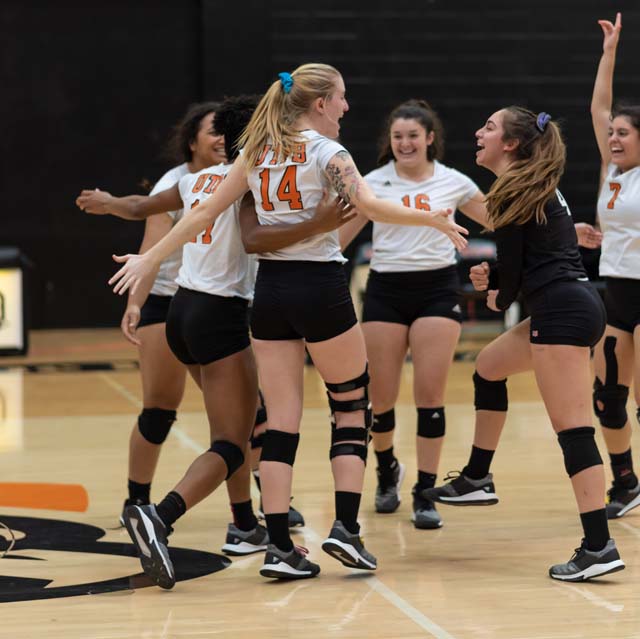