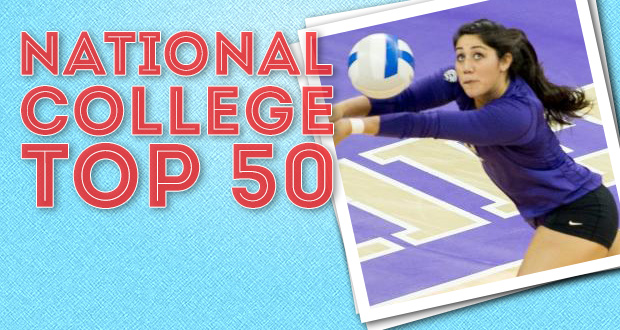 We start off our inaugural Preseason Top 50 Countdown by looking back at last year’s AVCA’s preseason rankings.

The one thing the coaches’ poll nailed was Penn State at No. 1, as the Nittany Lions went onto capture their second consecutive national championship.

However, nine teams that ended the year inside the Top 25 didn’t make the cut in the initial rankings. Ohio State was the highest finisher of the bunch, coming in at No. 13 after starting the year outside the Top 25.

USC, which started off at No. 5, finished outside of the Top 25. Purdue was in the same position, beginning at No. 8 and ending outside.

Minnesota was listed at No. 12 in the preseason and missed the tournament.

Along with Penn State, there were some more good calls. Stanford started off No. 3, Wisconsin No. 6 and Nebraska No. 7. Texas wasn’t far off, starting at No. 2 and ending at No. 5.

The point of this all is for the most part there’s not much issue in identifying the top teams. Other than a couple of misses, the preseason Top 10 last year was pretty spot on.

After identifying the top teams though, it becomes convoluted the further you get away from them and move down the rankings.

Arkansas Little-Rock wasn’t ranked all season before coming in at No. 24 in the final Top 25 last year. Oregon State was also out of the Top 25 all season until finishing at No. 20.

Teams will improve throughout the season and it can be difficult to label the ones that are going to make the biggest jump.

It’s likely our Preseason Top 50 will have many of the same aspects looking back at it a year from now.

We begin this year’s countdown by listing the teams that just missed making the Top 50.

*In asking for feedback, many coaches see their teams as Top-50 caliber this season. Since only 50 teams can go in the Top 50, some are going to have to work their way in as the season progresses.

The Bisons say goodbye to last season’s kill leader Lauren Ford but return senior opposite Brittany Estes and 6-1 senior middle Molly Spitznagle. They finished second and third in kills respectively a year ago, while Spitznagle was the team’s block leader. Also back is setter Kayla Ostrom.

With a solid returning core featuring four seniors and two juniors, Tulsa is looking to have a better showing in 2015. Among those back is 6-1 junior outside Erica Bohannon, the team’s kill leader a season ago. Also back are starting senior middles Ashley Hooper and Nicole Newton.

The Broncos return quite a bit from last season’s team, including kill leaders and outside hitters Nikki Hess (Jr) and Sabrina Clayton (Jr). Also back is sophomore setter Kirsten Mead and senior libero Danielle Rottman.

This fall is set up to be better than last year’s as Louisville returns a nice portion of its roster. Back are the top three kill leaders from last season in junior outside Maya McClendon, redshirt junior outside /middle Janelle Jenkins and 6-3 middle/opposite Tess Clark. Joining them is senior setter Katie George, who was PrepVolleyball.com’s 2012 National Player of the Year.

The best thing going for the Redbirds is the return of the top two kill leaders from last season in 6-0 senior outside Ashley Rosch and 6-2 sophomore middle Jaelyn Keene. However, the team loses the next top four kill leaders from a year ago, including setter Kaitlyn Early.

The Aggies could be poised to make a move in 2015. Basically, the entire lot is back. It includes kill leader and 6-2 senior middle Shelby Sullivan and 6-1 sophomore setter Stephanie Aiple.

The biggest item Kansas State loses from the starting lineup is last season’s block leader in Natali Jones. After that, there’s plenty of returning parts. Kill leader and 6-4 sophomore outside Kylee Zumach is back, as is outside Brooke Sassin and middle Katie Reininger. The pair finished second and third in kills behind Zumach. Redshirt junior setter Katie Brand and dig leader Kersten Kober also are back.

What stands in front of Creighton is replacing its top two kill leaders from last season, but a solid nucleus is back to help meet the challenge. It includes 6-2 senior setter Maggie Baumert and senior Kate Elman, the team’s dig leader last season. Also, Creighton boasts a incoming class, which was ranked No. 11 by PrepVolleyball.com.

With just two returning starters in sophomore outside/opposite Adora Anae and sophomore outside/middle Carly Trueman, Utah takes on a new look for 2015. It might mean a slow start before the Utes found their groove later in the season.

Kansas must find a way to replace the production of its top two kill leaders from a year ago, but senior outside Tiana Dockery will likely be a part of the solution. Also back is sophomore setter Ainise Havili and junior middle Tayler Soucie, who led the Big 12 with 1.40 blocks/set last season.

The Knights bring back nearly 800 combined kills between outsides Jale Hervey and Kia Bright. That’s a lot of firepower and they are joined by setter Dana Faught, so there is going to be familiarity there. The team also adds redshirt freshman Maddie Haggerty, who was listed at No. 18 in PrepVolleyball.com’s Class of 2014 Senior Aces.

With last season’s kill leader gone, it could be senior outside Sonja Milanovic that shoulders a bigger load this fall. She was second in kills and digs a year ago and will team with returning junior setter Megan Mathis to help keep the Trojans moving forward as a program, one that finished 24th in the final Top 25 last season.

Returning for Michigan is 6-5 junior middle blocker Abby Cole, who led the team in kills last season and was named PrepVolleyball.com’s Class of 2013 No. 3 Senior Ace. Also back is sophomore Caroline Knop, who was second on the team in kills last season but figures to transition to the back row this season. Arriving is 6-1 freshman outside Carly Skjodt, PrepVolleyball.com’s 2014 National (Senior) Player of the Year.

One of the keys for LSU this season is moving on from the transfer of block and kill leader Briana Holman and forming a new identity. Part of the plan should include 6-2 senior outside Cati Leak, who was second in kills last season. Three more of the team’s top kill leaders from last season return, but LSU lost setter Malorie Pardo.

Miami brings back pieces in 6-0 sophomore setter Haley Templeton and senior outside Taylor Scott, as well as redshirt junior outside Kelsie Groot, last season’s dig leader. But they must replace the loss of Savanah Leaf, who had almost twice as many kills as the next closest person last season.

The 2015 season could be one of improvement for Alabama, which returns a ton from last year. Leading the way is senior setter Sierra Wilson. She has last season’s redshirt junior and kill leader Kyrstal Rivers back at opposite, as well as 6-3 sophomore outside Kat Huston, who was second in kills. Also back is block leader and 6-3 sophomore middle Leah Lawrence.

Good news for Oregon State is the return of sophomore outside Mary-Kate Marshall. She recorded almost twice as many kills as the next closest person last season. However, of the four kill leaders behind her, just one returns in 6-5 redshirt junior outside Katelyn Driscoll. They’ll have to get used to a new setter as Tayla Woods moves on.

Iowa State produced a balanced attack last year and it should serve them well again this season as many of the same players are back. Among them are 6-3 junior outside Ciara Capezio and 6-1 senior opposite Mackenzie Bigbee. Junior setter Suzanne Horner returns, as does senior dig leader Caitlin Nolan.

Last season’s block leader Isolde Hannan is the only one of the top five kill leaders from a year ago not back this fall. With sophomore setter Jane Emmenecker back, along with senior libero Janna Krafka, there is going to be plenty of familiarity as the Flyers seek to climb the rankings in 2015.

The Lady Toppers could be on the upswing this season with a lot of returning players. They include last year’s kill leader in 5-10 sophomore outside Alyssa Cavanaugh, 6-0 sophomore setter Jessica Lucas and junior dig leader Georgia O’Connell.

With so many returning players, the Gophers should take a step forward in 2015. Last season’s kill leader in 6-1 senior outside hitter Daly Santana is back, as is 6-1 junior outside Sarah Wilhite, who finished second on the team in kills. The Tapp sisters, Hannah and Paige, also return.