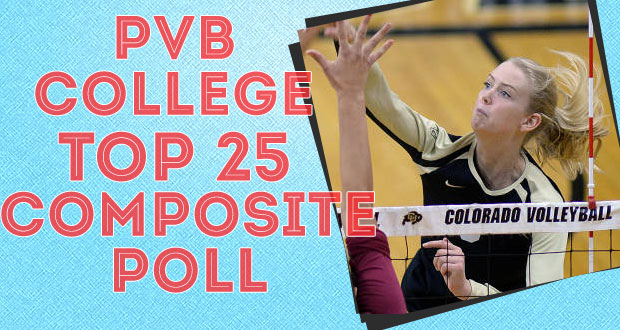 Alright, maybe it’s not that dramatic but there was a change at the top in our latest PrepVolleyball.com Composite PollTM.

With the addition of PrepVolleyball.com’s College Top 50 this season, there are now five rankings that all have their own system to derive at the final listings they do.

The lowest score wins, or in this case, the lowest average.

It was Stanford grabbing the No. 1 position in our initial Composite Poll. However, Stanford only edged Penn State by 0.2 of a point. With Penn State sweeping Stanford on Saturday, it was enough to change Penn State’s rankings, helping its average and moving past Stanford this week.

PrepVolleyball.com and the AVCA Coaches’ Poll had Penn State No. 1 and Stanford at No. 2, but one of the other rankings had Stanford ahead of Penn State, which was No. 6 in that particular ranking and bringing the Nittany Lions’ average down.

Actually, Penn State’s overall average didn’t change. It was Stanford’s average that moved from 1. 8 to 2.6, while Penn State’s remained at 2.

It’ll be interesting to follow the Composite Average throughout the season and see how much movement there is and is not.

For example, I wrote about PrepVolleyball.com’s Top 50 rankings that I didn’t expect to see much fluctuation with the Top 10. Those teams seem on another level from the rest and the Composite Poll reflects much of the same.

The only new team to the Top 10 this week is USC, which moved into a tie with Wisconsin at No. 9. USC was at No. 11 last week, so not a big move for the Trojans.

Meanwhile, Kansas shot up to No. 18 after not being ranked last week. San Diego, Texas A&M and Michigan are also new to the Top 25 this week. Duke, Kentucky, Michigan State and Western Kentucky exited.

It supports what we are saying about the Top 10. There won’t be much movement there, but we’ll see how many teams come and go from the Top 25 overall as the season progresses.