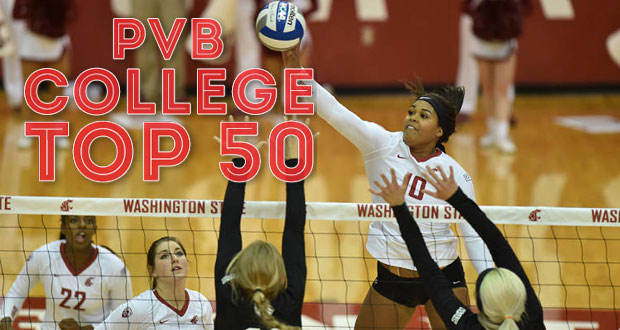 As expected, the bottom of the Top 50 is in shambles.

Conference play is under way and the upsets from last week have made filling out this week’s rankings tougher than usual. It’s just not the bottom though, as Kentucky’s stunning take down of Florida also created another conundrum toward the top of the rankings.

What to do with those two teams? Was the Wildcats winning at Florida enough to jump Kentucky ahead of Florida? Did it wipe away Kentucky’s recent struggles? Or does Florida still remain ahead of Kentucky by virtue of a better overall season to date?

Going into Florida’s home gym and outplaying the Gators the way Kentucky did, the feeling here was it was strong enough for Kentucky to leapfrog Florida and here’s why.

First off, there were other upsets – Santa Clara upending BYU is one example – where the team that lost is still ranked ahead of the winner, like BYU staying ahead of Santa Clara. BYU took a big hit in the rankings this week, but was so far ahead of Santa Clara and was having such a strong season, the drop was enough.

However, Kentucky and Florida were close enough in the rankings – separated by 22 spots – that the Wildcats earned the right to prove they are the better SEC squad. If Kentucky goes on to stumble elsewhere in conference play, Florida will move back in front of Kentucky in the Top 50.

Kentucky does have the opportunity though to stay ahead of Florida by taking care of business.

Any rankings system can have some discrepancies and if you have been following the Top 50 this season, there have been a few. One thing we have held fairly steady with is giving teams the chance to prove their rankings after we feel they’ve earned the shot.

Case in point is No. 19 Pitt, which swept North Carolina last week.

We felt Pitt’s performance this season – with four-game losses to Nebraska and Michigan – warranted Pitt climbing high in the rankings, especially when considering Michigan was undefeated at the time.

Michigan went on to suffer its first loss to North Carolina and fell down in the Top 50 while Pitt remained in the Top 20 when it kept winning after the Michigan loss. There’s one of those discrepancies, where Michigan owns the head-to-head victory over Pitt yet is ranked below Pitt.

Now, Pitt goes on to beat North Carolina, which beat Michigan, which beat Pitt. There’s no way to separate the trio of teams.

Pitt was given the chance to prove its ranking and did so by sweeping North Carolina.

We aren’t here to brag, as we picked North Carolina to win the head-to-head. It shows the Top 50 is put together trying to weight quality wins against quality and non-quality losses and not ranking teams by what we think.

The reason the Top 50 isn’t a reflection of personal feelings is because the Top 50 would hardly ever change. For instance, I think Florida is still a Top 2-3 team in the country despite losing to Kentucky. How boring would the Top 50 be if after big upsets like last week, it didn’t change because I still feel those teams are better.

Missouri, which was undefeated until falling to Saint Louis last week, had climbed to No. 22 in the Top 50. Did I feel Missouri was the 22nd best team in the country? No, I didn’t, but I did feel strongly enough that Missouri earned the right to prove it or not.

Losing to Saint Louis means Missouri didn’t prove it and fell in the rankings. But how far to drop Missouri? Getting back to the bottom of the Top 50, it’s a mess to sort through right now and I suspect it’ll keep getting tougher as the season goes on.

The chain keeps going as long as you want to keep going.

As for a few more random notes, so teams like Stanford, Ohio State, Arizona and Minnesota all suffered conference losses but didn’t drop. In fact, Minnesota actually moved up after losing to Penn State in five games. Playing on the road, the Gophers were the first team to take a set off Penn State this season.

Combined with Minnesota winning in five games on the road at Ohio State, that was enough to move Minnesota into the Top 10 for the first time. Arizona and Stanford losing to undefeated teams are quality losses and weren’t enough to drop the teams.

Ohio State, after losing to Minnesota in five games, rebounded to defeat Wisconsin in five games. With road losses to Ohio State and Penn State, Wisconsin actually climbed up two spots in this week’s rankings.

Teams can control their non-conference schedules, not their conference ones. How many teams would have lost at Ohio State and at Penn State this weekend like Wisconsin did? The majority would have, so the Badgers weren’t punished for two quality road losses.

Click below to see the Top 50 on the next page.