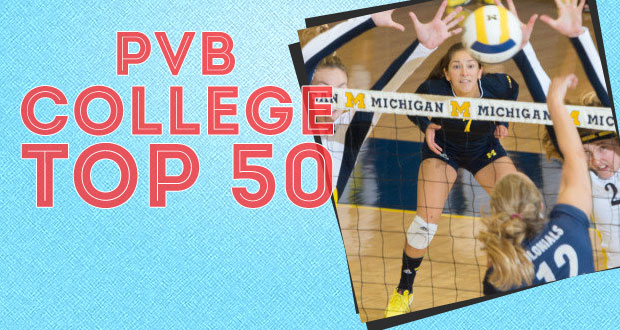 Penn State, Texas, Illinois, Nebraska, USC and Washington were Top-10 teams that didn’t drop a set over the weekend.

Florida, Stanford and Oregon weren’t so fortunate, dropping matches and shaking up the rankings with it.

North Carolina upsetting then No. 3 Stanford in straight sets Thursday assured the Top 10 would have a different look this week. But who saw Hawaii upsetting then No. 2 Florida next? That only guaranteed further shaking up, as two of the Top-5 teams fell.

However, the biggest shock took place with Oregon, which was ranked No. 8 before falling to Texas-San Antonio in four games. North Carolina and Hawaii were in the Top 30 of our rankings last week, whereas Texas-San Antonio was nowhere to be found.

They all raised the issue of what to do?

Florida, by virtue of defeating Texas last weekend, had to remain in the Top 10 despite losing to Hawaii in five games. That’s still a quality loss and beating Texas at Texas is a huge quality win.

A trio of Pac-12 teams jumped ahead of Florida, but the Pac-12 schools will beat up on each other during conference play while the Gators should do well in the SEC and start climbing back inside the Top 5 before long.

Stanford was tougher, because unlike Florida the Cardinal don’t have a victory as strong as Texas. Stanford’s best victory is over Minnesota. Making it more difficult, was the fact the Tar Heels then loss to UNC-Wilmington the next time out.

So one possible jump to make is Stanford isn’t good enough to beat a team that lost to UNC-Wilmington? Beating Duke the next day in five games, it’s clear something isn’t right with Stanford right now but the Cardinal did play against the Tar Heels without Jordan Burgess.

If Stanford gets into Pac-12 play and continues to struggle like it did this weekend, the Cardinal will drop down the rankings sure enough. For now though, they remain inside the Top 10 in a tight call.

As for Oregon, the Ducks dropped mightily because they don’t have a victory as good as Texas or Minnesota. A five-game loss to Nebraska isn’t enough to overcome a loss to Texas-San Antonio, so the Ducks tumbled in the rankings and will have to start their climb back up.

Playing in the Pac-12, Oregon has plenty of chances to skyrocket back into the Top 15, maybe Top 10 again.

After that, the next top team to suffer a defeat was No. 13 Purdue, which fell in five games to Miami. Texas A&M stumbled over the weekend, falling to Iowa and Iowa State. San Diego was another Top-20 squad to go down, but losing to UCLA was a quality loss and the Toreros didn’t drop much.

A team continuing to climb is Ohio State, which knocked off Arizona in four games and is in the Top 15 as a result. It was a test for the Wildcats, but losing to the Buckeyes was a quality loss and Arizona didn’t move in this week’s rankings.

A team that did move and keeps climbing is Michigan, which hasn’t loss yet. Are the Wolverines as good as the No. 13 spot we have them in? Who knows, but the feeling here is Michigan has certainly earned the right to try and prove it so.

Pitt lost to Michigan, but because it’s deemed a quality loss actually moved up to No. 27. Is Pitt that good? Again, who knows. But taking a set off Nebraska and then its only other loss coming to Michigan, we feel Pitt has earned the right to show if it’s that good or not.

A couple teams making their Top 50 debuts are Missouri and Arkansas State, which check in with a combined 18-1 record. Are they as good as our rankings reflect? Probably not, but they have also earned the right to prove it.

Once more, we saw plenty of mixed results in the bottom of the Top 50. Like we said, there’s sure to be plenty of movement all season as teams fight to stay in and/or crack the Top 50. Virginia Tech made its debut last week, but suffered its first loss and fell out.

A quality loss to UCLA and beating LMU helped Virginia climb inside the Top 50 last week, but the Cavaliers lost to Saint Louis and Alabama this week to move back out.