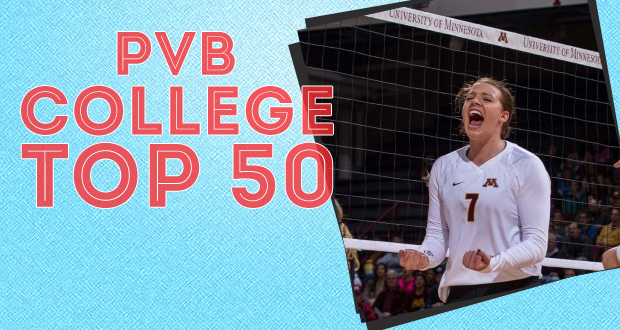 Two weeks in, it’s already looking like there is a huge line drawn in the sand between the contenders and everyone else.

Now, there is still time for teams to be able to get on the right side of that divide and prove themselves as someone to pay attention to as the postseason nears.

I haven’t been able to watch any of the Penn State-Stanford match, as I had to travel for a family wedding this weekend and will be playing catch up via the DVR when I get home late Tuesday night. Yet, judging by the sweep the Nittany Lions delivered, that was a resounding statement, even if it echoed off the walls of their home gym.

(It also means College Court Report is going to be late this week. We strive to have it out by Monday evening, but with the traveling of the weekend, look for it Wednesday.)

Beyond that though, Stanford, Texas, Nebraska, Illinois and Florida might be the only teams able to challenge Penn State based on the first two weeks. USC is still in a bit of a wait-and-see mode. Washington has played one of the easiest schedules around so far. And Wisconsin we are still waiting to learn some more about.

In fact, there are still plenty more questions unanswered than answered.

After a stunning sweep at the hands of Loyola Marymount last weekend, the Bruins go on the road and deliver a huge upset over Hawaii. Ohio State fell to Wyoming last weekend and then knocked off Florida State twice this weekend.

Kentucky fell to Ohio and then Creighton after beating Michigan State last weekend. Michigan State is beat up and fighting injuries but losing so they need to fall down with the Wildcats.

I think the next two weeks are going to be spent separating the top, middle and bottom ends of the Top 50. I feel the bottom 10 teams in the Top 50 are going to fluctuate a lot throughout the season, whereas I don’t think we are going to see too many new teams cracking the Top 10. It’ll mostly be the teams already in the Top 10 just changing spots.

I think we are starting to develop an idea of the Top 20, but teams I moved up this week like Michigan and Arizona haven’t played difficult schedules. Who knows if they are really Top 20 teams? It’s really about sorting out the teams from Nos. 21-40 because that’s where it starts to become a nightmare.

For ranking purposes, the goal is to gauge quality wins, quality losses and non-quality losses against each other and try to make sense of them somewhere in between.

Using UCLA as an example, the Bruins have a non-quality loss against LMU, but a quality win against Hawaii. The idea is to judge whether UCLA’s victory over Hawaii carries more weight than its loss to LMU, or if the loss to LMU still out-weighs upsetting Hawaii.

The rankings below take into consideration the results from Monday-Sunday. For purposes of PrepVolleyball.com’s Top 50 throughout the season, we’ll use the results from this time span as our seven-day period for our weekly rankings.