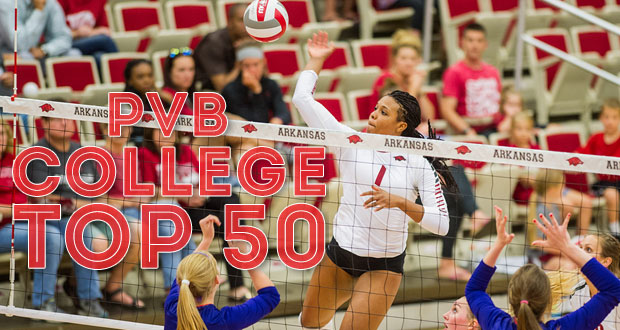 Chanell Clark-Bibbs goes up on the attack for Arkansas. The Razorbacks sprung a huge upset of Wisconsin to crack the Top 50 for the first time this season. (Arkansas Athletics)

We’ll get to the big results in more depth during the College Court Report.

For now, we’ll talk about them in terms of rankings.

But it wasn’t just the big results of last week that shook up things in the Top 50, there were plenty of outcomes that made putting together this week’s list by far the most difficult of the season.

It feels like there could be 50 versions of the Top 50 and none would reflect the rankings any better than the next one.

Arizona State upset Illinois last week, but both were already in the Top 10. Illinois dropped four spots to go below ASU, which climbed one position. Arizona could have made things much harder had it upset Texas, but the Longhorns prevailed in five games.

Therefore, there were no newcomers to the Top 10 this week.

In fact, there was only one newcomer to the Top 50.

That was Arkansas, which launched a giant upset over Wisconsin. Arkansas’ only loss prior to last week came to Kansas during the opening weekend. Arkansas had a chance to skyrocket up the rankings, but besides beating Wisconsin and Kansas State, the Razorbacks lost to Creighton.

That’s just one example of why this week’s Top 50 was hard to construct.

How far to drop Wisconsin?

How to weigh Arkansas’ weekend?

What to do with Creighton, which also beat Kansas State?

It goes on and on.

Michigan was undefeated, but loss handily to North Carolina before taking care of Duke in three. Meanwhile, North Carolina split with the Michigan schools, beating the Wolverines but dropping a four-game decision to Michigan State.

Wichita State had a tough loss to IUPUI.

They all carry points of consideration.

Look at it this way.

Putting together the National HS Rankings presents a challenge because of the lack of crossover results in many cases. Since teams from Texas and California don’t play or squads from Florida and Nebraska, the absent of head-to-head meetings makes it tough to tell who is better.

The College Rankings are the opposite.

All the crossover results make it challenging.

Even teams in the Top 10 like Florida and Stanford have losses to teams outside the Top 10.

Minnesota is ranked above a Texas A&M group it lost to. But that was during the first weekend of the season and the Gophers haven’t lost since. The Aggies, meanwhile, fell to Iowa and Iowa State last weekend.

At that point, Minnesota moved ahead of A&M.

It goes back to measuring quality victories with quality and non-quality losses. Also, the season is a progression. What happened during the opening weekend carries less and less weight the further we get away from it.

Teams are supposed to get better and improve as the season goes on. Holding something against a team that happened way back can’t carry as much weight as what’s been happening recently.

It’s a way of saying this is how we arrived at the convoluted mess of the rankings on the next page.