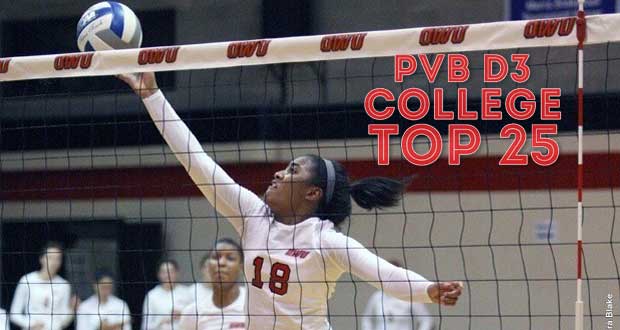 Ohio Wesleyan is one of three teams making their Top 25 debuts this week. Go to Page 2 to see the full rankings. (Ohio Wesleyan Athletics)

However, La Verne remained at No. 10 having lost to the best team in the country so far. Juniata has still not lost to a team in Division 3. Since La Verne owns a victory over No. 11 Claremont, La Verne stayed at 10.

The same couldn’t be said of Wisconsin-Stevens Point, which was dropped from the Top 25 for the first time this season. Stevens Point was No. 14 last week but went down to a pair of unranked teams in Wisconsin- Eau Claire and Wisconsin-La Crosse.

As a result, there was little movement with the top teams.

Most of the movement came with the bottom five teams.

Three fell out along with Stevens Point. They were Mary Washington, St. Mary’s MN and Saint Benedict.

There are four newcomers this week, with three making their debuts and one returning to the rankings.

Hope was in our preseason Top 25 and returns this week at No. 25.

Ohio Wesleyan, Wisconsin-Oshkosh and Ohio Northern are in for the first time.

Go to the next page to see the complete rankings.