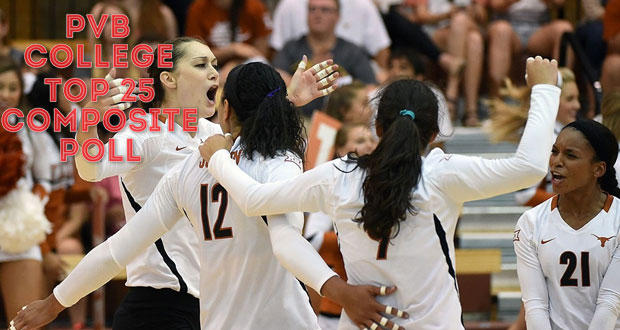 The only place Penn State’s performance is fluctuating this season is in PVB’s College Top 25 Composite PollTM.

Stanford occupied the top spot in our initial poll, only to have Penn State take over the No. 1 spot for Week 2. Despite not losing, Penn State’s strength of schedule has been moving up and down and it’s caused the Nittany Lions to bounce around.

Therefore, Penn State fell into a tie for second place in last week’s Composite Poll as Texas climbed to the top of the list.

Texas remains there this week, joined by Penn State for a tie at the top spot.

The Top 10 remained the same in terms of teams, just a different order. Illinois was No. 8 in last week’s Composite Poll and fell one spot to No. 9 with its loss to Arizona State, which moved up from No. 9 to tied for No. 7.

Again, the five ranking systems we use is our Top 50, the AVCA’s Top 25, Rich Kern’s Top 25 poll and Power Index and the Pablo Rankings. With some of the rankings taking into consideration strength of schedule and factors like that, winning isn’t necessarily enough to keep things status quo.

Ohio State didn’t lose last week, yet its composite average rose from 11.2 to 14.4. As a result, the Buckeyes actually fell from No. 11 into a tie for 12th with BYU.

What hurts a team like Arizona is the Wildcats are ranked No. 63 in the Rich Kern Power Index. The next highest is Purdue at No. 46. Those high numbers obviously drive Arizona and Purdue’s averages up.

Ohio makes its Top 25 debut and was one of the big risers of the week. Ohio dropped its composite average from 37.8 down to 27.2

Minnesota moved up one spot by dropping its average from 19.6 to 16.6.

One team just missing out on the Composite Poll this week was Michigan State. The Spartans average is 31, one point below No. 25 Louisville’s, which is 30.

A team rapidly rising is Arkansas, which is at 34.8 and would be No. 30 right now. It might not be long before the Razorbacks crack the Top 25.

Click on the next page to view the latest Composite Poll.