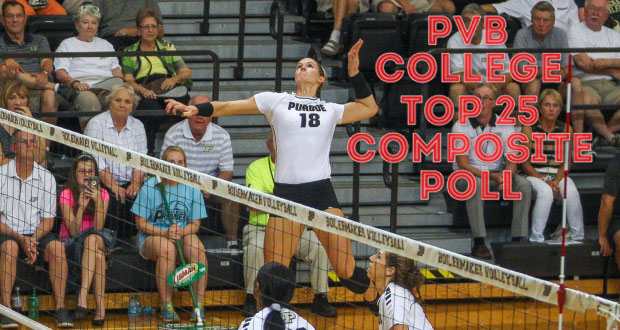 Annie Drews and her Purdue teammates picked up a pair of victories over MIchigan and Michigan State last week to improve one spot in this week’s Composite Poll. (Purdue Athletics)

If one thing has held true through the first five weeks of PrepVolleyball.com’s College Top 25 Composite PollTM, it’s the top spot is a revolving one.

This time it’s undefeated USC, which checked in at No. 3 in last week’s composite poll. After knocking off Stanford on the road, the Trojans’ averaged dropped across the five polls – PrepVolleyball.com’s Top 50, the Rick Kern Poll, the Rick Kern Power Index, the Pablo Rankings and the AVCA Coaches’ Poll.

Penn State’s average actually dropped from 3 to 2.6, but after being tied for No. 1 with Texas last week, the Nittany Lions are alone at No. 2 this week. The Longhorns check in at No. 3, but their average increased slightly from 3 to 3.2.

The rest of the Top 10 features the same teams as last week, just in a different order.

New to the Composite Poll are Arkansas and Arkansas State, which are tied at No. 24 with an average of 28.4.

Dropping out this week was SMU, Missouri and Oregon. All three teams lost last week.

In searching for some sort of trend, one that appears to be emerging is the averages of the top teams continue to decrease.

Arizona State had a composite average of 10 two weeks ago and was ranked No. 9. Last week the number dropped to 8, which pushed the Sun Devils up to No. 7. This week, ASU is ranked No. 6 with an average of 6.6.

Texas was the only team in the Top 6 whose average didn’t fall. Stanford and Florida’s average increased, but both lost. Illinois won both matches but saw its average increase from 9.2 to 9.4.

Looking ahead, we’ll see if Penn State can take over the No. 1 spot again next week. Stanford started off as the No. 1 team, but Penn State took over that spot in the Composite Poll after defeating Stanford the second weekend of the season.

However, Texas dethroned Penn State the next week before the teams were tied at No. 1 last week before USC rose to the top this week.

Click on the next page to see this week’s poll.