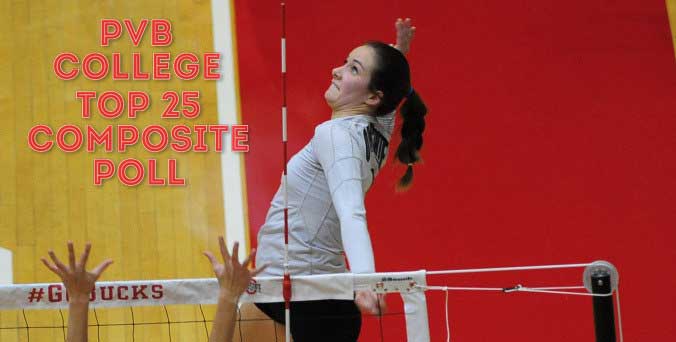 Ohio State is up to a season-best No. 5 in the latest Top 25 Composite Poll. (Ohio State Athletics)

This is USC’s third consecutive week holding the top spot, and second in a row holding a perfect average of 1.0.

Penn State, after a stunning loss to Northwestern, is down to a season-low No. 6. The Nittany Lions’ average dropped from 4.4 to 7.

UCLA returns to the Top 10 this week, while Ohio State cracks the Top 5 for the first time. Minnesota has a Top-10 showing in four of the five rankings – PrepVolleyball.com’s Top 50, the Pablo Rankings and the Rick Kern Power Index and Poll. The Gophers’ No. 11 spot in the AVCA Coaches’ Poll hurts their average. They check in at No. 7 this week, the same as last week.

Illinois tumbled to a season-low No. 17, with its averaging rising from 14 to 18.

Arkansas State is back in the Top 25 this week. The Red Wolves were tied with Arkansas at No. 24 two weeks ago, but just missed out last week with the 26th best average.

Also making its return is Western Kentucky, which appeared at No. 24 in the initial Composite Poll. The Hilltoppers again land at No. 24.

The toughest part about putting together rankings like the PVB Top 50 is all the crossover and mismatched results. One of the many examples includes something like Michigan State beating North Carolina, which beat Michigan and then Michigan and Michigan State splitting their Big Ten series.

Determining a pecking order is hard and it’s not long before teams are ranked ahead of opponents they have lost to.

Given that, let’s see how the Composite Poll is doing in terms of results.

Undefeated USC should be No. 1 and is.

Texas lost to Florida, which is tied for 13th this week with Hawaii, which beat Florida. Clearly, Texas has to be ahead of Florida after the Gators’ recent struggles.

UCLA has losses to USC, Washington and LMU. UCLA is ranked below the Trojans and Huskies in the Composite Poll. UCLA is also ranked ahead of Hawaii, a team the Bruins beat.

Penn State is below Nebraska, but of course ahead of Northwestern.

Michigan is one spot ahead of Ohio, a squad the Wolverines outlasted in five.

Kentucky, at No. 16, is three spots below Florida. The Wildcats do have some prior losses that are likely hurting them in the other rankings. The Gators are also ahead of Arkansas and Missouri, though both sides lost after upsetting Florida.

After Arizona State’s tough week, Stanford is ahead of the Sun Devils.

It seems logical that the results would be mixed in the Composite Poll, just like other rankings.

Go to the next page to see the complete Top 25.