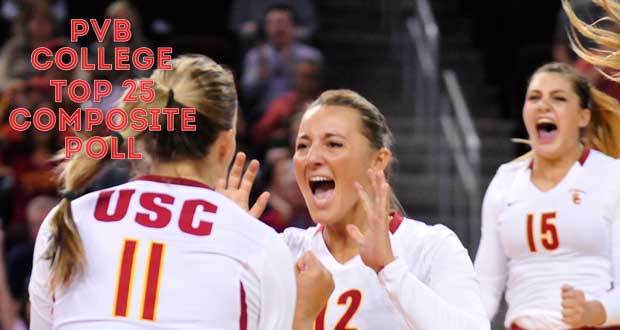 It’s an exciting close to the regular season when it comes to the College Top 25 Composite PollTM this week.

The results proved to be among the wildest of all.

Not only is there six pairs of teams being tied, it was also the lowest-averaging week from the last team to make the Top 25. In Week 6, Ohio came in at No. 25 with an average of 24.4. Arkansas State, which had an average under 25 as well, didn’t make the cut.

This week, Michigan didn’t make the Top 25 with an average of 25.2. That would have placed the Wolverines tied for No. 25 last week and put them at No. 24 two weeks ago.

However, Missouri and North Carolina tied for No. 24 this week and were the cutoff point with an average of 23.8! That’s by far the lowest average of the season in order to break in to the Top 25.

That’s crazy, to see the average to make the poll fall below 24.0.

In other news, Kentucky climbed back in the Top 25 this week, while USC retained its No. 1 spot. Washington and Minnesota stayed tied and in the Top 5. In fact, there were no new entries to the Top 10 this week.

Just as crazy as the low average at the bottom, USC’s average increased from 1.6 to 3.0 and the Trojans still stayed No. 1! Texas and Penn State shared the top spot with an average of 3.0 in Week 4. This week tied with that week for the highest average for the No. 1 team.

It was truly an interesting Top 25.

Go to Page 2 to see the final Composite Poll of the regular season.