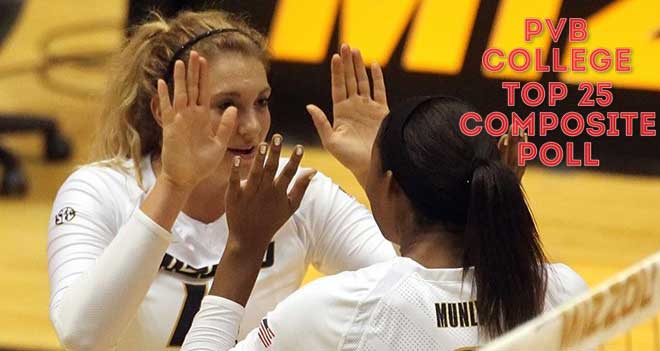 We welcome back Missouri to this week’s Top 25, which returns after upsetting Florida last week. (Missouri Athletics)

History has been made, in more ways than one.

For the first time in the PVB College Top 25 Composite Poll’sTM young existence, there is the same, lone No. 1 for consecutive weeks. Penn State held the top spot for two weeks in a row, but shared it one week with Texas.

USC was the unchallenged No. 1 team in last week’s Composite Poll and makes more history by being the first team to hold an average of 1. That means the Trojans checked in at the top spot in all five rankings used – PVB’s Top 50, the AVCA Top 25, Rich Kern Power Index and Poll and the Pablo Rankings.

There is no disputing the No. 1 team in the land this week.

Changes to the Top 10 this week featured Minnesota and Ohio State climbing aboard, while Illinois and Florida fell out.

Missouri rejoins the Top 25 after upsetting Florida last week, driving its averages back down.

What’s interesting about this week’s poll is the gap between certain spots in the Top 25.

The biggest gap between teams in the Top 10 is between No. 2 Texas and Penn State and Nebraska, which are tied at No. 3. Two full points separate them.

The largest gap overall between teams is with No. 11 UCLA and No. 12 Wisconsin. The Bruins are in front of the Badgers by 2.4 points.

There’s also a distinct distance between No. 25 Ohio and the next closest team in Arkansas State, which trails by a whopping 3.2 points. Consider the difference between No. 24 Missouri and Ohio is .2 points, anything over 3 points is a staggering gap. It’s bigger than any other margin in the Top 25.

That’s a sign the Top 25 has pulled away from the rest of the pack this week.

With losses to Missouri and Arkansas, Florida’s averaging plummeted six points from 9 to 15 as the Gators fell from No. 8 to No. 14.

Click on the next page for the complete Top 25.