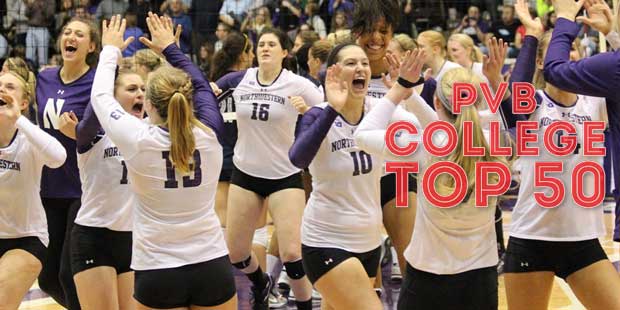 Northwestern, after a stunning upset of Penn State last week, appears in this week’s editon of the College Top 50 Rankings. Go to Page 2 to see where. (Northwestern Athletics)

That was the last time Penn State lost to Northwestern.

The shocking Big Ten upset was the major development of last week.

However big of a gap the Nittany Lions had appeared to open up between themselves and the rest of the pack is gone. Something’s up at Penn State.

Going five with Minnesota and then falling at home in five to Nebraska were viewed as difficult opponents finally giving Penn State a match. With the Nittany Lions handling Illinois in four games earlier last week, it looked as Penn State had worked out the kinks.

The 2015 season began with the feeling of a wide-open race.

Penn State’s start pushed the program well ahead of the rest.

Now, it’s back to being a wide-open chase.

Penn State is obviously still part of the championship pack, just not the favorite it was two weeks ago.

What to do with Penn State in the rankings?

Was losing to Northwestern enough to knock Penn State from the Top 10?

The guess is it won’t happen in the AVCA Coaches’ Poll.

It happened in our latest College Top 50 Rankings though.

Penn State fell out of the Top 10 for the first time.

It’s a bad loss for Penn State, which will have ample opportunities to win its way back into the Top 10. In fact, as shocking as the Northwestern loss was, Penn State is likely to contend for the top spot again by the time the regular season is over.

The other big news from last week was Arizona State losing for the first time(s) – going down to Washington and Washington State after Macey Gardner suffered a leg injury against the former.

It was a terrible way to see the Sun Devils take their first losses of the season. Regardless, they had to drop in the rankings.

USC retains the No. 1 spot for the second week in a row.

Kansas is up to a season-high No. 6, but the Jayhawks have No. 2 Texas looming.

Overall, there wasn’t much change to the Top 50.

Northwestern was the only newcomer, while Syracuse fell out.

Arkansas suffered a defeat to Tennessee to knock the Razorbacks down in the rankings.

Missouri fell to Alabama and moved back down the rankings. Twice the Tigers have climbed inside our Top 25, only to lose the following week.

Other than that, Minnesota and Ohio State join the Top 5 for the first time.

See the complete Top 50 on the next page.