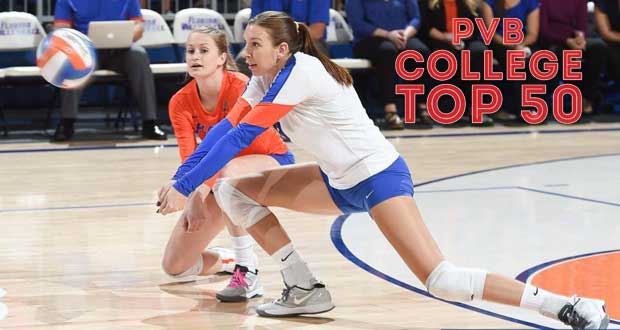 Florida finishes the regular season at No. 10, but how will the Gators show in the postseason? (Florida Athletics)

What did we just see during the final week of the regular season?

With wild results all over, did the holiday week contribute or is this what we can expect when the postseason kicks off later this week?

What we do know is USC, ranked No. 1 in the AVCA Top 25 and No. 2 in our Top 50 last week, fell to cross-town rival UCLA in five games. That shook up the Pac-12 standings to the point where the Trojans were forced to share the title with Washington. With the Huskies the No. 2 team in last week’s AVCA Top 25, watch for the Huskies to move up to No. 1.

Our No. 1 remains the same this week – Wisconsin. The Badgers swept Rutgers and Purdue. With USC losing, Minnesota and Nebraska slid up one spot, along with Washington. Nebraska was barely challenged in sweeping Penn State on Saturday night.

Meanwhile, Purdue was upset by Michigan State, part of a weird week in the B1G. Michigan was stunned by Indiana, but the Wolverines rebounded nicely to down Illinois.

The ACC was wacky as well.

Louisville was swept by Syracuse, but was helped out tremendously when Duke upset North Carolina. Virginia Tech surprised both Pitt and Virginia.

Texas A&M came out on top in the SEC, after holding off Missouri in five.

It made slotting the teams for the final regular-season rankings more difficult than it has been in recent weeks. Not that it matters too much.

With the tournament starting this week, throw all the rankings out the window. The final ones are about to be determined. From what we’ve seen so far, crowning the No. 1 team in a few weeks will be a mystery with plenty of unexpected plot twists.

Go to Page 2 to see the final regular-season rankings.