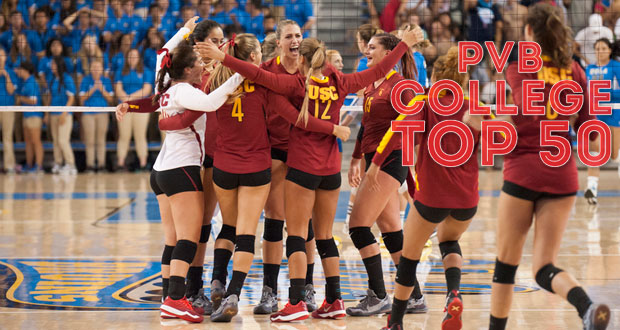 USC climbed to the top of the rankings this week, becoming the first team besides Penn State to be No. 1 this season. (USC Athletics)

Somewhere we can hear CeCe Peniston playing in the background, for finally it has happened.

USC – sitting at 16-0 after beating previously undefeated Washington last week – dethrones Penn State, which had occupied the top spot since the Preseason Rankings were released in August.

It was the wildest week of the season so far, with what in the Florida is going on tops amongst the many developments.

The Gators were ranked No. 8 on Sept. 21, but tumbled to No. 24 this week riding a three-match losing streak. Going down to Kentucky two weeks ago was one thing, but Florida fell to Missouri and Arkansas, both in five games, last week in SEC action.

That created a rankings situation to deal with.

Arkansas was No. 25 last week and climbed five spots this week. Missouri was as high as No. 21 until falling to Saint Louis two weeks ago. But the Tigers’ upset victory over Florida moved them back in to the Top 25 this week.

Last Friday, Nebraska, trailing 0-2 on the road, rallied to down Penn State and give the Nittany Lions their first defeat of the season. However, Nebraska played at Ohio State the next night and lost in five.

Minnesota, meanwhile, scored a key victory over previously No. 7 Illinois.

With USC a clear choice for the No. 1 spot this week, Texas remained at No. 2.

Yet, it was Arizona State taking over the No. 3 position this week after knocking off Stanford in Pac-12 competition last week. That’s when the fun began.

Nebraska took the No. 4 spot based on beating previously undefeated and No. 1 Penn State on the road. That was a tremendous effort by the Huskers and having to turn around and play the Buckeyes the next night was asking a lot.

Penn State slotted in next, then Minnesota and Ohio State. Minnesota earned its victory over Ohio State on the road, so that’s why Ohio State is fourth in the Big Ten pack despite having just beat now No. 4 Nebraska.

Rejoining the Top 10 this week is Wisconsin, which uprooted Illinois.

The other big news from last week’s Top 25 teams were Pitt and Long Beach State losing. Pitt, a week after defeating North Carolina, was undone by Virginia and Virginia Tech. The 49ers went down to Cal Poly.

Pitt fell way down this week, while Long Beach State dropped out of the Top 50 altogether.

A few interesting notes that didn’t impact the rankings too much was Arizona almost upsetting Stanford before losing in five games and Michigan State and Michigan splitting their home-and-home series.

The loss to Stanford didn’t hurt Arizona much in the rankings, while two teams splitting in the same week basically cancelled each other out.

The highest newcomer this week is TCU, which is No. 43 and making its Top 50 debut. Syracuse joins TCU as a newbie, while Santa Clara and Virginia both return to the Top 50.

Click below to the complete rankings on the next page.