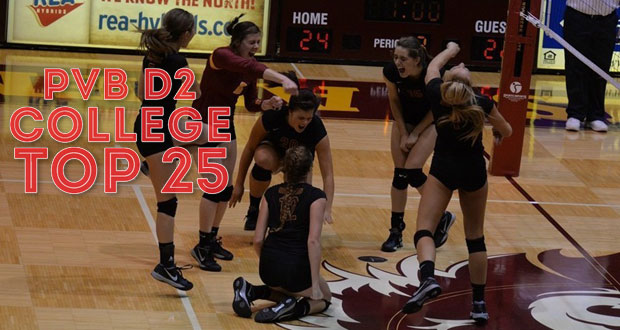 The great thing about the division, is the top teams don’t shy away from playing each other during non-conference action. However, it can make for a rankings nightmare because they all beat up on each other.

You can point to a quality victory as easily as a quality loss with so many of the top teams.

Yet, there remains two undefeated squads from last week’s Top 25 and yet another unbeaten one that joined newly this week after Northern State took down Minnesota-Duluth.

With everyone else holding a loss, the unbeatens have earned the right and so it’s time. All three – Florida Southern and Alaska Anchorage are the other two – reside at the top of this week’s Top 25.

Northern State becomes the third team to occupy the top spot this season, joining preseason No. 1 Concordia-St. Paul and Ferris State, which lost the top spot after losing to Wheeling Jesuit this week.

Florida Southern might not be the No. 2 team in the nation anymore than Northern State is No. 1, but Florida Southern also has chances to prove it coming up with matches against Tampa and Palm Beach Atlantic.

Alaska Anchorage could be slotted too high at No. 3, but with upcoming contests against Central Washington and Western Washington we’ll find out.

Augustana was a big mover, joining the Top 25 this week after beating Wayne State, Winona State. Augustana’s only losses are to Washburn and Southwest Minnesota State.

One of the major upsets of the week came with previously No. 2 Washburn falling to Fort Hays State. It made it tough what to do with Washburn, which dropped out of the Top 10 to No. 11 this week.

Click below to see the Top 25 on the next page.