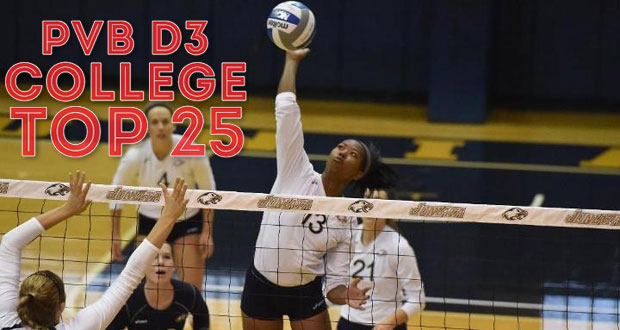 Mar-Jana Phillips and her Juniata teammates take over the No. 1 spot for the first times this season. (Juniata Athletics)

This is the third time we are releasing the Top 25, counting the Preseason Rankings.

For as many times we have a new No. 1 team sitting at top.

Juniata takes over after posting three more victories last week and staying unbeaten so far. With all five teams ahead of Juniata suffering losses, it was the logical thing to do.

It became increasingly harder to slot teams after.

Last week’s No. 1 Emory lost to No. 2 Calvin. It was Calvin that was No. 1 in the Preseason Rankings and Emory No. 2. However, Emory beat Calvin to take over No. 1 before losing this week.

With all but three teams between Nos. 18-25 taking hits last week, there was lots of movement at the bottom of the rankings.

Click below to see the Top 25 on the next page.