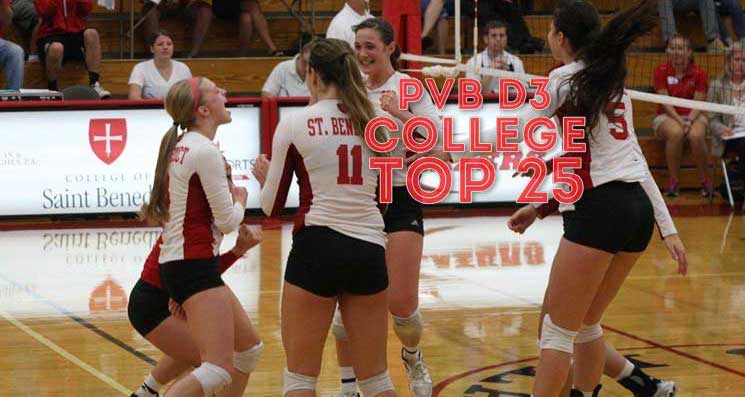 Up until last week, there have been so many Top-10 clashes there was constant movement between the best teams.

However, things calmed down, with the mildest of movement in this week’s Top 10.

The top nine squads from last week all won – well sort of – and remained the same. The sort of stems from No. 1 Juniata actually losing, but it came to Division 2 Clarion in five games. Since Juniata remains undefeated against Division 3 opponents, the top spot didn’t change this week.

Only Carthage, ranked No. 10 last week, went down. The loss to Millikan dropped Carthage down to No. 20 this week. Millikan’s hopes at cracking the Top 25 were dashed when it lost to Adrian the next time out.

The other Top-20 movement featured Berry falling out of the rankings this week with losses to Rhodes and Hendrix, which makes its Top 25 debut.

Saint Benedict is the other newbie this week, also making its season debut and joining Hendrix as the only different entries from last week.

Falling out with Berry was Whitworth after losing to Pacific University and Linfield.

Click the next page to see the new Top 25 Rankings.