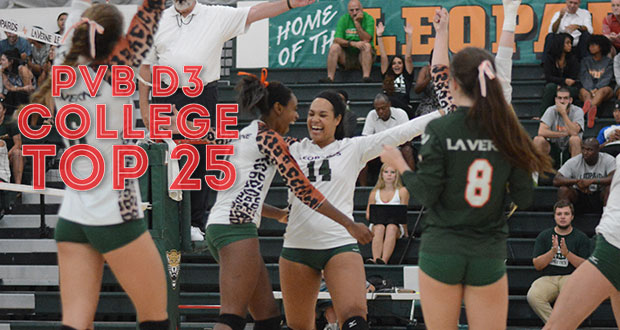 La Verne cracks the Top 25 for the first time this season. Go to Page 2 to see where. (La Verne Athletics)

With so many of the programs inside the Top 25 having played each other, all the crossover results are making for interesting times when it comes to rankings.

One thing remains a sure thing though and that’s Juniata, which remains undefeated and holds down the No. 1 spot for the second straight week.

After that, there was plenty of change.

In fact, besides Juniata, only two other colleges remain where they were situated last week. That is Clarkson and Elmhurst.

The other 22 teams changed positions, including three newcomers to the Top 25 this week in La Verne, Whitworth and Eastern.

La Verne scored a big five-set victory over previously No. 7 Claremont to crack the rankings for the first time. But with 14 of the Top 25 teams from last week losing, it made for tough decisions where to slot teams.

La Verne’s only losses so far are to Carthage and Cal Lutheran.

Carthage lost last week while Cal Lutheran did not. Therefore, even though Carthage defeated Cal Lutheran head-to-head earlier this season, Carthage getting upset by Wisconsin-Whitewater meant Cal Lutheran needed to drop. That’s why Cal Lutheran is ranked ahead of Carthage this week.

Despite the loss to Oshkosh, Whitewater climbed inside the Top 10 this week because of two strong upset victories.

While a chain of events like that made it tough, there were some things that were easy to sort through. Claremont’s other losses this season have been to Carthage, Cal Lutheran and Washington (MO), along with the recent one to La Verne.

All four teams are ranked ahead of Claremont.

If only the rest was so simple.