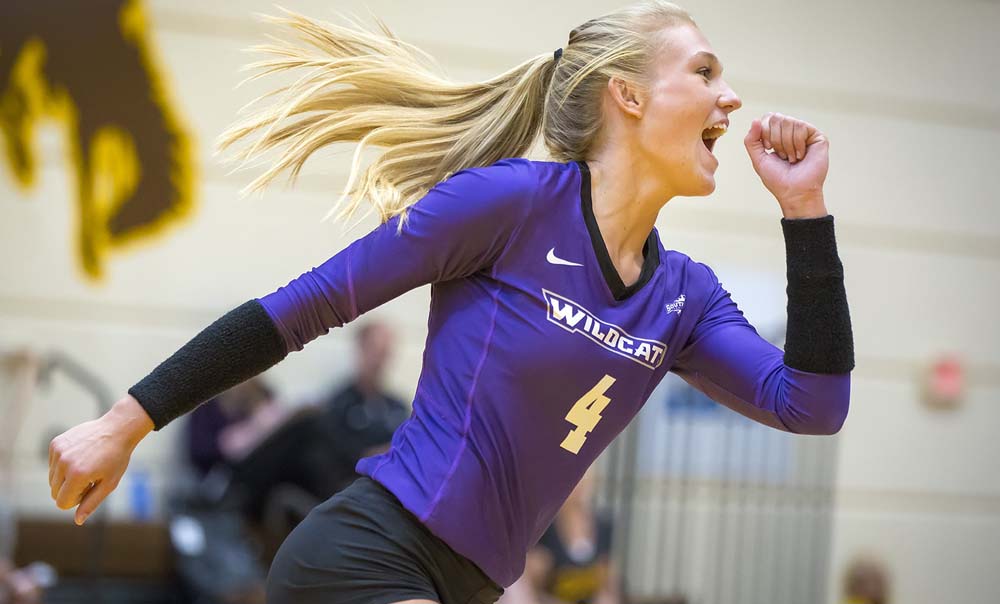 Katelyn Mueller led Abilene Christian to two wins on Friday, including the first nationally of the 2018 season

First kill of the season:

Montana State MB McKayla Landreth at around 9:30 a.m. EDT in a match that went five before the Bobcats downed Canisius College. Landreth, a JUCO transfer, had only one more kill on 10 more swings the rest of the match and hit -.273.

First win of the season:

Abilene Christian, which overcame a Game 1 loss to Georgetown to get by the Hoyas in four sets. Sophomore OH Katelyn Mueller led the way with 19 kills (hitting .421) and 10 digs.

“What an exciting way to start the 2018 season!” exclaimed ACU head coach Angela Mooney. “Overall, it was a really great team win for us. You can’t beat winning the first match of your season. I was happy with our blocking at the net and thought our overall defense did a good job as well. Our serve-receive steadied out and it was nice to see our middles more involved in sets 3-4.”

First five-set win of the season:

Creighton held off two Kentucky match points and scored on its sixth match point opportunity in a 22-20 Game 5 decision over the Wildcats. Senior OH Jaali Winters led the way with 25 kills.

Purdue, No. 24 in PrepVolleyball.com’s “College Top 64,” swept No. 56 Wofford behind 17 kills from senior RS Sherridan Atkinson.

Said Boiler head coach Dave Shondell: “Wofford will win plenty of matches. Colleen Reillyis a high-level middle and the Terriers have plenty of options and size.”

Shondell said there were two keys to victory for his squad: 1) Redshirt freshman Hayley Bush performed like a seasoned veteran; and 2) Purdue’s defensive trio of Brooke Peters, Jena Otec and Marissa Hornung helped hold Wofford to .038 hitting for the match.

First Division I win ever:

Cal Baptist University, which went 29-1 as a Division II school in 2018, made its debut in Division I a success when it swept Louisiana-Monroe at the Starkvegas Classic hosted by Mississippi State. Tesa Oaks and Megan Sester combined for 24 kills in the workmanlike win.

Cal Baptist head coach Branden Higa was an assistant coach at Mississippi State before taking the Cal Baptist job seven years ago. He talked to our Sloane Green about playing Division I and tasting victory at that level.

“Going Division I was always a vision of the President,” Higa said. “We went NAIA to Division II and you have to spend five years at Division II before you can apply to become Division I. As soon as the five years hit, we applied. That process takes two years and we were accepted this year and here we are…”

“And it’s really funny because coming into the match this morning, I didn’t talk about it. I did not meet with the team beforehand to do a pre-game anything. For me, it was, they’re excited about Game 1. They didn’t need that added pressure of, who is going to be the first? We just wanted it to feel like another match. And it did. They operated with a lot of poise. They didn’t let the moment affect them.

“But, when they got off the court, I could tell that they all knew what they had just done. It was neat, we celebrated, and we got ice cream afterward.”

First team to improve to 2-0 on the season:

The aforementioned Abilene Christian, which fought back from a 2-1 deficit to knock off Winthrop, 15-13 in the fifth. Setter Kendall Bosse had 43 assists and 16 digs.

Note that the first 2-0 might rather have been Loyola Marymount. After sweeping Rhode Island in the morning, the Lions took a 3-1 afternoon decision off of Hofstra behind 35 kills combined from Sara Kovac and Savannah Slattery.

First rankings upset of the year:

No. 13 Creighton rallied from down two sets to one to defeat No. 6 Kentucky in five, 22-20 in the fifth. The Bluejays outkilled the Wildcats 66 to 49.

First upset by an unranked team over a ranked one:

Below are the true freshmen whom we have learned were or will be on the court as Day 1 starters for their Division I teams.

1. The rankings referred to are PrepVolleyball.com’s “College Top 64,” which debuted last Friday and ranks all 64 teams predicted to receive tournament berths. Other rankings may differ.

2. This year you may find breaking news first on PrepVolleyball.com’s “College Talk” message board, which you can find at this link: https: College Talk Board