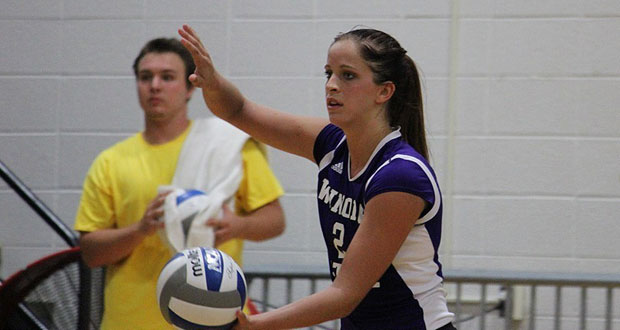 Taylor Goar and her Winona teammates suffered a setback earlier this week, but look to overcome the upset loss by winning a key conference encounter against Wayne State. (Upper Iowa Athletics)

There’s already been a pair of upsets this week.

Those might have been chalked up to ‘trap matches,’ but with hot conference action happening this weekend, there could be more on the way.

We take a look at five, Top-25 showdowns for the weekend:

No. 12 Central Missouri at No. 19 Central Oklahoma – Both teams arrive at this one with only one loss to their records, making it a great start to the Mid-America schedule for them. Central Missouri, which is led by outside Carly Sojka’s 4.36 kills per set, shook off its only defeat to Tampa to win six straight. Central Oklahoma fell to Florida Southern, but have ran off five consecutive victories and are helped by pin hitters Barbara Jackson (3.69 kills per set) and Taylor Bevis (3.08 per set). Central Missouri in 4.

No. 7 Winona State at No. 6 Wayne State – One of two big Northern Sun showdowns on tap, perhaps Winona State was looking forward to it too much. The Warriors were upset by Upper Iowa in four games earlier this week. Not quite on the same level, but Wayne State was also upset as Augustana won in four games. How crazy is that? Now, both teams will look to get back on track, while suddenly one will be one a two-game losing streak. Alyssa Frauendorfer, Elizabeth Genhardt and Katie Hughes are all right around 3.00 kills per set for Winona, while outside Taylor Goar is averaging 4.20 kills per set for Wayne State. Wayne State in 5.