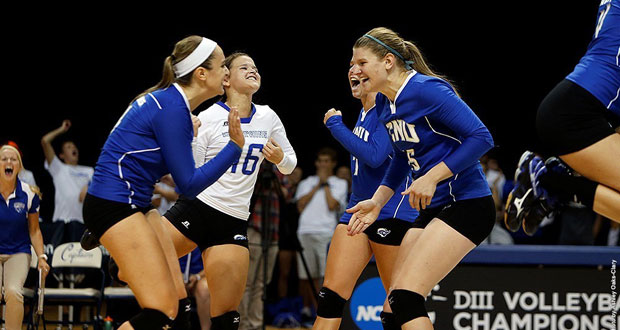 One Top-10 program has already lost during conference play this week.

There are more key conference duels ahead this weekend, as well as a few top non-conference matches as well.

We look at six matches (one bonus) featuring Top 25 teams in action this weekend:

No. 4 Carthage at No. 16 Wisconsin-Whitewater – Another non-conference match up on the slate this weekend, Wisconsin-Whitewater’s strong start to the season was tempered by a Wisconsin Intercollegiate loss to Wisconsin-Oshkosh earlier this week. The Warhawks have a great chance to get back on track in the win department with the pair of opponents scheduled. Lauren Pfeifer is leading Whitewater by averaging 3.20 kills per set. Sydney Racky is averaging 2.71 kills per set and is hitting .327. As for Carthage, it’s only loss so far was an upset one to Hendrix. Since then, Carthage has won seven in a row. Senior outside Emily Heuermann is averaging 3.31 kills per set so far this season. Carthage in 4.

No. 11 Chicago at No. 16 Wisconsin-Whitewater – It’s been a tough week for Chicago, which dropped matches to Dominican and Elmhurst. This one gives Chicago a nice chance to rebound, but it won’t be easy. To get going again, Chicago will turn to senior outside Maren Loe, who is averaging 4.94 kills per set. Chicago in 5.

No. 7 CMS at No. 8 Cal Lutheran – CMS is looking to bounce back in this Southern California Intercollegiate showdown, after losing to conference foe La Verne earlier this week. Cal Lutheran swept Whittier, this after defeating La Verne in five games two weeks ago. Michelle Lawrence and Allie Eason are carrying the offensive load for Cal Lutheran, having combined for over 1,800 attacks and 700 kills so far. CMS spreads it out between the trio of Nicole Kerkhof, Shelbi Stein and Crystal Anderson. CMS in 5.