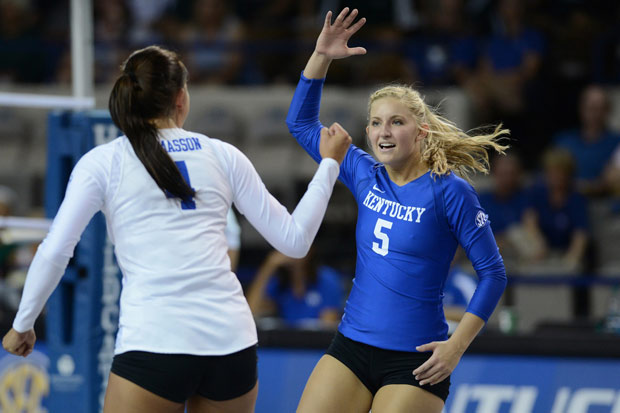 I saw one program doing an hour-by-hour countdown Friday on Twitter.

Twelve hours until first serve. Eleven. Ten … and so on it went until I assume the time hit and the first serve came because, quite honestly, I stopped paying attention to the countdown.

How’s that for an anticlimactic intro?

Friday kicked off the start of the 2015 campaign and clearly people couldn’t wait, marking off the hours until the action was live.

It wasn’t that I didn’t share in other’s enthusiasm, I just couldn’t sit on the edge of my seat in anticipation any longer. I had somewhere to be and it was time to go.

My first journalism experience was as a student at Cal State Fullerton. I covered lots of baseball, basketball and softball, even some tennis, but never volleyball during my days there. Without looking it up I couldn’t tell you who the women’s coach was then.

Ironically, I was sitting in Titan Gym on Friday about to watch a volleyball match. The first official college match that I’m covering for PrepVolleyball.com is in a gym I’ve been in more than any other save my high school one.

Duke, which is ranked No. 24 in our Preseason Top 50, was in town. The only time I ever saw Duke at Cal State Fullerton was on some guy’s hat or T-shirt.

That I would return 11 years later in this capacity would’ve been impossible to predict at the time. Personally, the start of the college volleyball season Friday offered a great opportunity for a moment of reflection.

Speaking of reflections, let’s briefly reflect back on the opening day.

After watching Duke sweep St. Mary’s, I headed to Long Beach State to watch the 49ers square off with Alabama. Long Beach is ranked No. 21 in our Top 50 and Alabama sits at No. 31, so it figured to be a good contest.

I’ll get into more depth and share some quotes later in the weekend, not just from the matches I saw but as much as we can get to elsewhere from over the weekend. For now, here are a few quick hits on the two matches I saw today.

It looked like St. Mary’s was going to be in trouble against Duke. The Gaels have no seniors and just one junior. Duke has tons of experience.

Duke moved last year’s middle Alyse Whitaker to the right side and she was solid in her debut there. She put down seven kills and hit .429 as Duke swept, 25-14, 25-13, 25-23. Freshman middle Leah Meyer had a strong outing for the Blue Devils, with seven kills and hitting .538.

Duke used sophomore Emma Paradiso to set in the back row. Senior Maggie Deichmeister then came in to set across the front row. It’s not a conventional 6-2 but Deichmeister ended up tying for the team lead in blocks with two.

The LBSU-Alabama clash had its moments, as Long Beach prevailed in four, 26-28, 25-22, 25-19, 25-17. Both have some key injuries and are starting freshmen, so it was ragged at times as well. We’ll get into the 49ers’ situation later on like I said, but the injuries they had meant lots of rookies in the lineup Friday.

On top of that, junior outside Nele Barber and senior middle Hayley Benson are transfers and were also playing their first matches ever with Long Beach State. That’s seven players seeing their first action with the 49ers.

Alabama had all the fight and determination, just too many errors and mistakes to gain any traction or consistency. Long Beach accumulated 101 total points, with 35 of them coming from Alabama hitting errors. The Tide missed 22 serves, so Alabama mistakes led to 57 points for Long Beach.

Still, I think Alabama showed some signs to build on. The Tide are still waiting for the return of senior middle Bruna Evangelista from injury. Without her, junior Krystal Rivers shifts from opposite to middle.

If Alabama can get her back and healthy, it’ll help balance out the attack. Freshman Tabitha Brown started at outside for the Tide and could be there for a long time. She knocked down 15 kills and hit .250 on 44 attempts. She also added 11 digs.

Those aren’t spectacular numbers but they are solid enough to give hope for what’s to come down the road.

Glancing around at some other scores: