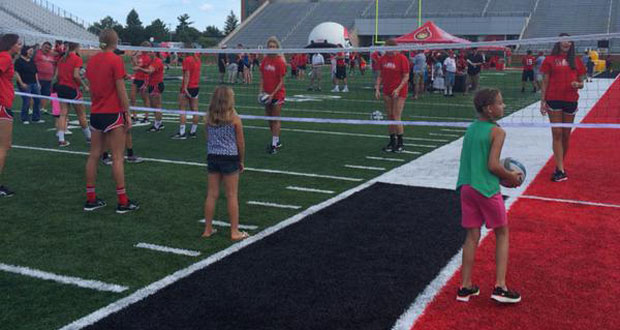 The ladies had a blast signing posters for the Dawg Fans! #GoDawgs #ALLIN #Gproud #CommitToTheG pic.twitter.com/xcO5Nzomal

Ohio State getting away from the court:

Illinois with its version of the spelling bee:

Iowa State had the fire alarm go off at practice and didn’t miss a chance for these pics:

We have been bringing the fire (trucks) at Hilton Coliseum so far this preseason! #Cyclones pic.twitter.com/I4wcgd0rlY

Minnesota with the first practice pics of the season:

#Gophers held their first practice of the 2015 season. Take a look at the day through photos. http://t.co/qdYCrDgQsO pic.twitter.com/NXFDyRlhpz

The Black and Gold Scrimmage is happening now in Holloway Gymnasium. Come join us. #boilerup pic.twitter.com/4lXzKqYcM2

It was autograph day for Iowa:

Meeting some of our young Hawkeye fans this morning at Kids Day! #Hawkeyes #believeNachieve pic.twitter.com/tT8nqgC57f

Indiana having fun with a camp fire:

Michigan had to deal with the rain on photo day:

Butler has a book club:

What did you read this summer?! Mac, Mo, and Ty present The Energy Bus by @JonGordon11 to their fellow teammates pic.twitter.com/KZbuaNZEsw