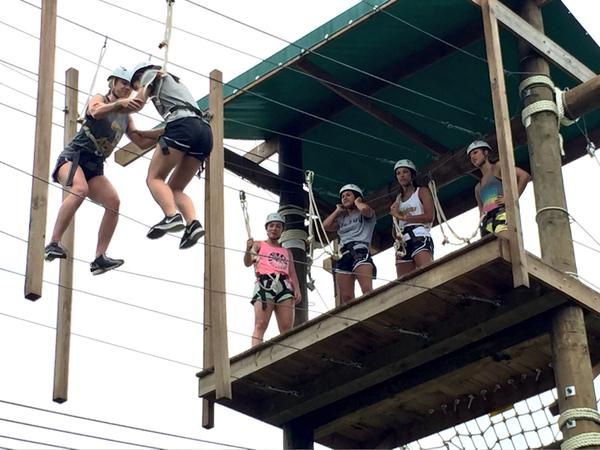 On Sunday, programs across the country got together and spent their days in a variety of ways.

We bring you some of them:

Illinois secured PrepVolleyballcom’s No. 1 Recruiting Class of 2015, no wonder the players are all smiles.

Thanks to the @illininetworkrs esp the Wrights for hosting another amazing kickoff picnic!! @spikesquad pic.twitter.com/AEPBVqcCBX

This is our favorite because it was probably much cooler than anything you did that day. So congrats Missouri, you are Sunday’s hardcore winner.

Not your average Sunday for the Tigers… Thank you @MUVentureOut for having us! #GRIT pic.twitter.com/KPABw4Bi5J

Creighton gets it. Nothing says “We Are Family” more than a backyard team photo.

Enjoyed a nice dinner together before we report tomorrow for preseason! #onemission pic.twitter.com/wGlUWKOpsZ

Does anybody else think Games of Thrones looking at Kansas in this shot? We also spy lots of empty plates. Food must be delicious.

Somebody at Purdue has a camera and isn’t afraid to use it.

ICYMI: We added 4 rookies, had a little photo fun, looked to these leaders & came together as a team #day1 #boilerup pic.twitter.com/Rb8PX7wtoF

Raise your hand if the chairs the Colorado players are sitting in are nicer than the one you have at home? Yeah, me too.

You know what sounds good? Some homecooking, just ask LSU.

Stay tuned for a full gallery of tonight’s gathering! pic.twitter.com/vzYQeMPzrl

Lighten up a little Dayton, this looks a little too studious.

The team is back at it with preseason meetings completed today! Tomorrow: first practice! #UDVB pic.twitter.com/dVVPPyrfjV

Cal having some fun with the effects during its photo shoot.

Let’s hope Auburn doesn’t have quite the same attitude when it comes to leaving for road trips this season.

We can’t tell, but judging by the photo we are pretty sure whoever kicked the field goal nailed it.

The freshmen making the most of their first media day: pic.twitter.com/1Ew9A09Tyb

Iowa sat through many meetings throughout the day. This was one of them.

Someone was super excited about this Ohio State team photo by the lake.

Another team photo, this one right by Mirror Lake! pic.twitter.com/jRNs5uykx4

UCLA brings us this family touch, with parents and freshmen on moving day.

Preseason 2015 is finally here!! And our freshmen players (with help from their lovely families) are all moved in pic.twitter.com/mMK8TIhdkx

USC players together in the team room, doing whatever they are doing.

This looks like a wonderful time, a Penn State picnic party.

What a perfect day for a #PSUVB picnic to kick off the 2015 season! Special thanks to our fabulous booster club! pic.twitter.com/Jt9Y9Tnl5P

We wonder which player on the Wisconsin roster has the nicest handwriting?

What else do you do on your first day? Signing 50-plus volleyballs! Good autograph practice! pic.twitter.com/EspwqNhsPA