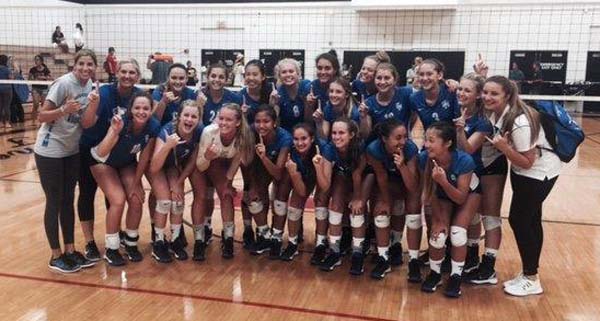 Santa Margarita after winning the Kang on Saturday

In between all the work producing the Class of 2016 Senior Aces, PrepVolleyball.com takes a look at volleyball tournaments and matches of significance that took place last weekend.

We’ll start in Indianapolis, where our No. 1 team, Indianapolis Cathedral, took on No. 11 Louisville Assumption in a barnburner on Saturday that went five sets. Assumption won when these teams played last year. The four-set loss dropped the Irish from their national No. 1 perch for the rest of the year.

Cathedral, seeking revenge, won the first two sets, both close, to take a commanding lead. Assumption won the next two, also close, to force a fifth and deciding set, which Cathedral won. Here is a well-written and detailed account of the match from the Cathedral point of view:

There was no better place in the country to watch prep volleyball than at Indianapolis Cathedral H.S. on Saturday night. The evening featured two nationally ranked teams; the #1 ranked Lady Irish and the 11th ranked Assumption Rockets from Louisville KY.  Both teams are #1 in their respective states and have enjoyed a rivalry for almost 20 years. In the majority of those years the Rockets have finished on top. It’s been a long time since the Irish defeated Assumption. In the time that has passed since its last win, Cathedral has won three state championships, finished state runner up three times and saw Coach Jean Kesterson net her 800th win. In fact, the last time the Irish took home a win, the Cathedral Class of 2016 was starting kindergarten!

When the two teams last met, in Kentucky in 2014, the Irish went into that match as the #1 team in the nation and Assumption was #9. Assumption upset the Irish 3-1. This year the kindergartners turned seniors were not about to allow that to happen again and they didn’t. The Irish extinguished the Rockets in an epic five-set match, winning 25-20, 25-22, 23-25, 22-25 and 15-8.

The atmosphere inside the Welch Activity Center (WAC) was electric. The stands were packed with Irish fans including alumni and an amazing student section featuring the Irish Leprechaun. There was a large contingency from Assumption as well as multiple Division 1 college coaches, other high school coaches, and even the Depauw University women’s volleyball team made the trip to watch. The only one missing was Associate Coach Rhonda Low who was recuperating at home from a round of chemo and no doubt readying herself to watch the live-stream. Knowing Low would be watching gave the Irish the extra motivation needed to secure the win.

Sophomore Mattie Norris started the match with strong serves followed by kills from seniors Anna Jensen, Megan Sloan and Audrey Adams and the Irish were quickly up 4-1. As expected with a team like Assumption, the Rockets would quickly regroup and find their rhythm.  After some amazing back court play from both teams the score was tied at 16. The Irish pulled ahead with an ace serve from senior Meaghan Koors and a couple of monster kills by junior Nia Parker-Robinson to lead 22-18. Norris ended the set with a tough topspin serve resulting in an error by the Rockets.

Set 2 started with a bang when Assumption delivered a cannon-ball like serve to junior Payton White which then ricocheted off an Adams ‘chicken wing,’ making Sloan hit the floor for an incredible save to send the ball over the net. Sloan quickly hopped to her feet in time to put up a huge block giving the Irish their first point and establishing the tone for an exciting second set. Junior setter Maria Schorr, taking full advantage of her many weapons throughout the match, quickly demonstrated she has her own arsenal as she put down a kill followed by a winning joust at the net. The Irish were up 6-1. Again the Rockets would not back down and went on a roll to inch ahead 13-10 causing Coach Kesterson to call a time-out. After much back and forth and tremendous volleyball play, the set was tied 17-17, causing Assumption to call its own timeout. The Irish quickly went up 20-18 and, once again, the legendary Assumption coach, Ron Kordes, used his last time out to try to calm his team, which worked, albeit briefly. With a score of 22-22, the Rockets committed two errors creating set point, followed by a quick set from Schorr to Adams in the middle, who slammed it down to put Cathedral up two sets.

Sets 3 and 4 would prove to be almost identical except that Assumption would get the wins 25-23 and 25-22. The losses of these two sets were not without some benefits for the Irish fans. Besides amazing volleyball action, we saw Schorr’s ability to run the floor, the powerful arm of Parker-Robinson, the flying ability of Koors, great defense from specialists Jasmine Smith and Payton White and an impressive Irish block up front. Kendall White even found time to host a defensive showcase with dig after dig and save after save.  The Irish would need to rely on all of it, including a momentum shift, if they wanted to win the fifth and final set.

The fifth set began with a 2-2 tie and then the momentum shifted…..toward the Irish. With Koors serving aggressively, Adams delivered a kill then a huge one-on-one block and Parker-Robinson added two giant kills, the Irish were up 6-2. Time out Assumption. After another Koors serve, Schorr produced her own block and the lead grew. Assumption fought back and earned a few more points but Schorr found Parker-Robinson twice more and Kendall White aced. Cathedral was building a lead. With Kendall White still serving, Parker-Robinson, who finished with a team-high 22 kills, scored twice more as the Irish grew its advantage to seven at 12-5. With the score at 14-8 and Assumption back to serve, Cathedral fans were loudly and anxiously waiting for their beloved Irish to take this match. A perfect serve receive from libero Kendall White allowed Schorr to deliver a back set to Sloan, who tooled the block, giving the Irish an incredible victory.

Both teams gave everything they possibly could and no volleyball fan could have asked for anything better. After the teams shook hands, the Irish student section stormed the floor surrounding their Lady Irish. Finally, in the tradition that is Cathedral, a chorus of the Irish fight song filled the gym.

Another showdown involving Kentucky powers occurred on Sunday as No. 17 Sacred Heart Academy took on No. 52 Mercy Academy, the defending state and national champions. This one, played on Heart’s home turf, went to the Valkyries in four over Mercy, 25-23, 29-31, 25-23, 27-25, in a match that was every bit as close as the score indicated.

“That was a big win for us in a rivalry game with a great atmosphere,” Sacred Heart head coach Eric Garvey told Paul Najjar of catholicsports.net. “It was good to get our first big rivalry game behind us. These packed gyms and this atmosphere can be a real challenge for first-time players. I’m pleased with the way so many of them stepped up.”

Junior OH Paige Hammons, who played sparingly in Sacred Heart’s first few matches after returning from a stint in Peru with the USA Youth National Team, was front and center in this one, delivering 22 kills. Senior setter Anna Zwiebel, No. 92 in the Senior Aces, added 43 assists, three kills and four blocks. Junior libero Megan Crush shined in her first big match in the contrasting uniform.

Mercy was led by senior setter Megan Elmore and senior front court standouts Ashton Meckle and Madison Mudd. The Jaguars were without RS Ellie Burke, who was nursing an ankle injury.

Heart takes on No. 29 Notre Dame Academy on Thursday after the Panthers take on No. 16 Mount Notre Dame, the reigning Ohio Division I champions, today. Mercy faced No. 14 Cardinal Gibbons, a North Carolina power, on Friday.

In Texas, the surprises continued when unranked Allen captured the Allen Texas Open title over a field that included five nationally-ranked teams, including two teams, No. 3 Lovejoy and No. 5 Southlake Carroll, in our top five. Here’s a report from LoneStarVolleyball.com head honcho Scott White:

For the second weekend in a row, a team that didn’t even make the playoffs in 2014 proved that this year isn’t last year. Last week it was Plano West, taking third at the Adidas Volleyball Invitational in Pearland. This weekend it was Allen’s Eagles taking down that same Plano West team in the semifinals, then following with a 25-23, 25-21 sweep of Southlake Carroll to win their own Texas Open title.

Explosive Allen OH Chandler Atwood was named MVP and sophomore teammate Alina Lin was named the event’s Outstanding Setter. But it was far from a two-player effort.

The Eagles controlled both sets, thanks to the dominating inside play of Meryn Kennedy and Natalie Fry, coupled with a ferocious outside attack led by Lauren Moussaid, sophomore Amara Dike and Atwood. Any time Megan Porter, Asjia O’Neal, Remy Fairchild or Haley Hallgren would try to lead a Carroll comeback, the Allen big front line stepped up to quickly cool the threat.

For example, in the opening set Carroll rallied from 22-17 down to a 23-23 tie on an Elizabeth Augustini stuff. But Moussaid, who missed last season with an injury, answered with a blast then a net Carroll violation caused by the Allen front line gave the Eagles the set. In the second, Kennedy, Moussaid and Dike went back-to-back-to-back to put Allen up 23-18, only to see Hallgren and O’Neal lead Carroll to within 23-21. But again Moussaid and the front line stepped up to end the threat and give Allen the title.

Out west, way west, No. 48 Santa Margarita avenged an earlier loss to No. 24 Punahou by defeating the Buffanblu in three sets on Saturday to win the Ann Kang Invitational in Honolulu. The event is a scrimmage for Southern California teams but counts for the Hawaiian squads.

“We played at a very high level throughout the week,” said Eagle coach Katy Daly. “Our ball control allowed us to spread out our offense and really execute from all areas.”

In another key Southern California scrimmage, No. 41 Mira Costa bested No. 25 Great Oak and others to win the Queen’s Court event in Orange County.

Finally, in the Early Bird Tournament in Knoxville, Tennessee’s two nationally-ranked schools, No, 27 Brentwood and No. 55 Webb School, met for the first time this season with Webb (13-0) taking the straight-set win over the Bruins (9-1), who played without OH Kamryn Carter, a sprained ankle victim during warmups. Freshman Kayleigh Hames led the way with nine kills in the win over Brentwood. Webb went on to win the tourney, defeating defending Georgia AAA champ Blessed Trinity in the final match. Others playing well for Webb included Frances Harrison, Scout McClerran and Nicklin Hames.