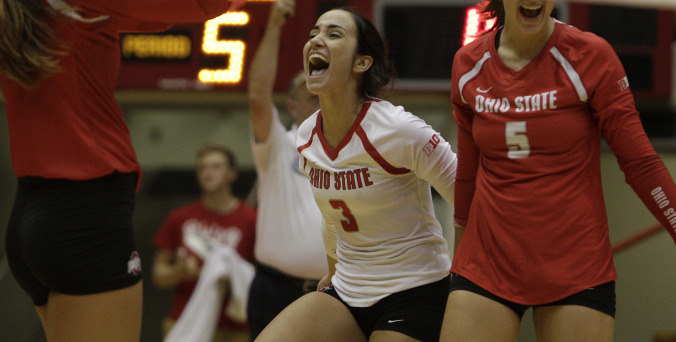 Carlisa May, Arkansas State, Fr – May had an outstanding offensive weekend for the Red Wolves as she was the team’s kill leader during four matches. She dropped 60 kills (4.29 per set) on a .379 hitting percentage with only 16 errors in a 4-0 week for the Red Wolves. She recorded hitting percentages of .423 and above in three of the four matches. She had a season-high 21 kills against Missouri State, hitting .425. She made All-Tournament honors at the Golden Hurricane Classic after picking up 39 kills in the three matches there. She had 15 kills (5.00 per set) against Stephen F. Austin and had a career-best .478 attacking percentage against Tulsa.

Leah Mikesky, Rice, RJr – Mikesky was at her best in the biggest showdown of the weekend, as Rice upset Colorado for the program’s first victory over a Top-25 opponent since 2009. After totaling 49 kills and averaging 4.08 kills per set, she took home tournament MVP honors. She had a tremendous performance against Sam Houston State, registering 20 kills and a career-high 19 digs. For the season, Mikesky is averaging 3.98 points per set. Megan Theiller, Fairfield, Soph – Theiller led the Stags with 3.62 kills per set and a .258 hitting percentage, adding a team-high five aces and ranking second on the team with 2.69 digs per set. Fairfield defeated Holy Cross and Boston College in day one action before dropping a four-set decision to two-time reigning America East Champion and preseason favorite New Hampshire on Saturday. Theiller posted a double-double in all three outing, beginning with 17 kills and 11 digs in the four-set victory over Holy Cross. She added three blocks and two aces. In the Stags’ highlight of the weekend – a five-set triumph over Boston College – she put down 14 kills and hit .278, with 11 digs, two blocks, an ace and an assist. Theiller capped the weekend with 16 kills, hitting .400 to go with 13 digs, a solo block, two aces and an assist. Lianna Sybeldon, Washington, Sr – Sybeldon helped the Huskies climb to 8-0 with three sweeps last week where she averaged 1.89 blocks per set. It helped the Washington defense hold its opponents to a combined .054 attack percentage. She also contributed offensively, putting up 2.33 kills per set with a .500 hitting percentage for a 3.33 points per set average.

Abby Cole, Michigan, Jr – The Wolverines remained unbeaten on the season thanks in part to the play of Cole last week. In helping Michigan to victories over Pittsburgh, South Carolina and Western Michigan, she was named tournament MVP after finishing with a .567 hitting percentage. Posting double-doubles in each contest, she finished the week averaging 4.2 kills per set. She put away 14 swings and hit .478 against Pitt. She torched Western Michigan for a .688 hitting percentage and recorded 12 kills. Chiaka Ogbogu, Texas, Jr – Ogbogu’s .621 hitting percentage during the Longhorns’ three matches topped the Big 12 Conference. She ranked second for the week in points with an average of 4.94 and third in kills with 4.11 per set. The middle blocker hit over .500 in Texas’ three sweeps, making just one error on 58 attempts with 37 kills. She opened the weekend with a .583 hitting mark against UTSA, then followed that with a .609 clip against Santa Clara. She closed out her performance by hitting .727 against Colorado State.

Nikki Taylor, Hawaii, Jr – Taylor is the first player to earn our weekly honors for the second time this season. It’s for good reason, as Hawaii upset Florida and handed the Gators their only loss of the season so far. She picked up tournament Most Outstanding Player honors by averaging 4.75 kills, 2.25 digs, 1.33 blocks and 0.75 service aces per. She also hit .252 with a tournament-high 57 kills, adding 27 digs, 16 blocks and nine service aces. Against Florida, she went for a career-best 27 kills and a season-high 17 digs. Mikaela Foecke, Nebraska, Fr – Going for a .550 hitting percentage in three victories, Foecke garner the tournament’s MVP award. She reached double-digit kills in all three contests, including a weekend-high of 13 against South Florida. In addition, she hit .632 against Georgia Tech with 12 kills. Carina Hoff, North Florida, Jr – Hoff dominated the Osprey attack, finishing the week with a 4.20 kills per set average. After recording six kills in one set against Bethune-Cookman, Hoff recorded 16 in a victory over Campbell and 20 against Florida Atlantic, both new career-highs. For the week, her hitting percentage was .418 and she earned MVP honors of the Courtyard Mayo Classic. Adrien Wohlschlaeger, Arkansas, Jr – Wohlschlaeger averaged 12.33 assists per set during Arkansas’ undefeated run at the Razorback Invitational, leading the team to a .327 hitting percentage. She notched a career-high 44 assists in a straight-set victory against UT Arlington. Wohlschlaeger also matched her career high with five digs in the weekend-opening sweep of Northwestern State.

Corie Bain, Harvard, Jr – Named to the Harvard Invitational All-Tournament Team after averaging 2.44 kills, 5.67 assists, 3.44 digs and 0.78 blocks per set over three matches, Bain nabbed her 17th career triple-double in the opener against Rutgers. In that one, she recorded 11 kills, 24 assists and 10 digs. For the week, she totaled 51 assists, 31 digs and 22 kills.

Loxley Keala, Iowa, Jr – Last weekend was a huge one for the Hawkeyes in taking down Iowa State and Texas A&M and Keala’s fingerprints were all over it. She tallied 40 or more assists in all three matches. It featured going for a season-high 57 against the Aggies. For the weekend, she averaged 14.00 assists per set.

Allie Kellerman, Marshall, Jr – Wrapping up the Panther Invitational Championship MVP award, Kellerman was a defensive anchor for Marshall. The Louisville product recorded 93 digs throughout the tournament, including a season-high 36 against Davidson. Kellerman averaged 6.64 digs per set over the weekend. Molly Sauer, Louisville, Fr – Sauer was named to the All-Active Ankle Challenge Tournament team after helping Louisville go 3-0 over the weekend. She concluded the three contests with 61 digs, including 30 digs in the Cardinals’ win over Ohio on Saturday and 31 total digs in two sweeps against Utah and Seton Hall. She also helped the team offensively, recording nine aces and seven assists.

Valeria Leon, Ohio State, Jr – No Buckeyes player has recorded more kills in a four-game result than Leon after her performance last week. In the team’s victory over Arizona, she went for a career-high 35 digs. It was the second-highest total in Ohio State history regardless of match length. She was named tournament MVP. For the weekend, she averaged 6.5 digs per set.