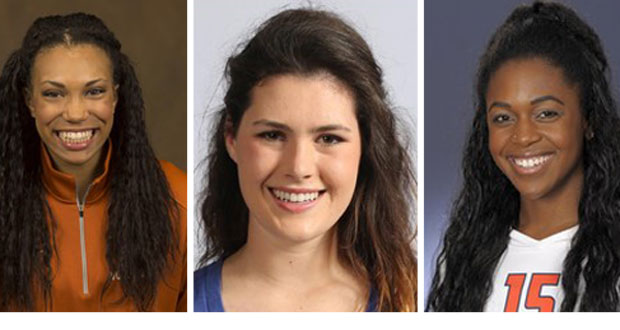 We could spend the entire season writing just about transfers, as there a ton of them.

Look at it this way, if we wrote about one transfer a day for the rest of the season, we would only get to about 75 percent of them that took place in Division 1. And that doesn’t include any players moving from two-year colleges to four-year ones.

The awesome contributors on VolleyTalk have listed a total of 164 D1 transfers. There are probably a few more that flew under the radar.

We didn’t examine every one of them. We did go through and identify what we thought we some notable ones.

An amazing campaign to begin her collegiate career helped Nwanebu garner National Freshman Player of the Year honors from both the AVCA and Volleyball Magazine. She finished her sophomore season averaging 3.12 kills/set before transferring to Texas in the offseason.

Nwanebu’s arrival gives Texas three of PrepVolleyball.com’s Top 10 Senior Aces from the Class of 2013. Club teammate at TAV Chiaka Ogbogu was listed highest among the trio at No. 6. Nwanebu came in at No. 7 and setter Chloe Collins at No. 10.

That’s on top of having PrepVolleyball.com’s No. 1 Senior Ace from the Class of 2012 in 6-3 middle Molly McCage. With last year’s right-side attacker Khat Bell gone to graduation, Nwanebu’s presence fills an immediate void.

“Everyone involved in our program is thrilled that Ebony chose to be a Longhorn,” said Texas coach Jerritt Elliott in the school’s press release. “She brings great values to our program and The University of Texas. She is one of the premier players in the country and has the ability to take over matches with her physicality and volleyball IQ. I know our terrific fan base will love seeing her compete with the talent on our team.”

Starting 17 matches last year as a freshman at USC, Gillis comes to Wisconsin for her sophomore season and should fit right in to the Badgers’ plan. Wisconsin lost two of its three top kill leaders and that’s where Gillis figures to help pick up the slack.

She was named PrepVolleyball.com’s No. 7 Senior Ace in the Class of 2014 and went on to win the Gatorade State Player of the Year honors for Indiana that season.

“I’ve watched Lauryn play for years and the first thing that jumps out at you while watching her on the court is her competitive drive,” said Wisconsin coach Kelly Sheffield in the school’s press release. “A lot of Muncie kids have that, but hers always seemed to be at a different level. She played on great club teams for years, so she has an understanding of the work that it takes to play at a high level. She’s a high energy kid that can play in a faster tempo system very well. She makes the game easier for others with her all-around skills.

“The thing I really like is that when I talk to former coaches about her they all say the same thing, that as good of a player that Lauryn is, she’s an even better person. We’re getting an experienced player that has the values that we believe in and will fit in with the culture here.”

Holman won’t be able to play this season and must redshirt after transferring from LSU. Transfer rules allow players to compete the following season if a release is granted by the former school, but it doesn’t sound like that was the case here.

Here is what Nebraska coach John Cook told Rural Radio Network in April: “Bottom line is Briana is the only transfer out of over 50 transfers in volleyball this year not to receive her release. There is more to this than her not being released. Now on some different fronts people are starting to question why LSU will not let her play this season. There are discussions going on, we have to plan on her not being available this season however.”

Back in January, Holman was preparing for the possibility of having to sit out after transferring. Here’s what she told World Herald Correspondent Jeff Sheldon about potentially sitting out in 2015: “Obviously it’s not going to be easy but I’m going to work hard, train, build skills and build that chemistry with my teammates so when I step on the court it’s all natural.”

What Nebraska would have this season if Holman could play is someone who led LSU in kills and had twice as many blocks as the next closest player. While Nebraska will have Holman for two more years starting in 2016, the Tigers will miss Holman’s production and have a huge gap that needs filling. She was PrepVolleyball.com’s No. 32 Class of 2013 Senior Ace.

The Spartans are receiving a boost with Bailey showing up this fall. She was the 2013 Big East Freshman of the Year and followed that up by earning conference Player of the Year honors last year as a sophomore. She pounded out a program record 576 kills for Marquette last season.

“Autumn is an outstanding player who is well skilled in every area. She is a high flyer who is dynamic, aggressive and passionate,” said Michigan State coach Cathy George in the school’s press release.

With Liz McMahon moving on, there could be a spot on the right side for Crittenden at Illinois. She appeared in 59 matches for the Ducks the past two seasons before moving onto to Illinois.

“Naya’s a great athlete,” said Illinois coach Kevin Hambly in a press release. “She brings a physical presence that we lost with McMahon(`s graduation). Time will tell about how she fits into our system. I think she’s actually a really good fit for how we play and how we want to play, but you never know until they’re here. Mostly, I think she fits us culturally, and she wants to come and work hard and work on her game and become a complete player. We’re excited to have kids like that, that are athletic and want to be a part of that.”

Long Beach State lost a pair of transfers in Alex Reid and Joy Miley. Reid, who last year finished second on the team in kills as a junior, is now at Colorado State. Meanwhile, Miley headed to Marquette, which in return lost a player to Long Beach State. Nele Barber, a junior from Germany, ended second in kills for Marquette last season and will help ease the loss of Reid for Long Beach.

Christina Ambrose, a 5-11 redshirt freshman outside hitter who was No. 20 on PrepVolleyball.com’s 2014 Senior Aces, switched schools from Purdue to Florida State. Ambrose sat out last year at Purdue and comes back to her hometown state, where she played club volleyball for OVA.

Niki Withers, a 6-0 sophomore outside hitter, left Cal State Fullerton after her freshman season and is now at USC. With USC losing some players, Withers could factor into the plans right away.

Maddie Haggerty, a 6-2 freshman outside, arrives at UCF after redshirting last season at Nebraska. Haggerty was PrepVolleyball.com’s No. 18 Senior Ace for the Class of 2014. That’s the highest ever for a player at UCF.

Taylr McNeil, a 6-2 sophomore outside hitter, is now at Iowa. She spent her freshman season leading South Carolina in kills per set.

Kadi Kullerkann, a 6-4 senior outside, left Houston and is now at Pitt. With 309 kills last season for the Cougars, Kullerkann could come in and make contributions right away for the Panthers.

Sofia Lavin, a 6-2 senior outside, played in 45 matches in two seasons at San Diego before coming to Northwestern, where she could help boost the Wildcats’ attack.

Cassidy Pickrell, a 6-1 junior outside, switched schools, going from UCI to Arizona State. She brings depth to the Sun Devils lineup. Her transfers coincides with the arrival of her younger sister, Kylie, who is a freshman at ASU.

Bri Holmes, a 5-10 junior outside, is now at Tennessee. She was the kill leader at UC Riverside in 2014.

Gabby Benda, a 6-0 sophomore setter, led Marquette in assists last year in her rookie season. However, she left there and is at Georgia Tech for the upcoming season.

Sara Blaiser, a 6-1 junior setter, arrives at Marquette for the fall campaign. She was at Rice last season, where she led the conference by averaging 11.07 assists per set.