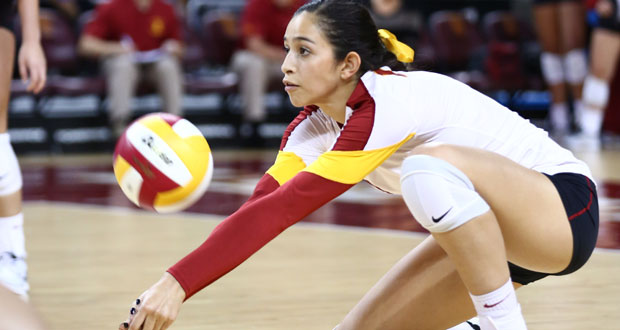 Sam Bricio and No. 14 USC have a huge opening weekend, taking on No. 8 North Carolina and No. 22 BYU. (Jon Kondrath, USC Sports Information)

What else is there to say other than it’s time.

The countdown began weeks ago, as teams propelled toward the start of the 2015 season.

Friday is the first official day of action.

We sort through all the madness of the weekend, highlighting some of the biggest matches and making our predictions.

No. 2 Stanford v No. 42 Texas A&M – The Aggies are improved this fall and will be eager to gauge themselves against Stanford. The Cardinal will get tested but won’t falter. Stanford in 4.

No. 7 Illinois v No. 44 Louisville – Louisville is another team that is better than it was last year. It’s a good chance to see where the Cardinals are at currently. Illinois in 3.

No. 8 North Carolina v No. 14 USC – Tough match for the Trojans. The guess is the Tar Heels are further along earlier in the season. North Carolina in 3.

No. 9 Florida State v No. 35 Oklahoma – What out for this one. The Seminoles have some new pieces. The Sooners have basically the same team back. We are going upset. Oklahoma in 5.

No. 12 Washington v Gonzaga – The Huskies will showcase their new look in this one. They’ll also take care of business. Washington in 3.

No. 17 Michigan State v No. 20 Kentucky – One of the premier matches of the weekend, this one favors the Spartans. Kentucky has more new parts to work in than Michigan State, which wins in 4.

No. 21 Long Beach State v No. 31 Alabama – PrepVolleyball.com will be in the house for this one. And it should be an amazing start to the season for both teams. Alabama brings a lot back. Long Beach State is going to have a new look. We want to call upset here. The only thing is Long Beach is playing at home. Long Beach in 5.

No. 32 Miami v No. 43 Illinois State – Another Top 50 showdown for the opening day. Illinois State takes on a brand new look for this season, while the Hurricanes have some familiar pieces back. Miami in 4.

No. 5 Texas v No. 33 LSU – The Longhorns end their weekend against LSU, the toughest team face to over the first two days. Texas will stumble a bit but prevail. Texas in 4.

No. 7 Illinois v No. 40 Creighton – Creighton has enough young parts it could be climbing up the rankings before too long, but the Fighting Illini likely represent too big an obstacle to dodge right now. Illinois in 4.

No. 8 North Carolina v No. 22 BYU – A featured match of the day, the action is going to be hot and PrepVolleyball.com will be on the spot to see it. The Tar Heels will continue their strong start to the season. North Carolina in 4.

No. 9 Florida State v No. 25 Colorado – The Seminoles tough opening weekend continues with this Top 25 showdown against Colorado. Florida State gets it done and wins in 3.

No. 21 Long Beach State v No. 24 Duke – Somebody will lose their first match of the season here. It should be a point-for-point

No. 25 Colorado v No. 34 Oklahoma – This is an intriguing matchup and the outcome is sure to help shape the new Top 50 on Monday. Colorado proves too tough in this one and wins in 5.

No. 26 Minnesota v No. 42 Texas A&M – This could be a fun contest, but if the Gophers are playing well for early in the season they should be able to handle the Aggies. Minnesota in 3.

No. 31 Alabama v Pepperdine – It’ll be interesting to see what Pepperdine looks like and Alabama offers a pretty good measuring stick. Alabama in 4.

No. 32 Miami v No. 41 Kansas State – A Top 50 meeting between teams looking to make the next step this season. We like the Wildcats pulling the upset. Kansas State in 4.

No. 40 Creighton v No. 44 Louisville – This could be a close contest. We like it to go five games. Louisville wins.

No. 2 Stanford v No. 26 Minnesota – One of the top clashes of the weekend, it’s a great way to prepare for start of the NFL getting closer. There promises to be big hits and plenty of defense in this one. Stanford in 4.

No. 16 Hawaii v No. 27 Oregon State – Hawaii should be improved this season and that’s not a good thing for the Beavers. Hawaii in 3.