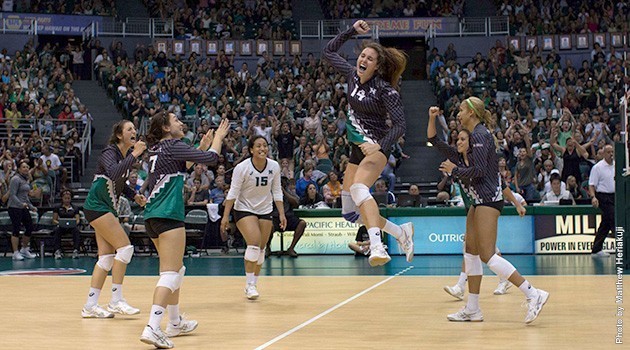 Hawaii reacts to its upset victory over No. 2 Florida. (Hawaii Athletics)

Another day, another Top-10 shocker.

On a weekend when we were supposed to be finding out more about teams and perhaps gaining some clarity, the exact opposite is happening.

Upsetting Stanford, a day later North Carolina was upset itself by UNCW on Friday. Then Florida, looking as good as anyone in the country goes down to a Hawaii bunch coming off a loss to UCLA.

The Bruins might actually be providing some clarity, because after losing to LMU they’ve won every match. UCLA beating Hawaii and then the Rainbow Wahine downing Florida reflects well on UCLA.

Sure, we can talk about the travel the Gators went through and the distraction a road trip like it presents. Florida certainly wasn’t the first and won’t be the last to get stung by those circumstances.

Running through a few of Friday’s results:

A strong block team like Florida needs to finish with more than 10 total in a five-set match. The Gators posted 16.5 blocks in their four-game victory over Texas last week. One area where Hawaii was much better than Florida was service errors, as Hawaii missed just five serves and finished with six aces. Florida also had six aces, but missed 12 serves.

Hawaii also had 22 more swings than Florida, which despite hitting for a lower percentage meant Hawaii finished with eight more kills than Florida.

Both sides received big outings from their opposites, as Nikki Taylor led Hawaii with 27 kills. She also had 17 digs and hit .254. Alex Holston had a team-high 19 kills for the Gators, hitting .283 and 10 digs.

No. 3 Stanford d No. 38 Duke 25-17, 22-25, 25-17, 23-25, 15-10 – Needing five games, the Cardinal avoided losing their third consecutive match and second straight upset against a game Duke squad. Outside Jordan Burgess returned to the lineup but was still limited offensively, finishing with four kills on 26 swings. She did finish second in digs with 18, as libero Halland McKenna led the way with 23.

Instead, it was a heavy dose of Merete Lutz out of the middle, as she racked up 15 kills on 45 swings. That was the second-most on the team and one more than outside Brittany Howard, who finished with 11 kills on 44 swings. Freshman Hayley Hodson regained her touch and paced Stanford with 17 kills on 48 attempts and hitting .333.

Emily Sklar was key for Duke, pounding down 27 kills and making 12 digs. Freshman DS Kelli Kalinoski also had a monster outing, registering a career-high 26 digs. But that wasn’t even the most on her team, as libero Sasha Karelov cashed in 29 saves.

Clearly, Stanford needs Burgess to be 100 percent or the struggles are going to continue. But she’s not going to be able to help much in slowing down opposing middles. For the third straight match the Cardinal were hurt in that area. Jordan Tucker and Leah Meyer combined for 27 kills on 63 swings.

No. 48 Iowa State d No. 17 Texas AM 25-16, 25-16, 23-25, 25-20 – The good for the Cyclones. The Aggies have been playing well to open the season and this was a setback few saw coming. Iowa State is still playing without Suzanne Horner and turned to Monique Harris to run a 5-1 in the upset. Samara West was clutch for the Cyclones, going for 13 kills and hitting .478. Ciara Capezio led Iowa State with 15 kills. The Aggies struggled attacking, committing 29 hitting errors.

UNC Wilmington d No. 26 North Carolina 17-25, 25-20, 20-25, 25-20, 15-13 – Nothing takes the thrill of upsetting Stanford away like losing a match like this. The Tar Heels have to be left wondering what’s going on. It could be as simple as not dealing with the emotional high of defeating Stanford and getting complacent against Wilmington. But something like that should happen. After hitting well against the Cardinal, the Tar Heels returned to their norm and hit .148 in defeat. Wilmington only hit .140 as team, with Nicole Lott going for a team-high 17 kills and hitting .145. Hayley McCorkle led North Carolina with 19 kills.

No. 31 Wichita State d No. 44 Kentucky 25-14, 24-26, 15-25, 25-23, 15-12 – PrepVolleyball.com’s rankings held firm in this one. The question now will Kentucky finally fall from the AVCA coaches’ poll or not? The Shockers really didn’t shock in this one, not if you’ve noticed Kentucky’s struggles of late. Katie Reilly was instrumental in the victory, leading Wichita State with a career-high 19 kills. The senior middle hit .563 as well, to go with two blocks and six digs. It nullified solid performances from Darian Mack (16 kills), Sharay Barnes (16 kills) and Kaz Brown (15 kills).