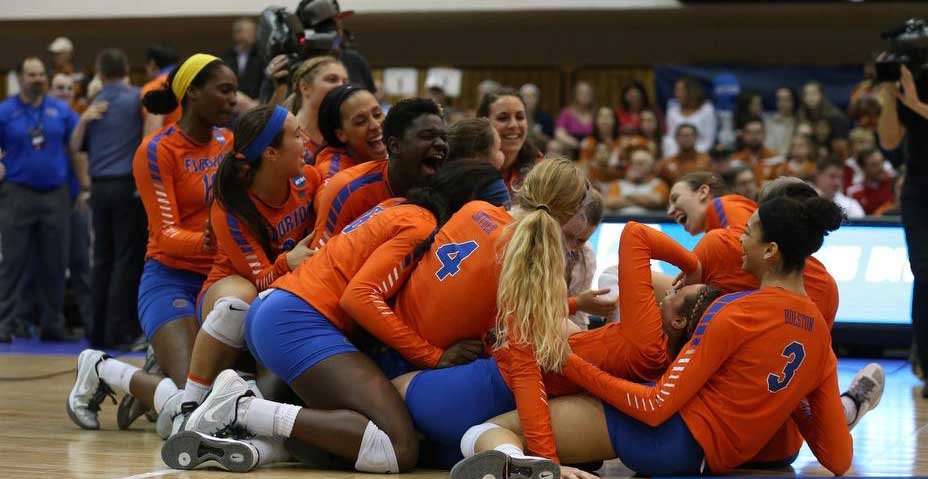 The sophomore middle finished with a career-high 24 kills and seven blocks. The biggest stuff came with the score tied at 12 all in the fifth.

“This just shows that the Gators are at a whole new level for this tournament,’” senior setter Mackenzie Dagostino told the GatorZone.com’s Scott Carter. “We are a team that really thrives off our blocks. It absolutely pumped our side up. Having that leg up there, 13-12, was a sign this is our match.”

Former MAVBC teammate Alex Holston had a huge night as well, dropping 20 kills on the Badgers.

Wisconsin outsides Kelli Bates (21 kills) and Lauryn Gillis (20) had big nights, but Florida hitting .349 was one key to the Gators’ victory.

“That’s a hard one to lose. That’s a hard one in the locker room,” Wisconsin coach Kelly Sheffield said. “We were just two teams battling so hard. We had it taken to us in set one. It was anything they wanted. You don’t often see 21 kills in the first set. We were having a tough time defensively and I felt that we just kept battling and battling. We had some errors there in the second set. We fall behind 0-2, and we just start battling.

“And Florida was battling as well. I thought they were battling hard to get to Game 5. We were battling for a fifth. I don’t think they have won a fifth set this year, so they are also wrestling with some demons and also falling behind 0-2. Both teams were just putting it all out on the line.”

There was one more contest to go the distance.

Elizabeth Campbell recorded 24 kills for the Buckeyes, while setter Taylor Hughes made a team-high 22 digs.

“What a tremendous amount of heart from this team,” Washington coach Keegan Cook said. “Not a whole lot of things went well or smooth in this match. We got out-dug and out-hit. To still come out with a win, it takes a lot of intangibles. It’s a big deal.

“To bounce back from that fourth set says something about us. I think we’re all happy that we get a chance to play again tomorrow and that this wasn’t our last match together. We haven’t played our best match yet, so tomorrow is that chance.”

“I don’t know if Minnesota actually started scouting us until halfway through the second game,” Hawai’i coach Dave Shoji said. “It’s an honor to be here in the first place. It is an honor to play Penn State. They have an unbelievable program and Russ is an unbelievable coach. We feel honored to be in the game, more than honored to win the match.”

In other regionals, both Minnesota and Nebraska swept.

The Elite Eight matches Saturday feature two schools from the B1G, Pac-12 and Big 12. The other conferences represented are the SEC and Big West.

The meeting between Texas and Florida is a rematch from earlier this season, when Florida won in four. Meanwhile, Minnesota and Hawaii play in Des Moines.

And in San Diego, the contest between USC and Kansas features the two programs which remained undefeated the longest this season before suffering their first losses.